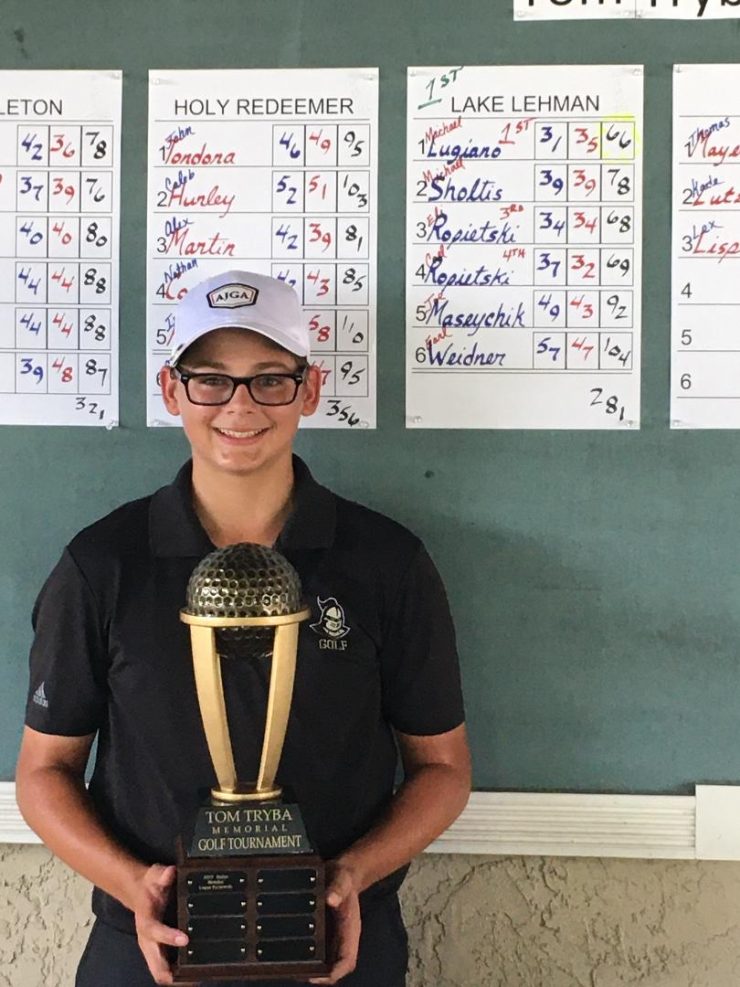 Dallas and Scranton Prep won the two district team titles and also won the top divisions of the two leagues.

From top to bottom, Scranton Prep, Riverside, Lackawanna Trail and Montrose were the four Lackawanna champions.

Hazleton Area and Lake-Lehman won the WVC Division 2 and 3 titles.

Billy Pabst Jr. from North Pocono finished second in the state in Class 3A while Paczewski finished tied for fourth.

Nick Werner from Wyoming Seminary tied for sixth in Class 2A.

James Flickinger from Abington Heights gave District 2 a fourth individual state medalist by tying for eighth in Class 3A.

Dallas finished sixth in the state in the Class 3A boys tournament.

Scranton Prep won 26 of a possible 27 match play points on its way through three rounds of Lackawanna Class 2A playoffs. The Cavaliers downed Forest City, 8½-½, in the quarterfinals, then stopped division champions Riverside, 8½-½, in the semifinals and Montrose, 9-0, in the final.

Riverside was the only team to win on the road in the Class 2A playoffs, beating fourth-seeded Mid Valley in the quarterfinals as the fifth seed.

Dallas avenged its only regular-season loss and defeated Hazleton Area, 323-327, for the WVC’s berth in the district Class 3A final.  Lake-Lehman defeated Hanover Area, 318-350, in Class 2A.

Dallas and Scranton Prep were the No. 1 teams in the final Scranton Golf Center Super Six Power Rankings.

Dallas was followed in Class 3A by No. 2 Abington Heights, No. 3 North Pocono, No. 4 Hazleton Area, No. 5 Crestwood and No. 6 Pittston Area.

Scranton Prep was followed in Class 2A by No. 2 Lake-Lehman, No. 3 Hanover Area No. 4 Riverside, No. 5 Montrose and No. 6 Lackawanna Trail.

Lake-Lehman was the only new division champion. The other six division titles were repeat performances. … Eddie Cimoch retired as Scranton Prep coach at the end of the season with an 83-match Lackawanna regular-season unbeaten streak intact. The Cavaliers are 80-0-3 since losing at Wallenpaupack Sept. 3, 2015. Scranton Prep tied Abington Heights in 2015 and then tied North Pocono and Abington Heights back-to-back in 2020. … Lackawanna Trail ended the season on a 21-match unbeaten streak in the Lackawanna and Montrose on a 15-match winning streak. … Paczewski’s 2-under-par, 69 was the best score during the state team tournament. … Paczewski defeated Pabst in a seven-hole playoff between the previous two champions to determine the district Class 3A title. … The playoff loss was the first of two for Pabst, who shot 2-under, 69 in the state individual tournament, then lost to Downingtown West’s Nick Gross on the second hole of a sudden-death playoff. … Brothers Cael and Eli Ropietski were a big part of Lake-Lehman’s rise to the top of the WVC small schools, but Eli Ropietski did not get to compete in District 2 team or individual tournament play because of an eligibility ruling from the Pennsylvania Interscholastic Athletic Association after transferring from Holy Redeemer in the offseason. … Lugiano passed up playing in the PIAA Championships to instead compete in the Sir Nick Faldo/Hurricane Series event in South Carolina where he won the 14-15-year-old title.