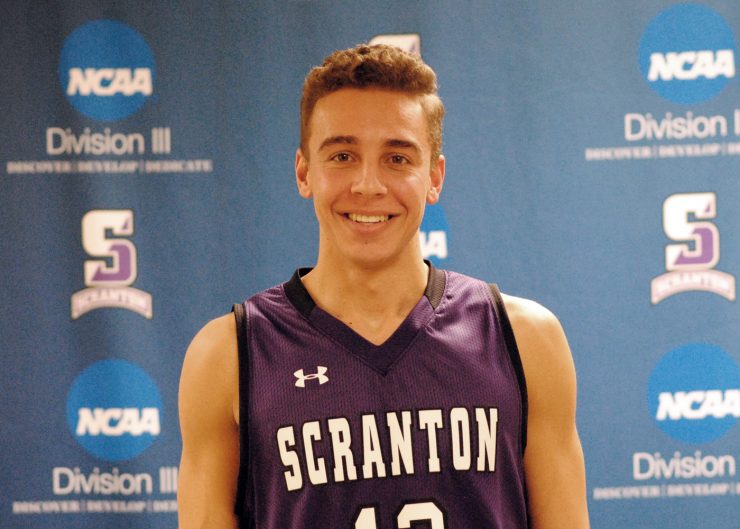 Bailey to play in England

Award-winning University of Scranton graduate Logan Bailey will take advantage of rule changes in Great Britain to play professionally and with a college team simultaneously while pursuing his postgraduate studies.

The Scranton Prep graduate and former JB Hoops AAU player out of Riverfront Sports in Scranton will leave for England in the first few days of September and start a 45-50-game basketball season soon after.

The semi-professional Nottingham Hoods announced the signing of Bailey, the Landmark Conference Player of the Year, online Wednesday.

Bailey will play professionally with the Hoods, a member of Division 1 of the National Basketball League. In addition to playing in the NBL, he will also be able to play with the Nottingham Trent University team while working toward his Master’s Degree.

“I had agreed to play for their school team and get my degree there,” Bailey said. “As I was going through the process, they actually had a rule change in that professional league that would allow me to play in the pro league. At that point, the coach of the pro team reached out to me and asked if I’d like to play for that team as well.

“It kind of all fell together.”

The opportunity came about after Bailey was contacted by the Student Athlete Network, a United Kingdom service that connects North American student-athletes with universities throughout the country to allow them to continue their playing careers while earning a Master’s Degree.

Bailey graduated from Scranton in May with a Bachelor’s Degree in Biology. He plans to pursue his Master’s in biomedical science.

Bailey’s new college coach is an assistant on the pro team and he said, as of now, he is expected to be one of two players who double up.

“I’m honestly kind of just taking it year-by-year at this point,” Bailey said when assessing his basketball future. “The Master’s program and the contract I signed with the team are both one year.”

Bailey has been told to expect a level of play similar to low- to mid-Division I college basketball in the United States.

The Nottingham coaches evaluated him on film when the connections were being made and the club distributed a highlight film of Bailey with the Royals as part of its social media announcements of the signing.

“They said after watching my film that they can use me in multiple positions,” said Bailey, a 6-foot-4 wing player with a knack for attacking the basket.

Bailey missed his freshman season while recovering from surgery for a torn anterior cruciate ligament in his knee and had his senior season shortened by the coronavirus pandemic.

In less than 2½ seasons, Bailey still managed to surpass 1,000 career points by shooting 57.8 percent from the floor, tied for the fourth-best career mark in school history, and averaging 16.2 points, 10th-best ever at Scranton.

Bailey was a three-time, first-team Landmark Conference all-star and was a second-team D3hoops.com All-Region pick as a senior.

Bailey thanked his parents, Todd and Margi, for being “completely supportive” of the plans and helping to make them possible.