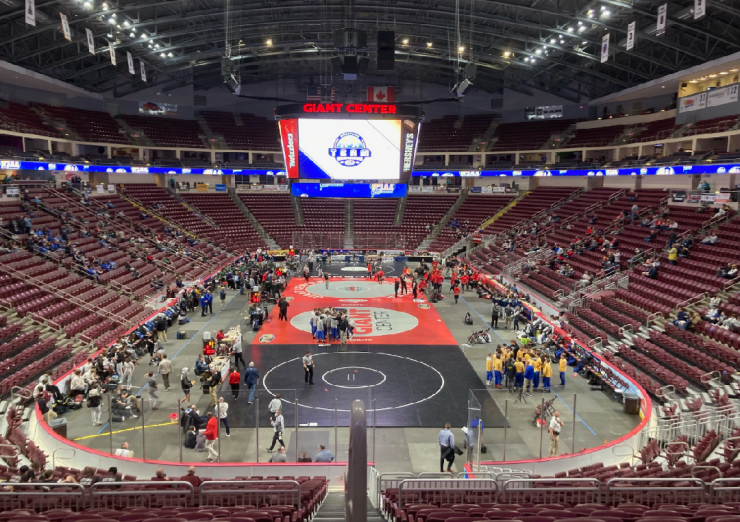 Lackawanna Trail finished in a four-way tie for ninth in the state in Class 2A after splitting two Friday matches in the Pennsylvania Interscholastic Athletic Association Dual Meet Wrestling Championships.

The Lions were eliminated with a 41-21 loss to Brookville in the late-afternoon, second-round consolation match.

Lackawanna Trail began the day by beating Hickory, 38-27, in the first round of consolations. Details on that early-morning match can be found at https://nepasportsnation.com/trail-wins-piaa-consolation-match/.

The Lions made the 20-team tournament field this season after making the pandemic-reduced, 10-team field last season and finishing in a four-way tie for fifth.

Lackawanna Trail led early against Brookville and was tied through nine bouts before losing the last four, two by forfeit.

In a match that started at 138, Michael Bluhm, Deegan Ross and Robbie Schneider produced consecutive wins from 145 to 160 for a 12-3 lead.

Bluhm won by decision in overtime. Ross posted a 6-0 shutout for his decision. Schneider won by pin in 15 seconds.

Houser won a decision and Clarke tied the match with a pin.

The Lions, the No. 1 team in the Riverfront Sports Elite Eight Wrestling Power Rankings of District 2 teams, finished the dual meet portion of their season at 11-2. They repeated as both Lackawanna League Division 2 and District 2 Class 2A champions.

Several Lions will be contenders in the individual tournament season, which begins next weekend with the District 2 Championships at Wilkes-Barre Area.