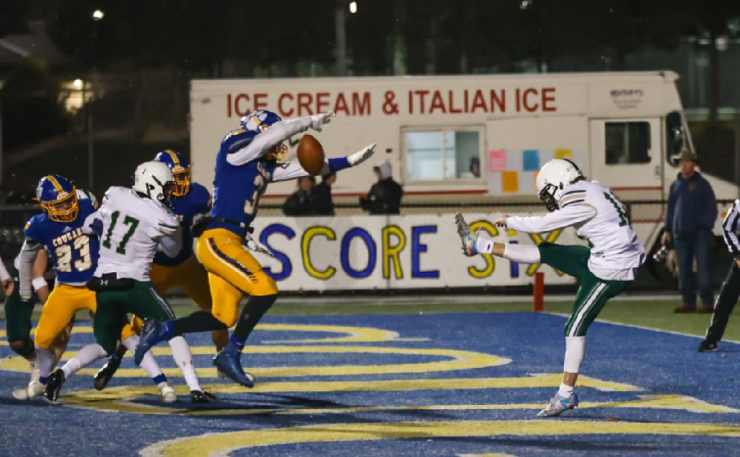 PECKVILLE – Bishop Shanahan overcame 256 all-purpose yards by Connor Hilling and 11 points by the Valley View defense and special teams to knock the District 2 champion Cougars out of the state football playoffs with a 35-25, road victory Friday night in a Pennsylvania Interscholastic Athletic Association Class 4A quarterfinal.

Valley View was driving for the potential tying field goal or winning touchdown in the final minute when Jackson Ercole batted a pass into the air when Sean Bracken picked it off and returned it 77 yards for the clinching score with 16.1 seconds remaining.

The District 1 champion Eagles (11-3) scored two touchdowns in the final 4:48 to rally for the victory.

Hilling ran 20 yards into Bishop Shanahan territory on the next play, but then the yards became difficult for the Cougars as Choi got involved in six of the next seven plays while Dylan Jones and Bracken each had two first hits.

The Eagles forced Valley View to convert a third-and-three and a fourth-and-two to keep the drive alive, but use up most of its time, meaning the Cougars had to burn their last timeout and hurry in the final minute.

On second-and-11, Dominic Memo’s pass was deflected into the air.

Bracken did the rest.

Bishop Shanahan, from Downington, west of Philadelphia, advanced to the state semifinals against Harrisburg Bishop McDevitt by fighting through the back-and-forth game in the bitter cold after a long road trip.

Both teams lost key players to injuries over the course of the battle.

Hilling carried 20 times for 176 yards, including a tying, 80-yard touchdown run in the first half when no other Valley View play produced a first down. He also set up a score with a 71-yard kickoff return.

Colin McGrory ran 4 yards for the first Bishop Shanahan touchdown with 1:26 left in the first quarter.

Hilling tied it with his 80-yard touchdown on the next play.

Hilling’s kickoff return to the Bishop Shanahan 8 set up Memo’s 3-yard touchdown pass to A.J. Kucharski on third-and-goal. Matt Cole added the second of his three extra points for a 14-13 lead.

Valley View took its biggest lead, 21-13, 1:22 before halftime when Shamel Salley and Robert Altieri had the sack that forced a fumble and Jordan Rebar picked it up and returned it 14 yards for a touchdown.

Bishop Shanahan opened the second half with a 49-yard, Jordan-to-McGrory screen pass that led to a 4-yard touchdown from the same combination six plays later. Jordan found Choi for the tying two-pointer with 8:05 left in the third quarter.

Valley View regained the lead with 2:02 left in the third quarter when Jordan struggled with a snap from his 6 and Louis Marion got to him after he recovered, trapping him in the end zone for a safety.

The Cougars pinned the Eagles again and got their second safety when Zack Rudalavage blocked a punt through the back of the end zone with 10:38 remaining.

PHOTO CREDIT: Valley View’s Zack Rudalavage blocks a punt through the back of the end zone for a safety in Friday night’s state playoff game against Bishop Shanahan.

Return to this website for much more coverage on this game from reporter Tom Robinson and photographer Tim Drewes.