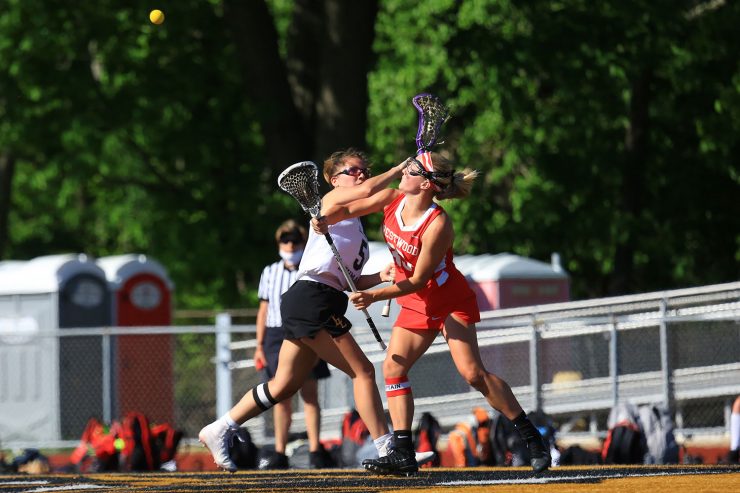 LEHMAN TWP. – Isabella Caporuscio puts the ball in the back of the net more than any girls lacrosse player in District 2.

With her scoring held relatively under control by the Lake-Lehman defense, Caporuscio showed off the other ways her stickwork has helped make Crestwood District 2’s strongest team.

Caporuscio’s four goals, draw control and killing of the clock all contributed to the Lady Comets rallying for a 12-11, road victory in Thursday’s Class 2A district final.

Caporuscio led all scorers in the game with four goals and an assist, pushing her season totals to 124 goals (more than six per game) and 25 assists.

Crestwood trailed by two goals early in the second half, but Caporuscio kept the Lady Comets in near constant possession over the final 16:37. She won 19 of the game’s 25 draws, coming away with control of the ball herself 8 of the times.

“Draws, they win games,” Caporuscio said. “ … They’re something our team works at a lot in practice and something we knew would be crucial today.

“Whatever’s working for us. We have a lot of draw specialists. If I’m not doing well one day, we have someone else step up.”

Caporuscio handled the task herself Thursday, then almost single-handedly ran out the clock when Lake-Lehman closed within a goal with 1:10 left.

After winning yet another draw, Caporuscio held the ball almost every remaining second. Kile called two timeouts when Lake-Lehman closed in on her and Caporuscio ran around the offensive field with as many as five Lady Knights at a time chasing her.

“She did an amazing job,” Kelsey Kulak, who scored three goals, including the game-winner, said of the ball-control show Caporuscio put on in the final minute. “We love her for that.”

Caporuscio and Kulak each scored twice and Julia Glowacki had the other goal while Crestwood was turning a 9-7, second-half deficit into a 12-10 lead.

The comeback was the second of a game that matched the top two teams in the Riverfront Sports Girls Lacrosse Power Rankings of District 2 teams.

Top-ranked Crestwood opened a 5-1 lead before No. 2 Lake-Lehman, which had the top seed and home field based on a better District 2 playoff rating built on a superior overall record, scored 8 of the next 10 goals.

“Lehman’s a really good team, with really good players, individually and as a whole,” Caporuscio said. “We knew we had to move the ball quick.”

They did just that after Carolyn Kaminski gave Lake-Lehman its only multiple-goal lead of the game.

Caporuscio won the draw and, 22 seconds later, Kulak deposited the ball in the upper corner of the goal.

Julia Johnson broke down the right side, creating a two-on-one break, which Caporuscio finished off a pass from Johnson.

Glowacki put Crestwood ahead, but Maddy Raspen tied it back up with 8:10 left.

Caporuscio put Crestwood ahead for good with less than seven minutes left and Kulak scored with 3:33 to go.

Raspen, who led Lake-Lehman with three goals and an assist, converted a free position hit with 1:10 left.

Jill Taleroski scored twice for Crestwood (17-2-1) while Glowacki, Johnson and Helena Jardine had a goal and assist each.

Avery Bogdon made eight saves for the Lady Comets.

Both teams had already clinched berths in the state tournament, which opens Tuesday.