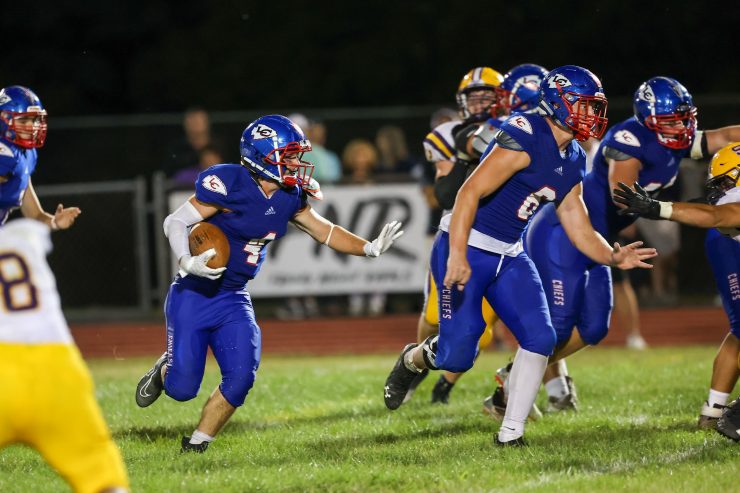 The wait for Opening Night can feel like an eternity.

Lakeland made the most anticipated of the openers seem like it was over in an instant Friday night.

With Dominico Spataro accounted for three touchdowns and intercepting a pass, the Chiefs raced past visiting Scranton Prep, 41-14, in a non-league opener between state-ranked teams that won Lackawanna Football Conference titles a year ago.

The Chiefs scored in just 1:46 and opened leads of 14 points in 7:47, 21 points in the first 19 seconds of the second quarter, 28 points less than two minutes into the second and 33 points with 5:17 still remaining in the first half.

Six different Lakeland players provided the touchdowns as the Chiefs shared the spotlight, the offensive touches and the tackles in the game that matched the top two teams in the preseason Gaughan Auto Store Super Six Power Rankings, compiled by NEPAFootball.com. Lakeland came in No. 2 and Scranton Prep was No. 1, the same spot it had ended the 2021 season.

Spataro carried 12 times for 84 yards and a touchdown while Evan Pochas added 57 yards and the game’s first touchdown on 9 carries.

Spataro went 7-for-11 for 83 yards and 2 touchdowns passing. Four Chiefs each finished with two catches.

Defensively Jon Clauss-Walton made a team-high five tackles and assisted on another while Spataro, Pochas, Andrew Gelderman, Chris Chmiola and Lacota Dippre all contributed to smothering the Scranton Prep offense until after the 33-0 lead had been built.

Jon Seamans returned the opening kickoff 33 yards and the Chiefs, ranked eighth in the state in Class 2A by PennLive.com, were off and running.

Spataro ran 18 yards on third-and-five for the game’s initial first down and Pochas followed a down-field block by Seamans for a 27-yard touchdown two plays later.

The Chiefs forced a three-and-out, got a 19-yard punt return from Kevin Snyder and covered 54 yards in 8 plays for the 14-0 lead.

Spataro moved the chains with an 11-yard run and an 11-yard pass to Dippre, the Holy Cross-bound tight end, then ran it in from the 4.

After Seamans recovered a muffed kickoff, Lakeland missed a chance to score again before the quarter ended.

Dippre’s 50-yard punt, however, pinned Scranton Prep at its 5 and Lakeland took advantage.

When a Cavaliers punt settled behind the line of scrimmage, the Chiefs took over at the 5 and scored on the first play. Dippre lined up at the back of the power-I and bounced through three hits and into the end zone.

Spataro returned his interception 28 yards to the 40.

On second-and-10, Spataro shoveled a pass to Seamans heading left and the speedster cut back to the right flag for the touchdown.

For the second time in the half, Scranton Prep was unable to handle a kickoff and although the Cavaliers defense made it difficult, the Chiefs scored again.

Spataro converted two third downs with his passes. He hit Dippre on an out pattern for 11 yards on third-and-10, then Snyder on the other side for the touchdown on third-and-goal from the 6.

The remainder of the game was played to Scranton Prep’s statistical advantage, but at 33-0, the damage had been done.

To that point, Lakeland had outrushed Scranton Prep, 85-6, and outgained the Cavaliers, 168-8.

Scranton Prep, the ninth-ranked Class 3A team in the state after reaching the Pennsylvania Interscholastic Athletic Association quarterfinals last season, lost Penn State commit and all-state running back London Montgomery to a season-ending knee injury less than a week before the first kickoff.

The Cavaliers came up with their initial first down on what became their first scoring drive on the last possession of the half.

Lakeland built its biggest lead on its first possession of the second half.

Spataro ran 42 yards to the Cavaliers 12, then left the game with a leg cramp.

Rovinsky’s two-point pass from Snyder made it 41-7 with 4:57 left in the third quarter.

Scranton Prep drove 70 yards in 14 plays for a fourth-quarter touchdown. Sophomore Louis Paris, who came off the bench to split quarterback duties, went 6-for-10 for 48 yards passing in the drive, which culminated in his 13-yard pass to Palermo.

Spataro had his interception and assist in the second quarter after coming up with two tackles for losses in the first quarter. Pochas also had a sack and another tackle for a loss while finishing with four tackles and an assist. Gelderman made two tackles, assisted on five and broke up a pass. Chmiola made three tackles and assisted on one while forcing a fumble. Dippre had three tackles, including a sack, and two assists.