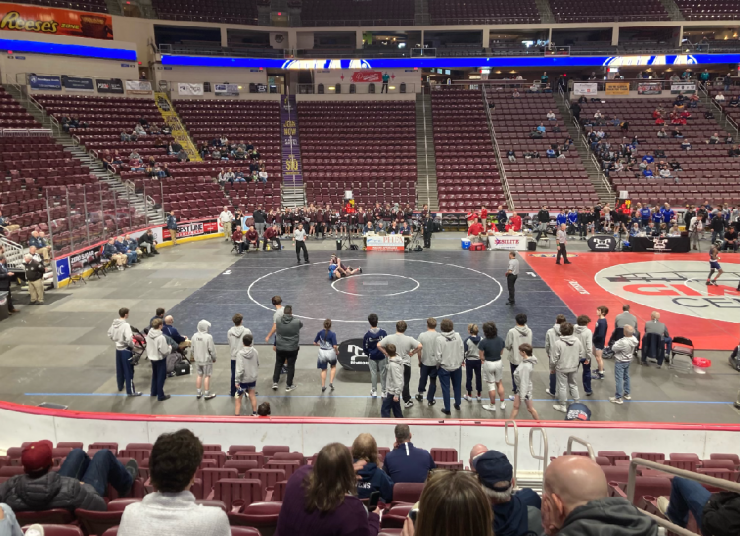 Connellsville used seven pins and a technical fall to end the Abington Heights run at the Pennsylvania Interscholastic Athletic Association Dual Meet Wrestling Championships with a 49-17 victory Saturday morning at the Giant Center in Hershey.

With the consolation quarterfinal loss, the Comets finished tied for seventh in the state in Class 3A, for the best team postseason finish in program history.

A total of 20 teams qualified for the state Class 3A tournament. As District 2 champion, the Comets avoided the pigtail round and were one of 12 teams that advanced directly to Hershey as part of the 16 teams reporting there.

Using a lineup with just four seniors, the Comets went 2-2 in their three days in Hershey, winning twice Friday.

Marzolino, a sophomore, and Sirianni, a junior, each went 4-0.

Smith, another sophomore, finished 3-1 with his only loss coming in a one-point decision.

Saturday’s other win came from freshman Connor Beck in his only appearance in Hershey.

Connellsville, the runner-up of District 7, which encompasses the area surrounding Pittsburgh, improved to 21-3.

The Falcons never trailed, getting a pin from Gabriel Ruggieri and a technical fall from Chad Ozias in the first two bouts at 126 and 132 on the way to a 14-0 lead after the 138-pound bout.

Each Abington Heights bout win was met by at least two Connellsville wins until after outcome was decided.

Smith got Abington Heights on the scoreboard with a 7-3 decision of Chad Jesko at 145 pounds. He improved to 26-6 on the season.

Marzolino ran his record to 26-1 with a 21-5 technical fall over Zachary Bigam in the full five minutes of the bout. He finished the tournament with a pin, two technical falls and a forfeit.

With the outcome decided, Beck was inserted into the lineup at 106 pounds and Sirianni bumped up to 113.

Sirianni put his perfect record on the line against Evan Petrovich (24-9) and needed overtime to produce the 6-4 win. He came into the bout with a pin, technical fall and major decision in the first three rounds and finished the event with a 30-0 season record.

Sirianni scored three of the bout’s four takedowns. One gave him the only points of the first period. He fell behind, 3-2, on Petrovich’s takedown with four seconds left in the second period, but scored another in the third period, then with 37 seconds left in the sudden-victory, first overtime.

The Lackawanna League Division 1 champion Comets are 15-3 overall with one non-league match left against Palisades before the individual tournament portion of the season begins with the District 2 Championships February 25-26 at Wilkes-Barre Area.

More state tournament coverage can be found in the multiple stories at: https://nepasportsnation.com/winter-sports/wrestling/.