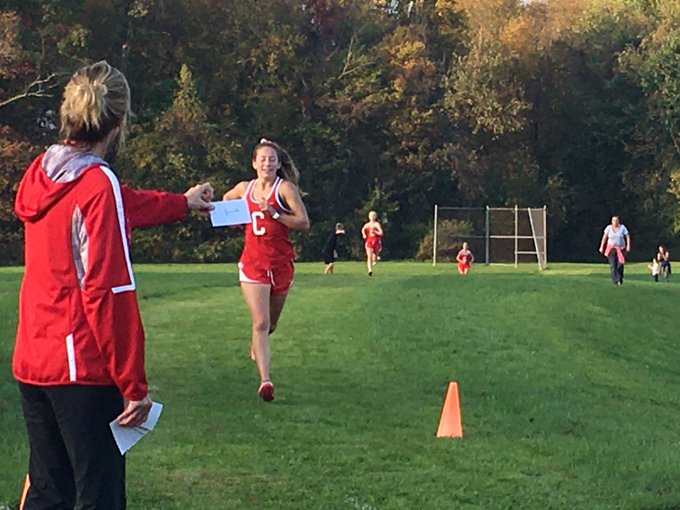 SUGARLOAF – The Crestwood girls assumed the Wyoming Valley Conference cross country lead while the boys knocked away one of the teams with which they were sharing the lead.

On the final full day of regular-season cluster meets in the WVC, both Crestwood teams posted sweeps of their three competitions, most importantly winning a head-to-head battle with Holy Redeemer.

The Holy Redeemer girls arrived at the Valley Elementary/Middle School course Oct. 13 with a chance to go home as conference champions.

Instead, Crestwood ended those hopes the way they have every other meet of the WVC girls season, taking the first three places to clinch the victory long before the sometimes tedious process of tallying up points.

Molly DeMarzo, Ella Novelli and Maggie Kozich finished within 17 seconds of each other and 50 seconds ahead of everyone else to clinch the wins.

They had help available if it was needed.

After Hazleton Area’s Jillian Wolk and Holy Redeemer’s Lexi Marcinkowski finished fourth and fifth, Crestwood made it five of the top seven runners in the six-team race with Ellie Kozich and Emily Leicht finishing next.

“In the regular season, you’re guaranteed the win if you get top three, but even our four and five, six-seven-eight, have been real close behind and have played a role in making it a lot more comfortable for us,” Crestwood coach Rob Moulton said.

The Crestwood boys were not quite as dominant, but grabbing 5 of the top 10 spots got them past everyone, including a 25-30 victory over Holy Redeemer, which had started the day in a three-way tie that included Lake-Lehman.

The Royals made the Comets work.

Tommy Brady from Holy Redeemer edged Nash Greene by three seconds to win in 17:07 and three other Royals finished in the top nine, but for purposes of their dual, Crestwood had the next three finishers.

Green was followed by Weston Medvetz in third and, after MMI Prep’s Woobie Kupsky took fourth, Jack Scanlan added a fifth-place finish for the Comets.

James Modrovsky and Ryan Kozich came in eighth and 10th for Crestwood.

Grant Smith and Donato Strish were seventh and ninth for Holy Redeemer.

Although the regular part of the schedule concluded, Crestwood’s title chases continue.

The Comets had one cluster meet – three opponents each – postponed. Those meets will be scored from the results of the Oct. 20 Ed Narkiewicz WVC Coaches Meet at the Wyoming County Fairgrounds.

If they beat Berwick, Columbia-Montour Vo-Tech and Northwest, the Comets will win the girls title and do no worse than sharing the boys championship.

Berwick presents the biggest challenge to Crestwood, which is 13-0 in girls and 12-1 in boys. The Bulldogs have an 11-2 boys record and 9-4 girls record.

Lake-Lehman and Dallas, which still have to be scored against each other, enter the final day with one boys loss each. The winner of that meet is likely to grab at least a share of first place, although Dallas also has to get past Holy Redeemer.

“It’s exciting because we’re one of several teams out there that have a chance to win it,” Moulton said of the combined regular-season and conference meet titles that will be at stake at the Wyoming County Fairgrounds. “Nothing’s guaranteed, so you’ve just got to go out, compete, do your best and see where you fall.”

The individual results, the team scores for all the meets decided on Hazleton Area’s home course Oct. 13 and the updated records for all the involved teams are below.