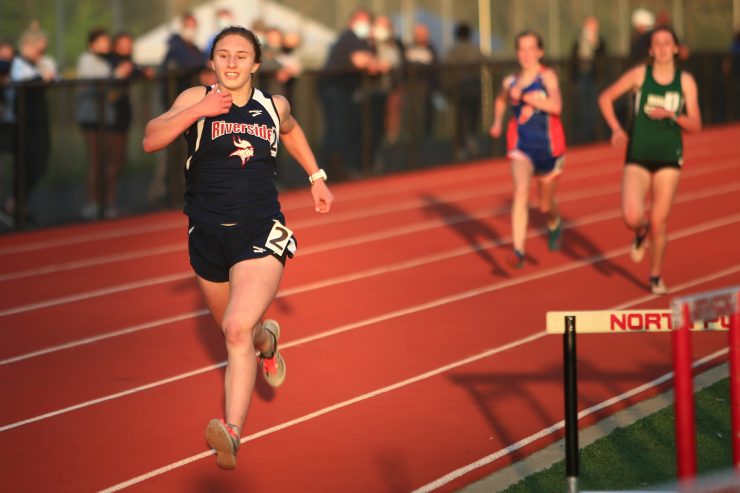 Lacey Danilovitz missed some meets this season and was limited to a single event in others as she hurried to the track, switching out of her Riverside softball uniform in time to compete in the 3200-meter run.

With a day to concentrate specifically on track and field May 17 at the District 2 Class 2A Championships, Danilovitz reminded of what she is capable of as a distance runner.

“I haven’t been able to really go 100 percent in track, so I honestly thought if I get a medal, I’ll be satisfied,” Danilovitz said after the win.

Danilovitz already had her medal, with a third-place finish behind Elk Lake’s Krista Jones, who won the two district Class 2A cross county titles before her, and Flynn in the 1600 run. The sophomore took it another step in the 3200 with a win and the state qualification that goes with it.

“I didn’t expect to win the race, but I think I’m very glad I could run with all these great runners,” she said. “They’re all fantastic runners and I’m really glad they were here to push me.”

Danilovitz was one of the big reasons Riverside, a team that finished fifth out of six in dual meet competition during the Lackawanna Track Conference Division 3 season, placed third out of 17 teams at the district championships.

Danilovitz is seeded 17th out of 23 state entries in the 3200, but with softball season over, she has a chance to continue concentrating on running going into Friday’s state Class 2A meet.

Her teammates are medal contenders, based on seeds.

The top eight in each event earn team points and state medals.

Perfilio is seeded eighth. Meredick is ninth in the 100 hurdles and 13th in the 300.