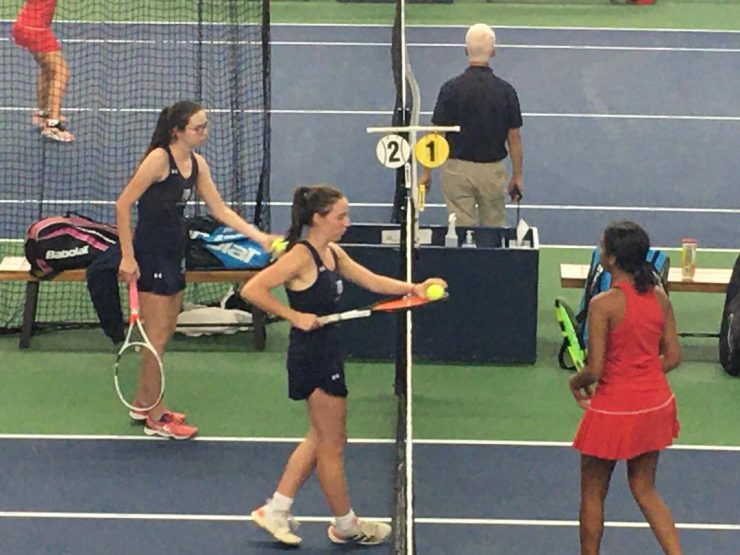 CLARKS SUMMIT – Dominica Delayo remembers dreading the thought when she cracked into the Wyoming Seminary girls tennis lineup as a number-one doubles team player as a freshman.

If team success ever came down to her match, “I thought I would crack under pressure,” Delayo said.

After four years, almost entirely as a first doubles player, the dominance of Delayo and her partners – and of the Wyoming Seminary team as a whole – meant she had never faced the situation.

When it finally became necessary Tuesday with a trip to Hershey for the remainder of the Pennsylvania Interscholastic Athletic Association state tournament on the line, the senior team of Delayo and Margaret Mihalick pulled through, securing a 3-2 victory over Moravian Academy in a Class 2A first-round match at the Birchwood Tennis & Fitness Center.

With all the players from both teams crowded, along with spectators, at the windows above Court 4, Delayo and Mihalick fought off several comeback attempts in a 6-2, 4-6, 6-4 victory over Yan Yu and Kanchan Gupta from the District 11 champions, who played in last year’s state team final.

“You look up and see this sea of people, I’ve never had all of the eyes on me before,” Delayo said.

Through a 46-0 career record in Wyoming Valley Conference matches, Delayo never even had to face a third set. The only times she had ever lost in high school were once each in the 2019 district team tournament as a sophomore and the 2020 doubles tournament semifinals as a junior.

“Especially when it comes down to your match and it’s third set, it’s definitely nerve-wracking,” Delayo said.

Still, Delayo summoned up the steady nerves needed to hit shots like the volley for a 30-love lead in the deciding game after Yu-Gupta had rallied in the second set, then cut a 4-0 deficit to 5-4 in the third.

“Not only did they execute, but they stayed composed,” Wyoming Seminary coach Raphael Cooper said. “They were composed and had poise.”

The first doubles team quickly became a force when Mihalick was placed with Delayo early in the season as the unbeaten team that is three wins away from a potential state title took shape with the addition of freshman Ilana Rosenthal and international student Victoria Martinez from Spain to the singles lineup.

Formerly a singles player, Mihalick adjusted to the new role.

“The adjustment was nothing I had to worry about at all,” Mihalick said. “Dominica and I have been playing together since our freshman year. We used to hit together singles-wise, just to get a different look.

“So, even though I was a little disappointed to have to give up my (singles) spot, I was excited to get to play with Dominica and I knew we would do great together.”

That showed in the district doubles tournament where they won three times and, as a fifth seed, advanced into the semifinals, which resume Wednesday at noon back at Birchwood.

First, however, their teammates were counting on the ability of Mihalick and Delayo to break the 2-2 team tie with Moravian Academy Tuesday and extend their season.

“I wasn’t really focused on it until I started hearing some cheers and then I looked up and saw every single one of my teammates up there, which meant that they finished the match and it was down to us,” Mihalick said. “Then, I was like, ‘wow, there’s a ton of people up there and this is a lot of pressure.’

“But, I’m happy that we pulled through. We’re really excited and this is the furthest that this graduating class has gone so far, so we’re just really happy to have made it through the first round.”

It does not get any easier for the Blue Knights, who already won WVC and District 2 Class 2A titles this season.

Wyoming Seminary and Knoch play Friday at 4 at the Hershey Indoor Racquet Club in the quarterfinals.

If the Blue Knights win, they continue the season into the final day of team competition Saturday with a noon semifinal and a possible 6 p.m. championship match.

The other four points were all decided in two sets, including Rosenthal’s quick blitz of Isabella Bartolacci, 6-0, 6-0, at first singles.

Rosenthal’s only loss of her freshman season came to 2019 state champion Karissa Ghigiarelli from Riverside in the district singles title match. Along with Ella Krypel, she is also in the district semifinals in doubles Wednesday.

“She keeps getting better and better,” Cooper said. “She’s a girl who dedicates herself real hard, even as a freshman, in the offseason, putting in extra time in tournaments.

“She loves it and that’s what it’s all about for her. She is getting better and she’s only going to get better.”

Then, Moravian Academy wrapped up the second doubles point, meaning the teams were tied again and shifting all emphasis to the first doubles match and the Mihalick-Delayo team.

In a lineup where four of their five teammate are underclassmen, the senior partners showed they were ready for the challenge.

CLASS 2A FIRST ROUND