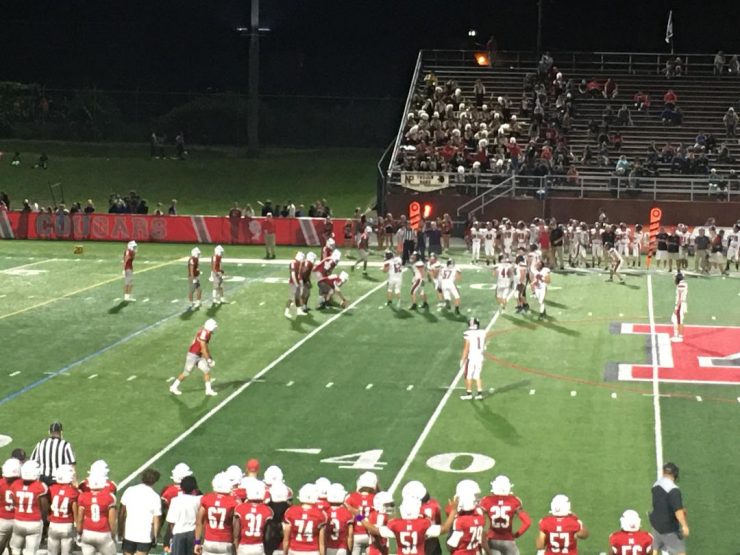 The Cougars duplicated that effort in the second half with a special-teams burst by Cusatis making sure the offense did not even have to get involved on one of the scores.

Hazleton Area’s first scoring flurry put it firmly in control of the non-league game. The second turned Friday night’s top matchup into a blowout as the Cougars ran over and ran away from visiting North Pocono, 54-7.

Cusatis came in motion, took a shovel pass from Tyler Wolfe, turned the corner and blazed a trail down the right side to the end zone 71 yards away for a 28-7 lead with 8:44 left in the half.

“My team made great blocks for me,” Cusatis said. “I just saw that hole, used my vision, got through there, took that crease and made that play.”

North Pocono used a pair of second-quarter interceptions by Riley Moore and Ryan Marsh to keep things from getting any further out of hand before halftime in the only Week Three meeting of 2-0 teams in District 2.

Then, Cusatis took off on a similar sprint, making his way to the right side on a punt return and racing down the right sideline 74 yards for the score that sent the game into the Mercy Rule at 48-7 with 8:32 left.

After his offensive and special teams contribution, Cusatis thought there were other parts of the team’s performance in the meeting of the top-three teams in the Gaughan Auto Store Super Six Power Rankings that were worthy of attention.

“I think it was our best defensive game,” he said. “I thought we played really good on defense, but have some stuff to clean up on offense.”

Three games into the season, Hazleton Area has been the district’s most dominant team, outscoring opponents, 146-29.

“We know not to be complacent,” said Cougars coach Dennis Buchman, Matthew’s older brother. “This is a tremendous group in terms of they accept the challenges and the task at hand. They understand that we have to continue to improve.”

That is a scary thought for future Hazleton Area opponents, but Buchman’s players echo the sentiment.

“I think this is the best we played so far, but we have a lot left in the tank,” Matyas said. “We have a lot to clean up – two turnovers in the first half. We left a lot of points on the board and we gave up points that we should not have.”

North Pocono’s first 8 possessions, totaled 69 yards and 3 first downs. All of the first downs and 51 of the yards came on one drive.

After the first nine plays produced a net of minus-1 yards with no play gaining more than a yard, the Trojans got the offense moving on their fourth possession, already trailing 15-0 less than nine minutes into the game.

Noah West ran for 10 yards and Hazleton Area was charged with a 15-yard personal foul penalty. West then hit Michael Blaine with a screen pass for 19 and Ty Lafave for the 22-yard touchdown to pull within, 15-7.

Faced with fourth-and-10, North Pocono cleared out for Lafave to head down the right hash where he cradled a pass that came in over his shoulder while he was going to the ground just across the goal line.

The Hazleton Area defense had created an early field position advantage, causing the Cougars to need to move just 23 yards for their first score, a 5-yard Connor Kundrat run.

The next drive covered 56 yards in 44 seconds with an 18-yard Buchman run, 19-yard Cusatis run and 19-yard touchdown from swing pass Wolfe on which Matyas broke a tackle at the line of scrimmage.

Hazleton Area quickly built its lead after the touchdown by Lafave, who was also in on nine tackles.

Buchman carried 4 times for 35 yards in the seven-play scoring drive that carried into the second quarter. Wolfe rolled right and hit Matyas for the 2-yard score.

The Cougars forced a punt and scored again on the next play when Cusatis took off with the shovel pass.

Hazleton Area received the second-half kickoff and put together its longest drive of the night, covering 57 yards and 14 plays in 6:50 by converting two third-down situations and two fourth downs.

The second seemed unlikely when Wolfe had to leave the game after his helmet came off.

Facing fourth-and-14 at the North Pocono 18, the Cougars went with a direct snap to Buchman and a run toward the left corner where he found nothing open.

Buchman quickly took an alternate route to the end zone.

“I ran and I saw, ‘uh-oh, there’s nothing open on this side, they’re all crashing’,” Buchman said. “I happened to look back and I could see Connor Shamany making an excellent block on the corner to kick the corner inside.

“It was fourth-and-14, so I knew I had to try for some kind of miracle. I ended up cutting it back and he gave me a phenomenal block.”

Cusatis caught a 30-yard pass on the next scoring drive. Buchman took a sweep for 12 yards to convert third-and-five, then Wolfe broke free from a sack on the next play to hit Matyas for the 15-yard touchdown.

Zach Hoover made seven tackles, including one for a loss, and assisted on another for North Pocono.