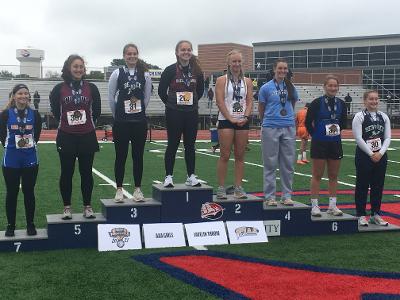 PHOTO: Hazleton Area’s Abbey Hengst (1) is at the top of the medal stand for the state javelin while Berwick’s Renny Murphy (3) and Allie Melchiorre (right) also receive their medals. (Tom Robinson Photo)

SHIPPENSBURG – The Wyoming Valley Conference’s top javelin throwers and high jumpers pushed each other to greater distances and heights throughout the year.

They pushed each other all the way to five Pennsylvania Interscholastic Athletic Association Class 3A Track and Field Championship medals when the season concluded May 29 at Shippensburg University.

Javelin competition was so stiff within District 2 that Hazleton Area junior Abbey Hengst won a state championship even though she did not win the district title this year.

Hengst, the 2019 District 2 champion, won her title this year on the state level while district champion Renny Murphy from Berwick earned her second state medal. Murphy placed third, adding to the seventh-place medal she won in 2019.

The top eight in each event receive state medals and earn points for their team.

All the District 2 medals came in those two events with Berwick athletes landing three of the five medals.

Murphy, Woodeschick and Melchiorre combined for 11 points, leading Berwick to tie for 20th in the team standings.

Central Bucks West beat out Hempfield, 53-31, for the team championship.

There were times when the District 2 javelin throwers and high jumpers seemed more like teammates than opponents.

“It’s nice to have someone here to talk to in between, to get pointers in between throws because they watch you and you watch them,” Murphy said.

Hengst said the three District 2 throwers root for each other even in regular-season dual meets and at districts.

Murphy and Hengst came in seeded 1-2 in the state for the best performances in any of the PIAA’s 12 district championships.

“My motivation coming here, I knew I was second seed, so I really wanted to get first,” Hengst said. “It was close; I knew I had great competitors around me, so my level of competitiveness definitely had to go up.”

Hengst said she concentrated on keeping the tip of her javelin down for better control in a tailwind and worked on increasing her running speed after being slowed by a leg injury during the season.

“Sometimes there would be wind, then sometimes none at all,” Hengst said. “A lot of it was about upper-body strength today.”

Two of Berwick’s three medals came from seniors, Murphy and Woodeschick, who had graduated the night before.

Woodeschick did that and kept going. She cleared both 5-2 and 5-3 on her third and final attempts.

“That was super nerve-wracking,” she said.

Like Hengst and Meclhiorre, both high jump medalists took advantage of making the state meet by meeting minimum standards, rather than winning a district title.

Others from District 2 just missed medals.

Alondra Church from Dallas lost out on a spot in the final, as well as clinching a medal, by the narrowest of margins. She came up one spot and one-hundredth of a second short when she finished ninth overall during qualifying heats.

Hazleton Area’s Isabella Colyer also settled for ninth, as part of a three-way for that spot after clearing 11 feet in the pole vault.

Wyoming Valley West’s Fatikha Tiktova, the District 2 champions in the high jump, was part of a 10-way tie for 10th at 5-0.

Both the pole vault and high jump were conducted indoors because of the weather conditions.

Delaware Valley’s Taliyah Booker, another district champion, had the lead late in the 400 before falling about 15 meters just short of the finish line.

Booker, who has battled leg problems this season, was struggling and her lead was dwindling when she tightened up and went down. She got up and limped to the finish line, last in her heat and 31st of 32 entries.

The Lackawanna Track Conference wound up without a medalist in Class 3A.