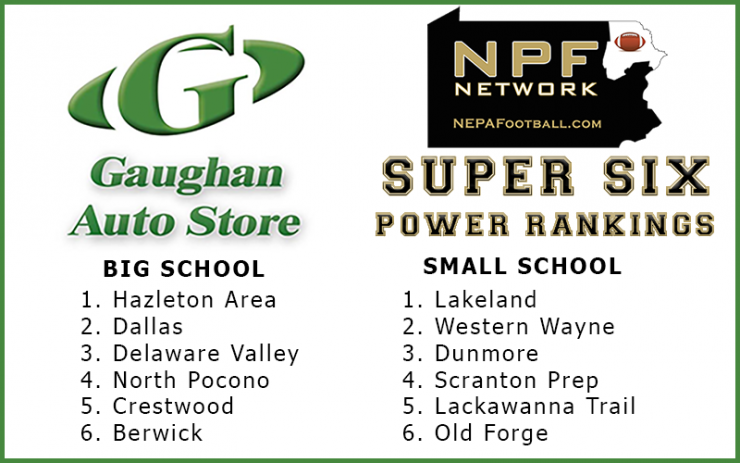 Lakeland, Dallas, Dunmore and Western Wayne all scored more than 40 points to make upward moves in the latest set of rankings.

Delaware Valley and North Pocono also climbed this week and Crestwood joined as a somewhat surprising start to the season shook up the rankings.

Lakeland is the new No. 1 Small School.

Lakeland, Western Wayne and Dunmore are followed by Scranton Prep, Lackawanna Trail and Old Forge in the Small School rankings.

Hazleton Area opened with a 47-15 win at Pittston Area and is set to head to Wallenpaupack Friday night for a meeting of 1-0 teams.

Dallas handled Abington Heights, 44-13, and is home for the second straight week.

Crestwood, which made it into the rankings in the No. 5 spot, is trying to follow up a 20-7 win over then third-ranked Valley View by going on the road to take down second-ranked Dallas.

Delaware Valley plays outside the area for the second straight week. After losing, 24-23, to potential Florida state contender Mosley, the Warriors are at Harrisburg, which is ranked second among the state’s Class 6A teams by PennLive.com.

North Pocono moved from fifth to fourth by beating Wyoming Valley West, 21-13, and is in this week’s other game matching ranked teams. The Trojans host No. 2 Small School Western Wayne.

Berwick slipped from second to sixth after losing to Southern Columbia, 42-27. Now, the Bulldogs head to Valley View, which fell out of the rankings this week.

Lakeland took over the No. 1 Small School spot with a decisive beating of the former No. 1, topping Scranton Prep, 41-14.

The Chiefs are home again Friday against Carbondale.

Dunmore replaced the former No. 3, Old Forge, by beating the Blue Devils on their home field, 43-36.

The Bucks are at traditional District 4 power Mount Carmel, the state’s fifth-ranked Class 2A team, Friday.

Scranton Prep drops to No. 4 heading into its game at West Scranton.

Lackawanna Trail held fifth with a 21-13 victory over Mid Valley. The Lions are at Lake-Lehman.

Old Forge drops to No. 6 going into a home game against Nanticoke.

The full rankings, with records and preseason rankings: