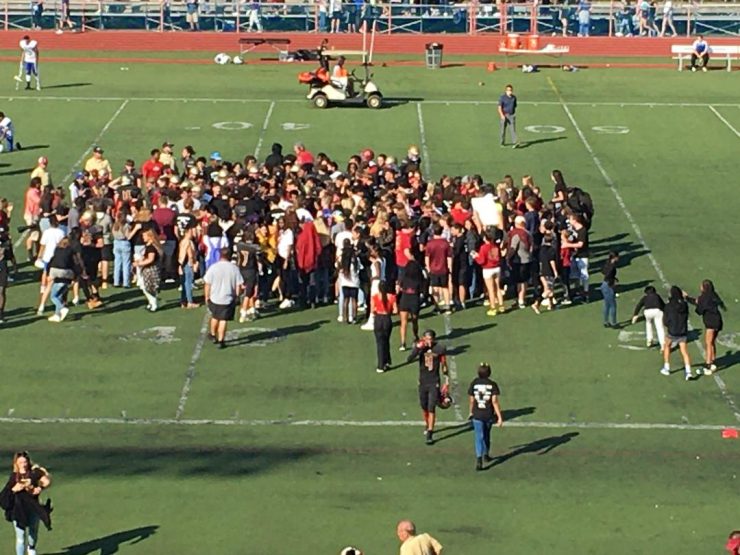 DUNMORE – The Scranton Knights were in a sharing mood Saturday, except when it came to The Bell.

With four players getting to double figures in carries and seven players catching passes, the Knights spread the wealth offensively on the way to retaining The Bell, the prize that goes with winning the Scranton School District rivalry game with West Scranton.

Arvel Chandler and Bashiyr Murphy scored two touchdowns each as Scranton held on to the bell by winning, 35-7, for its ninth victory in the last 11 meetings.

“We always want to spread the ball around on offense,” Knights coach Steve Shumbres said. “Our offense does a real good job of moving the guys up front. They show a ton of different looks at West Side and blitz a lot. Our offensive line did a good job of picking it up and giving those guys an opportunity to get the ball.”

Scranton dominated for three quarters to put the game into the Mercy Rule at 35-0 with 1:26 left in the third. Reserves then handled much of the fourth-quarter action.

Even with an errant punt snap statistically costing Scranton 25 yards, the Knights finished the first half with a 276-1 advantage in total offense and a 14-0 lead in first downs.

“We were a little disappointed in ourselves last week, giving up so many yards to Prep,” Shumbres said. “We really buckled down, went over what we wanted to do defensively and the kids bought in to the game plan. They understood what we were doing; understood what adjustments we were making; and they did a great job executing it.”

The Knights scored on their first four possessions for a 28-0 lead with 4:22 left in the first half.

Scranton went 32 yards following a short punt for the first score, then marched down the field for the others.

Chandler, the quarterback, found Charlie Thompson for nine yards on fourth-and-eight and ran 3 times for 21 yards on the first possession, which he capped with a 4-yard touchdown run.

The next drive covered 70 yards in 11 plays, ending with Charlie Thompson’s 1-yard touchdown and Chandler’s two-point run for a 15-0 lead in the last minute of the first quarter.

The first of two interceptions by sophomore Billy Maloney, on the last play of the first quarter, led to a 10-play, 71-yard scoring drive.

Chandler, who hit three passes for 39 yards in the first four plays of the drive, scored on a 2-yard run on fourth-and-goal. He finished 10-for-13 passing for 97 yards and carried 10 times for 58 yards.

“Arvel’s our leader offensively,” Shumbres said. “ … He wants to do whatever he can, whether it’s running or throwing. He’s unselfish. He’ll distribute the ball to whoever’s opening. He’s going to make the reads and make the right throws.”

Thompson’s 29-yard punt return set up the next touchdown, which came on a seven-play, 47-yard drive.

Murphy had a 13-yard run early in the drive and scored from the 2. He wound up as the game’s leading rusher with 121 yards on 13 carries.

Murphy’s first touchdown made it 28-0 at halftime. He scored again to complete an 80-yard, third-quarter drive, going over from the 1, one play after he had covered 35 yards and one official had signaled he was already in for the touchdown.

Joseph Harris scored on a 3-yard run on third-and-goal.

Harris led the Invaders offensively with 9 carries for 22 yards and a five-yard reception. He also led on defense with seven tackles, including two for losses, along with four assists and a fumble recovery.

Elijah Ortiz intercepted a pass and made a team-high four tackles for Scranton.