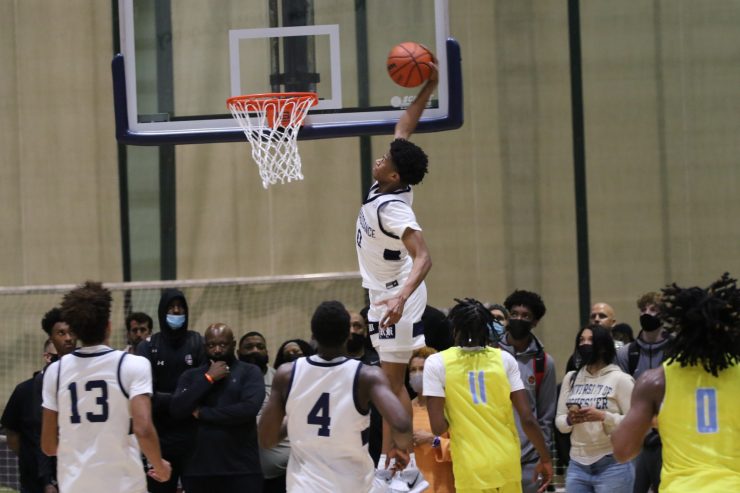 Cadie Lewis led a fast start and finished with 17 points as the NEPA Elite Sheehan 16U team closed out the event with a 49-25 victory over Syracuse United in a 10th/11th Grade Girls Division game.

The Sheehan team went 2-1 for the weekend.

Lewis had three of her four 3-pointers and 11 of her points during a 35-point first half by NEPA Elite.

Erin Van Ness, a Tunkhannock eighth-grader who is new to the team this weekend, added 11 points.

Lewis is from Dunmore and Glowack is from Crestwood.

NOTE: Return to https://nepasportsnation.com/nepa-elite/ Monday. We’ll have more coverage wrapping up the event.

The NEPA Elite Scoblick 15U girls team played once each day and wound up 2-0 on the weekend by a combined margin of 52 points in its Girls 9th/10th Grade Pool A games.

Playing at the same time at the Throop Civic Center, the NEPA Bulldogs-Piccolino felt to (New York) City Rocks-Stockwell, 59-56, in a Boys 9th Grade Division Pool A game.

In a boys game at Riverfront, the Riverside Hawks handled NEPA Elite Van Zelst 16U, 64-34.

The New York Rens completed a 4-0 run through the Platinum 17U Division with a hard-fought, 69-65 victory over Team Melo from Baltimore.

The Rens (Renaissance Hoops) feature three of the nation’s top 50 college prospects in the Class of 2022, according to ESPN, and one of them, 6-foot-10 forward Kyle Filipowski, was one of the weekend’s dominant figures.

The other two teamed on a play that helped put the game away.

Simeon Wilcher made a steal and fed Roddy Gayle for a powerful dunk and 65-58 lead with 1:11 remaining.

Tyler Betsey hit his first five 3-point attempts and the New York Rens (Renaissance Hoops) used a strong defensive effort to spoil the NEPA Elite Joyce 15U boys teams hopes of a perfect weekend by posting a 69-47 victory in each team’s finale.

The Rens had gone 0-2 in the Platinum 15U Division Saturday, but came back to win both games Sunday.

NEPA Elite used a comeback in the early morning game to get to 3-0 before coming up short against the Rens.

Betsey finished with 17 points and 6 rebounds, 5 of them offensive.

The Rens blocked 8 shots, including 3 in a row at one point in the second half, and forced 17 turnovers.

James Moore had game-highs of eight rebounds and four blocked shots to go along with six points.

The game got off to a fast start when Betsey fed Moore for a dunk just five seconds after the opening tap.

NEPA Elite immediately answered with a Chase Scanlan 3-pointer from the wing for one of just two leads it had in the game.

The other lead came at 13-11 when Mason Fedor blocked a shot, then ran the floor to score off an offensive rebound.

Ricky Vinansky hit two free throws with 4.9 seconds left to lift NEPA Elite to a 47-46 victory over New York Gauchos in a Platinum 15U Division game.

By completing a comeback from a 29-18 halftime deficit, NEPA Elite improved to 3-0 in the KYDA Invitational.

Vinansky, who started as a freshman for Mid Valley’s District 2 Class 4A finalist, also grabbed two defensive rebounds in the final minute to get the team extra chances after he had missed at the line with NEPA Elite down two with 56 seconds left.

Kellen Casey’s steal and two free throws tied the game, 45-45, with 26.7 seconds left before Ralsean Jones gave the Gauchos the lead with 17.9 left by making the front end of a one-and-one.

The NEPA Elite Coyle 17U boys are on the court now.

Return to this blog as the day progresses.

Additional information about the event can be found in various stories at https://nepasportsnation.com/nepa-elite/.

Full scores and schedules are available at https://basketball.exposureevents.com/162850/kyda-invitational/schedule.