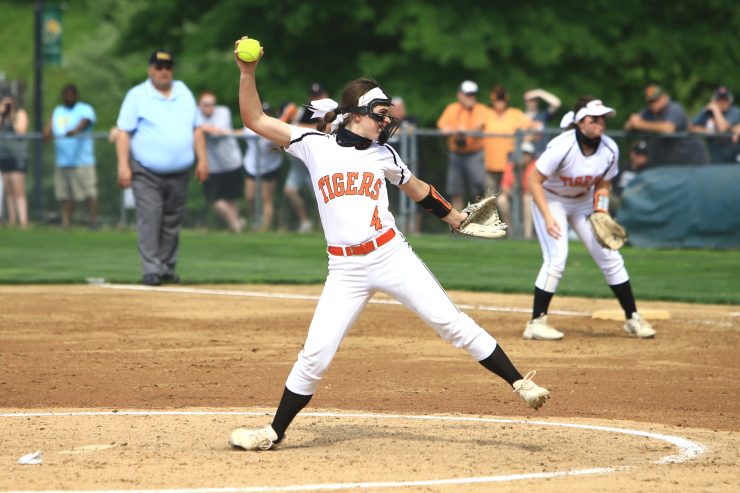 Hannon hit the first batter, but stranded two Archbishop Wood runners in the top of the first and Tunkhannock dominated from there.

The Lady Tigers scored four runs in the bottom of the first and three in the second.

Hannon allowed just one more baserunner until her no-hit bid was broken up with one out in the fifth inning.

Tunkhannock used the win to move within one game of its second straight state final appearance. The Lady Tigers (19-6) will face District 1 champion Villa Joseph Marie (19-3) Monday at 4 p.m. back at the same site, Patriots Park. Villa Joseph Marie defeated Bethlehem Catholic, 2-1, in another Thursday quarterfinal.

The Lady Tigers have won five playoff games by a total of 40-4 since going through some struggles late in the regular season, including splitting their last six games.

“Our defense has been pretty strong all year, we’ve just got to keep getting timely hitting,” Tunkhannock coach Bob Hegedty said. “We got some good timely hits today and, when you get deep into the playoffs, that’s what you’ve got to do.”

The Lady Tigers wound up with 13 hits, but they got started with help from losing pitcher Dakota Fanelli.

Tunkhannock’s first four batters reached in the bottom of the first, including three on walks. Wood drew a bases-loaded walk for the first run, Hannon drove in a run on a groundout and Huff singled through the right side for the 4-0 lead.

Emily Patton, who went 2-for-2 with a double and two runs scored, led off with the first of four second-inning singles.

Ella McNeff both drove in a run and scored one, then Wood drove in the last two of the inning for a 7-0 lead.

Paige Marabell was 2-for-2 with a walk, setting up courtesy runner Maci Iddings to score three times. She led off the fourth with a single up the middle and, after an Emily Schultz single, Hannon drove in the run.

The Lady Tigers got the 10th run needed to end the game during the bottom of the fifth.

Huff singled, but was erased on an Erin Van Ness fielder’s choice.

Although batting ninth, James is no stranger to providing hits to end games. She finished off Berwick with a grand slam earlier this season.

All nine starters in the Tunkhannock batting order had hits.

McNeff and Huff joined Patton and Marabell with two each.

Hannon struck out six and walked one.

“Sometimes, she gets a little overboard with it, but she knows how to dial it back and she’s working back to get where she needs to be.

“She’s been in spots like this all her life, so she knows what to do.”