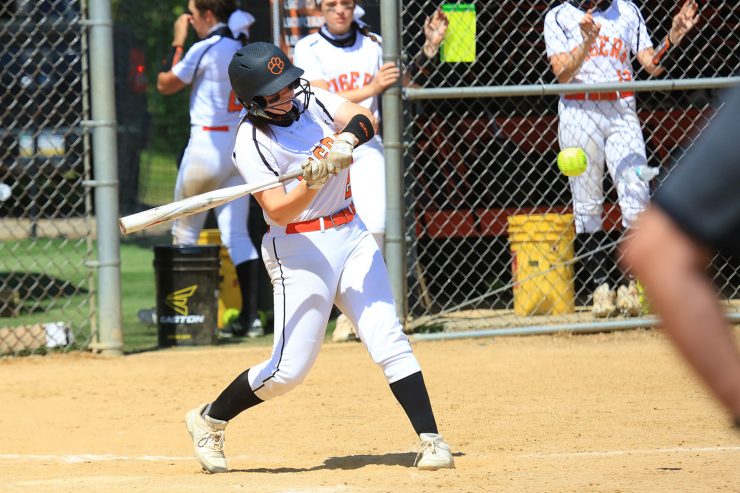 ALLENTOWN – Before ever leaving State College after playing in the 2021 Pennsylvania Interscholastic Athletic Association Class 4A state softball championship game and taking unbeaten Beaver Area to extra innings, Tunkhannock coach Bob Hegedty began making sure his young team understood there was no guarantee of making it back.

As Hegedty suggested, even with the bulk of the team returning, returning to the state final was not easy.

Or at least not until the Lady Tigers breezed through the quarterfinal and semifinal rounds of the state tournament with five-inning, shutout victories.

Erin Van Ness and Gabby Wood homered in the first two innings on their way to combining for six hits and seven RBI as Tunkhannock pummeled Villa Joseph Marie, 13-0, in Monday’s semifinal at Patriot Park.

The Lady Tigers made that last step in returning to Penn State’s Baird Field for Friday’s final look easy when Kaya Hannon took advantage of the strong start and threw a two-hit shutout to keep any thoughts of a comeback from ever materializing.

Tunkhannock scored seven times in the top of the first before Villa Joseph Marie recorded the first out of the game.

Wood singled in two runs and Hannon followed with an RBI double, but the crushing blow came when Van Ness launched a three-run homer to center field.

“When you come out and get seven runs like that in the first inning, it definitely takes a little pressure off our defense, off our pitcher and even off our coaching staff,” Hegedty said.

The Lady Tigers kept going with four more runs in the second on a two-run homer by Wood and a two-run double by Emily Patton.

“We really wanted to get back to Penn State,” Wood said. “We all really pushed for it.”

Tunkhannock scored two more runs in the third, threatening to end the game in three or four innings on the 15-run Mercy Rule. It eventually met the 10-run rule in the fifth inning when Hannon recorded the last of her eight straight outs to end the game.

Hannon struck out six and walked one in her second straight state tournament shutout.

Tunkhannock pounded out 13 hits, including three doubles and the two homers.

Van Ness was 3-for-3 with three RBI. Wood was 3-for-4 with four RBI. Each scored twice.

Ella McNeff and Emily Schultz each had two hits, scored twice and drove in a run. Schultz had a double.

Patton had a single, double and two RBI.

The Lady Tigers scored in double figures in consecutive games for just the second time in the entire season.

After closing out the regular season by splitting its last 6 games and giving up 24 runs in the process, Tunkhannock (20-6) has outscored six playoff opponents, 54-4.

That set up a Friday final against Clearfield, which handled Beaver Area its first loss in 43 games, 2-1, in Monday’s other semifinals.

Tunkhannock is back to trying to be crowned as the best Class 4A team in the state after finishing second in Division 1 of the Wyoming Valley Conference behind unbeaten Pittston Area, another state finalist.

“Nothing’s guaranteed and we told them that last year,” Hegedty said. “You take it when you can get it. We’re fortunate to get back to the final game.

“We want to get it. We want to finally get there and win it. We’ll do the best we can.”