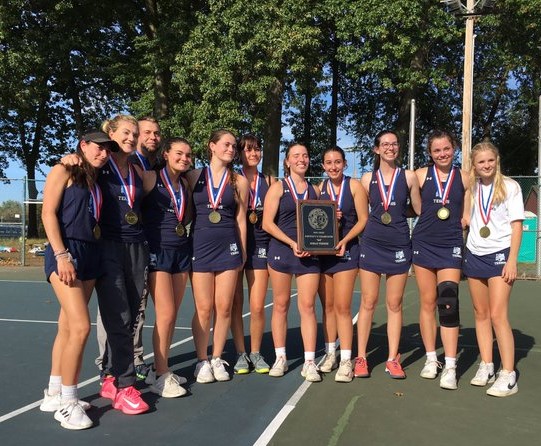 Third singles player Victoria Martinez was at the forefront of facing those challenges.

Martinez came through, joining the first doubles team of Margaret Mihalick and Dominica Delayo in winning in both matches as the Wyoming Valley Conference champion Blue Knights added the district title that eluded them a year ago.

Defending champion Scranton Prep presented a deeper, more balanced opponent in the final that Wyoming Seminary won, 3-0, but first the Blue Knights had to get past Riverside, the team that knocked them off a year ago in the same matchup.

The fourth-seeded Lady Vikes brought back the same singles lineup that had swept in a 3-2 semifinal upset of top-seeded Wyoming Seminary a year ago when Riverside entered that match as just the fifth seed. This time, it was the Blue Knights who produced the 3-2 win.

With 2019 state Class 2A singles champion Karissa Ghigiarelli and Madeline DeFaber-Schumacher, quite possibly the district’s second-best player, at the top of the lineup, the Lady Vikes were almost certain of two of the three points needed to repeat last season’s success.

Martinez, an international student from Spain less than two months into her time in the United States to study at Wyoming Seminary, is new to the concept of team tennis, but her teammates let her know the significance of her semifinal match.

“The first two singles is really hard with (Riverside) and the doubles, we knew we would do really well because we’re a good doubles team,” Martinez said. “So, it was like on me to do the best I could and keep this team going forward.”

“The power of Victoria, at three especially, you can’t match it,” Cooper said. “It was on display today.”

With the doubles teams, including the combination of Maria Nolte and Victoria Smulowitz, losing just one game each, it was up to Martinez to provide the deciding point.

“I can’t wrap my head around it,” she said. “This is really big. I always wanted an opportunity like this to have a team like I do right now.

“So, I’m really grateful and I want to put all my effort into the next match.”

Once in the final, Wyoming Seminary won all three matches that were completed and was ahead in the other two when play was halted with the outcome decided.

Second singles player Ella Krypel, who was in the first spot a year ago when the Blue Knights were upset in the semifinals, added the third point against Scranton Prep.

“I knew that a lot of our team is leaving this year so I want to leave on a good note,” Krypel said.

Krypel, Martinez and the senior doubles team of Mihalick-Delayo all opened the final with 6-0 wins in the first set. Martinez added another 6-0 in the second set while the others closed out their matches to send Wyoming Seminary into the Oct. 26 first round of the Pennsylvania Interscholastic Athletic Association state tournament. The Blue Knights will play District 11 champion Moravian Academy at an indoor site.

Scranton Prep defeated Dallas, 3-0, in a meeting of one-loss, second-place teams in the semifinals. Scranton Prep had lost only to District 2 Class 3A champion Abington Heights in Lackawanna League play while Dallas had not lost since the WVC season opener against Wyoming Seminary.