The veteran presence came in the form of Crestwood senior Molly DeMarzo, the 2018 and 2019 District 2 Class 3A champion, who was second in the girls race.

But even part of DeMarzo’s story was the help that came from her young teammates. The Lady Comets finished 2-3-4 with sophomore Molly Kozich and freshman Ella Novelli following DeMarzo to the finish.

The meet returned after a year off and went on as the season-opening event for the bulk of the Wyoming Valley Conference, about one-third of the Lackawanna League and a handful of teams from outside District 2 despite some late-week, weather-related adjustments.

When the day was over, a total of 200 varsity boys and 124 varsity girls had completed the race plus another 110 junior high girls and 107 junior high boys for a total of 541.

McCormack finished in 13:26, three seconds in front of Danilovitz.

Juniors and seniors occupied the next five spots.

Montrose sophomore Nathaniel Sinkovich was the other District 2 runner in the top 10, placing ninth.

Dunmore was the first District 2 team to get two runners to the finish line with freshman Tommy Clark taking 12th.

Mid Valley got its second runner, Michael Novak, across in 14th.

Berwick’s Mattock Shultz, who was 16th overall, was the third freshman to finish.

There were five freshmen among the top nine girls finishers, led by Korty’s 15:33 finish.

Scranton and Montrose joined Crestwood with some of the top team efforts.

Crestwood added Ellie Kozich, in 13th, and Emily Leicht, in 27th, to the three runners in the top four.

Dallas had 4 – Hedglin, Olivia Thomas, Julianna Sobocinski and Sarah Williams – in the top 30. 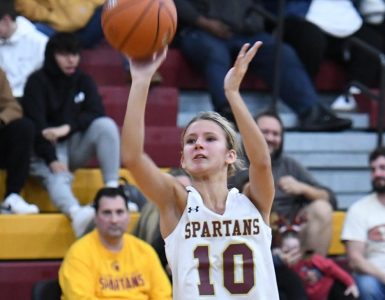