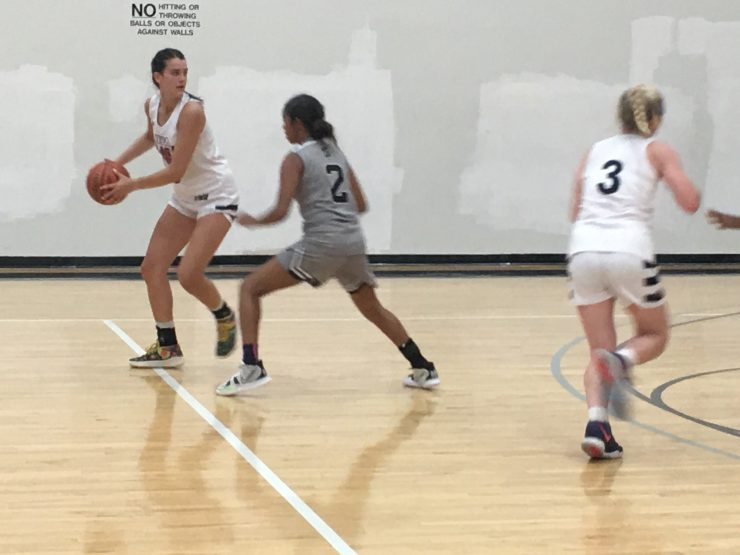 MANHEIM – The 17U and 16U girls teams from NEPA Elite had a perfect day Saturday when The Prime Event East, a Select Basketball Events tournament, opened at Spooky Nook Sports in Lancaster County.

The Clark 17U, Rini 17U and Sheehan 16U teams all went 2-0 to remain in title contention going into Sunday’s conclusion of the tournament.

But, it was not easy.

The six wins included four in which NEPA Elite teams faced double-figures deficits before coming back.

The Dunmore combination of Moriah Murray and Ciera Toomey led the Clark 17U team to comebacks in both games against high-powered competition.

The Rini 17U team also had its comeback led by a pair of high school teammates, Lake-Lehman’s Chase Purdy and Claire Dougherty.

Cadie Lewis and Lexi Corby were the driving forces behind the Sheehan 16U comeback.

“I don’t think any of us like to lose,” Murray said when Saturday’s action was over. “Just the thought of losing brings extra energy to us.”

Losing is something the group has not done often.

Half of the 10-player roster was part of the Clark 17U team winning the Hoop Group Showcase League title in 2020, the first season for the club out of Riverfront Sports in Scranton. The nine players in action this weekend – Kaci Kranson remains out with a wrist injury – went 5-0 last weekend to win the top division of the Hoop Group’s Pennsylvania Showcase at East Stroudsburg University.

A look at how each team got through Saturday’s two games:

Murray had a huge game in the 56-54 victory over Bay State Jaguars 2022 National Black and Toomey matched it in a 67-65 victory over the Fairfax Stars EYBL.

The Jaguars scored the first eight points of the second half for a 39-29 lead.

Then, Murray went to work.

In the final 14:23, Murray scored 15 points and assisted on 10 of the other 12 points, drawing the defense to set up teammates for two layups and two open 3-pointers.

The only two points Murray did not score or officially assist in the second half were when she set up another layup, leaving the Jaguars no option other than to foul Toomey, who converted both free throws.

“You just have time it at that point.”

Toomey had seven second-half points while Leila Hurley hit a 3-pointer and Anna Scoblick made the basket that capped a 12-0 run for the team’s first lead since the first half, 43-41, midway through the second.

The game was still tied again and had one more lead change when the Jaguars ended a stretch of 6:50 without a field goal during which the NEPA Elite defense had induced 13 straight misses.

Toomey made sure Bay State did not hit two shots in a row. She swatted a shot into the corner where Murray’s hustling save kept the ball alive and started the transition game.

Murray then hit consecutive 3-pointers to open the lead to 54-50.

She still was not done.

Murray raced back to break up a potential game-tying layup with a minute remaining, then hit both ends of a one-and-one with 14.4 seconds left to make it a two-possession game.

Toomey finished 5-for-7 from the floor for 11 points to go along with 3 blocked shots.

Two difficult stretches led to the Fairfax Stars putting NEPA Elite into a 54-42 hole with 9:02 left.

Fairfax grabbed 15 offensive rebounds in the first 11 minutes, once finally scoring on the sixth shot of a possession as it also overcame a 10-point deficit on the way to its big lead.

Then, the Stars went 11-for-15 to begin the second half as Kiki Rice, rated by ESPN as the number-one point guard in the country in the Class of 2022, began to take over the game.

“We started strong, but then we had a hard time finding a rhythm,” coach Kevin Clark said. “I think we took a step back defensively for a while, but I thought we responded well after a timeout.”

Rice had 12 points in a five-minute stretch early in the second half.

Then, it was time for Toomey to have her say in the outcome.

Toomey went 7-for-8 while scoring 15 of her 22 points in the final 12:32. That included a three-point play to stop the Fairfax onslaught and launch a 16-2 surge into the lead as well as the game-winning basket with 6.5 seconds left.

The 16-2 run culminated in a 15-footer by Kaeli Romanowski off a kick-out from Toomey for a 58-56 lead with 4:44 left. It was part of three lead changes and three ties in the final five minutes.

After Rice scored, but was unable to complete the three-point play, the game was tied at 65-65 with 56.8 seconds left.

Murray dribbled down most of the remaining time before Fairfax double-teamed her, touching off a chaotic sequence for Toomey’s winning basket.

Kylie Lavelle tipped a ball out of a crowd and Romanowski got to it on the left wing. She spotted Toomey just to the right of the basket and zipped a pass to her for the winning score.

“It was a miscommunication that kind of worked out,” Toomey said. “We were all yelling to Mo that she was going to get doubled. She thought she heard ‘under the basket’, so she tossed it up there.

“Kylie hit it to Kaeli and I noticed that there was a girl kind of too far from me, so I put my hand up and (Kaeli) got it there.”

On what had been a hectic play, Romanowski was able to spot Toomey and get her the ball in position for an easy basket.

“It was definitely a moment that if one thing went wrong, it could have totally turned out a different way, but I made eye contact with her and I knew it was coming my way.”

Fairfax hurried up court and had a look at the potential winning 3-pointer, but it was short, hitting the rim as time expired.

Toomey finished with 8 rebounds and 7 blocked shots to go along with her 22 points. Five of the blocks came in the first half and seven of the rebounds came in the second.

Romanowski also had a 3-pointer with 1:05 left to erase the final deficit. She scored seven of her points in the second half and also had thee assists and two steals.

Hurley and Smelas are from Jim Thorpe while Scoblick is from Abington Heights, Lavelle from Riverside and Romanowski from Western Wayne.

The comeback win came against New Jersey, which opened a bigger lead in the first half and was still in front 32-22 when Kallie Booth got an 18-2 run started.

Booth assisted a Dougherty basket then scored on a drive.

After the Sparks scored, Booth hit a 3-pointer to start of stretch of 14 in a row that included three inside baskets by Purdy.

From the start of the 18-2 run, NEPA Elite wound up outscoring New Jersey 30-7 for the rest of the game, picking apart the Sparks on the inside.

“The big thing is we weren’t dribbling without a purpose,” coach Jess Rini said of the team’s ability to work for several open shots under the basket. “We were playing patient, playing together and getting the looks that we wanted.”

Dougherty had nine points and three offensive rebounds during that time. Purdy added eight points and Booth had six.

“Kallie came up big for us,” Rini said. “I thought she stepped up and handled their pressure really well.”

Mia Blume had a 3-pointer while Nadia Evanosky and Katherine Shepherd also added baskets in the big finish.

It began taking control early in the second half while combining Dougherty with four guards.

The lead reached 10 midway through the half, then Shepherd and Evanosky hit back-to-back 3-pointers to make it 61-44.

After Team Final tried to answer with a four-point play, a five-point possession put the game away with five minutes left.

Purdy scored and was fouled. She was unable to complete the three-point play, but NEPA Elite controlled the rebound, leading to Booth’s three-point play and a 66-48 lead.

Booth is from Pittston Area, Blume from Dunmore, Evanosky from Dallas and Shepherd from Western Wayne.

The Sheehan 16U team won its pool before proceeding into brackets.

NEPA Elite took the four-team Pool A with a 2-0 record. That set up a Gold Championship bracket quarterfinal game Sunday morning at 9:05 game against XGen.

Saturday’s action included a pair of four-point wins, 39-35 over K-Low Elite and the come-from-behind victory, 45-41, over Fairfax Stars Showcase.

Molly Murphy hit four 3-pointers while leading the way with 16 points against K-Low.

Corby added nine points and seven rebounds. Lewis went 5-for-6 from the line while scoring seven.

Lewis made four 3-pointers against Fairfax to finish with a team-high 12 points, along with 6 rebounds.

Corby had 10 points, 8 rebounds, 5 steals and 3 assists while creating a spark with several key hustle plays.

“She’s definitely the toughest girl on our team,” coach Emily Sheehan said. “Every loose ball, she’s on it. Every rebound, offense or defense, she gets after it.

“It’s in her hands all the time. She doesn’t let a lot of people get on it or get a jump ball. She rips it out every time. She really makes sure we get possessions and that toughness helps us as a team.”

Fairfax scored the last eight points of the half for a 25-12 lead, but NEPA Elite began the second with seven straight points.

Lewis opened the half with a 3-pointer and Corby followed with a spin move for an inside basket and Murphy hit two free throws.

Isabella Rebar hit two 3-pointers midway through the half to keep NEPA Elite within striking distance.

One of Corby’s extra-effort plays set up another 3-pointer, this one by Lewis to make it 38-37.

Fairfax answered with its last basket with 2:58 left, then NEPA Elite scored eight straight before a harmless late free throw by the Stars.

Lewis tied the game on a 3-pointer and Corby broke the tie with another with 1:18 left.

NEPA Elite went 8-for-15 from long distance in the second half after a 1-for-9 first half.

Murphy, who made all four of her second-half free throws, hit both ends of a one-and-one with 17.6 left.

The 2-0 start to the weekend continues recent progress for the team.

“Even though we got off to a rough start, you win or lose as a team,” Sheehan said. “I think we’ve built our confidence together.

“We’re definitely playing better as a team, but also every game it seems like they are getting better individually.”

Murphy and Rebar are from Valley View, Corby and Williams are from Tunkhannock, Lewis is from Dunmore and Glowacki is from Crestwood.