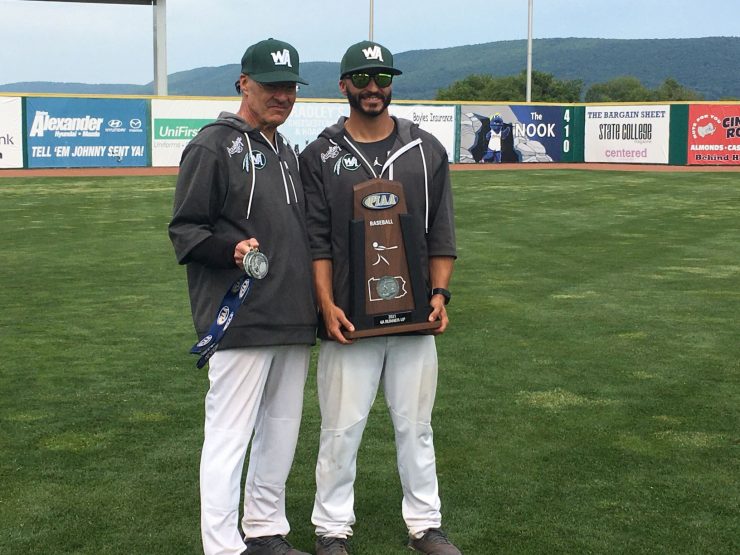 UPDATED: New Castle rallies past Wyoming Area, 7-3, for 4A title

UNIVERSITY PARK – Wyoming Area struck first with three runs on four hits in the top of the third inning Friday.

Rocco Bernadina, with a little late help from Anthony Miller, made sure the Warriors had just one hit the rest of the game, paving the way for New Castle to rally for a 7-3 victory in the Pennsylvania Interscholastic Athletic Association Class 4A state baseball championship game.

Bernadina and Miller combined on a five-hitter with 12 strikeouts at Penn State’s Medlar Field at Lubrano Park. They struck out the last five Warriors, three of them looking.

Wyoming Area still led 3-2 after 4½ innings before New Castle scored two runs in the fifth and three in the sixth.

Bernadina, who is committed to play National Collegiate Athletic Association Division I baseball at Kent State University, also provided the game-winning hit with a two-run double.

Miller, coming off a 12-strikeout, four-hitter in the state semifinal, came in with one out in the seventh. The Notre Dame-commit got the last two strikeouts.

The Red Hurricanes also took advantage of two errors and a passed ball by the Warriors to score four unearned runs.

They started their comeback with a squeeze bunts to bring in one run each in the bottoms of the third and fourth innings.

Hunter Lawall had two hits, including an RBI single, to lead the Wyoming Area offense. Jake Kelleher drove in another run with a sacrifice fly and a third scored on an error.

Evan Melberger and Casey Noone, the top two hitters in the Wyoming Area batting order, started the third inning with singles and came in to score.

Wyoming Area had an eight-game winning streak broken and finished 14-7.

Coach Rob Lemoncelli called his Warriors “the best baseball team to ever play at Wyoming Area,” and they had the accomplishments to back that statement. The Warriors won five games that had never been won before in a school history that dates back to 1965 – a district semifinal, a district final and three rounds of their first venture into the state playoffs.

“No moment was too big for those kids and I couldn’t be more proud of them, regardless of win or loss today,” Lemoncelli said. “I’m proud to be the coach at Wyoming Area.”