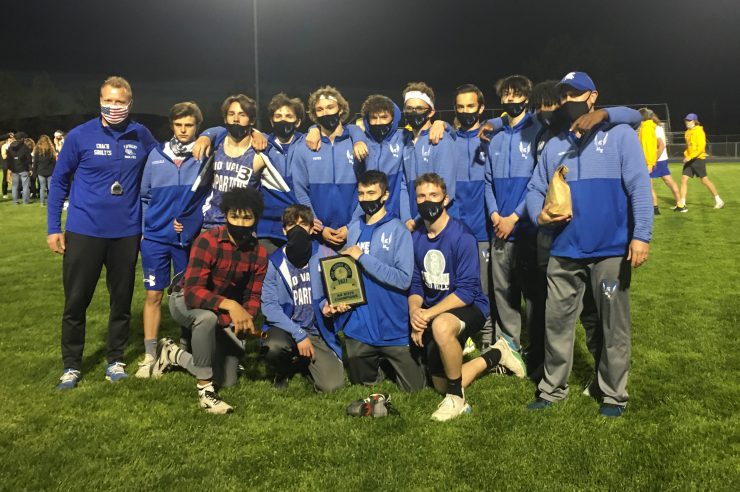 The Spartans won the final four of the meet’s six events to run away with the Class 2A boys title, 54-35, over second-place Holy Cross.

Zachary Popko ran on three of the winning relay teams, including leadoff legs on the 1200-meter sprint medley and the closing 4×400 relay.

“Zach Popko did a phenomenal job,” Spartans coach Nick Kazinetz said. “He ran two 4(00)s and an 800 tonight and we won gold in in all of them.

“He’s just a kid who’s been really quiet and has done everything we’ve asked of him.”

Darnell Calloway, Jeremiah Wolo, Kyle Marcinkevich, Michael Bennici and Collin Pacyna all were part of two of the wins.

Those four wins combined with second- and third-place finishes in the other two events to help Mid Valley score 54 of the possible 60 points, the most in any of the four divisions.

The Jordan Relays win follows up a Lackawanna Track Conference Division 3 title that was the result of beating Lakeland head-to-head, ending years of chasing the Chiefs by handling them their first conference loss since 2012.

“This year’s good,” said Kazinetz, whose team had to wait one more year for their potential breakthrough after the 2020 season was canceled because of the coronavirus pandemic. “I think last year would have been a real good year, too.

The Jordan Relays title was the first outright for Mid Valley after sharing the 2019 Class 2A championship with Montrose.

“We just really wanted to go out tonight and bring it home for the seniors because they’ve been invested in the program since they were in seventh grade,” Kazinetz said.

Collin Pacyna added a second-place finish in the distance medley to his two wins. The others on that relay – Gabriel Pacyna, Vincent Iacavazzi and Christian Snee – had each been on one winning team.

Holy Cross won the opening distance medley. Thomas Lee took care of the 800 leg, putting the Crusaders in first. Doug Walsh and Connor Tone each ran the 400 legs that followed before Kevin Jumper handled the closing 1600 leg, taking a six-second leg and expanding it to 17 for a finish of 8:27.55.

Holy Cross beat out Dunmore (33) and Lakeland (32) for second place. Scranton Prep was fifth with 28, followed by Western Wayne with 13 ad Susquehanna 12. Riverside, Elk Lake and Lackawanna Trail tied for the last spot with nine points.

Lakeland edged Dunmore by 12-hundredths of a second in the 4×100 relay. Mike Pidgeon, Dominic Spataro, Nick Mancuso and Jon Seamans finished in 44.76.