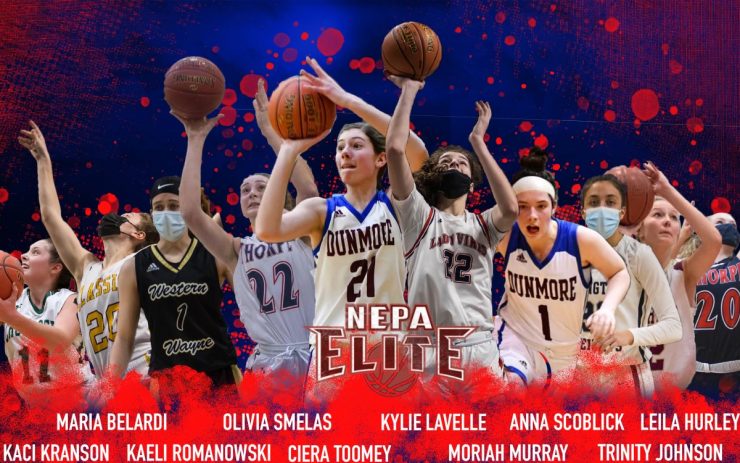 Rosters set for 17U girls teams

The NEPA Elite Clark 17U girls team won the prestigious Hoop Group Showcase League title in its first year and brings back five of the players who were part of that championship run as it prepares to enter into the AAU club’s second season of competition.

The teams, playing out of Riverfront Sports in Scranton, will once again feature many of the most decorated and sought-after players in District 2 of the Pennsylvania Interscholastic Athletic Association, which covers the northeast part of the state.

NEPA Elite will have two 17U girls teams this season, one coached by Clark and the other by Jessica Rini, a former assistant at nearby Misericordia University and current assistant at Dickinson College in Carlisle.

Both teams open their seasons Friday through Sunday by playing five games each in the Select Events Live at the Nook at Spooky Nook Sports in Manheim Township, Lancaster County.

Dunmore’s Moriah Murray and Ciera Toomey, Scranton Prep’s Maria Belardi and Western Wayne’s Kaeli Romanowski all return after spending the entire 2020 AAU season with the Clark team. Each is coming off a high school in season in which it helped its team to Lackawanna League divisional titles.

NEPA Elite opened the 2020 AAU season with two teams on the 17U level and expanded to a third for the second half of the season.

Trinity Johnson from Wyoming Valley West and Anna Scoblick from Abington Heights move onto the Clark roster after playing on other 17U teams, as does Kaci Kranson from Holy Cross, the program’s other midseason addition a year ago.

The rest of the Clark roster extends beyond District 2 with the addition of Leila Hurley and Olivia Smelas from Jim Thorpe in Carbon County, which is part of PIAA District 11.

The NEPA Elite Rini 17U team features three players who were on 17U teams in the program a year ago – Lake-Lehman’s Claire Dougherty, Dunmore’s Mia Blume and Scranton Prep’s Avery McNulty.

Three more – Katherine Shepherd from Western Wayne, Nadia Evanosky from Dallas and Kallie Booth from Pittston Area – move up after playing on the NEPA Elite 16U team.

The rest of the roster includes Chloe Lyle and Rowan Murray from Honesdale, Megan Desmet from Wallenpaupack and Chase Purdy from Lake-Lehman.

The players that make up the NEPA Elite 17U rosters have enjoyed personal and team success in their high school careers.

Moriah Murray and Lavelle, future National Collegiate Athletic Association Division I teammates at Drexel University, were both first-team Pennsylvania Class 3A all-state players as sophomores. Murray was also recognized as a freshman.

Toomey was a third-team, all-state selection as a freshman. The only sophomore on the Clark team roster, Toomey already has 11 Division I offers.

Belardi started on the Scranton Prep team that followed up its Lackawanna League Division 1 title by winning the District 2 championship and advancing to the state semifinals in Class 4A.

Romanowski led Western Wayne to an appearance in the District 2 Class 3A championship game, which was won by Lavelle’s Riverside team. Romanowski was NEPABasketball.com’s Lackawanna Division 2 Player of the Year in each of the past two seasons.

Moriah Murray and Lavelle have been the website’s Lackawanna Division 3 Players of the Year the last two seasons.

All of the players on the roster have received various all-star recognition in their high school careers.

Moriah Murray, Toomey and Kranson were all first-team selections in Division 3.

Belardi was a second-teamer in Lackawanna Division 1.

Scoblick, a second-team Lackawanna Division 1 all-star, and Kranson were prominent in District 2 Class 5A and 2A championships by Abington Heights and Holy Cross this season.

Moriah Murray, Lavelle, Romanowski, Kranson and Hurley are all 1,000-point career scorers in high school with another season to go.

Dougherty was named Wyoming Valley Conference Division 2 Most Valuable Player and Purdy was a first-team all-star for their roles in Lake-Lehman’s division title.

McNulty was the first forward off the bench for Scranton Prep’s state semifinalists.

Booth, the only sophomore on the Rini team roster, was a second-team WVC Division 1 all-star.