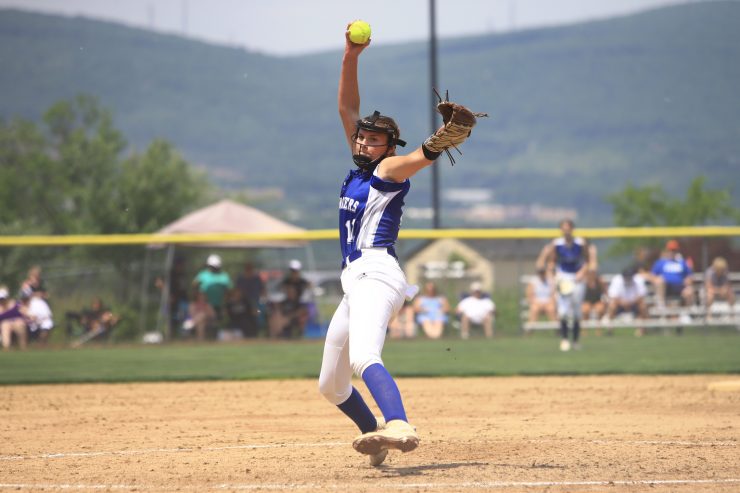 Butka homered twice and drove in four runs while tossing a four-inning perfect game in which she struck out six as the Lady Invaders defeated Scranton, 15-0, in a Lackawanna League Division 1 game.

Runco homered, drove in three runs and struck out 10 in a three-hit shutout as Mid Valley defeated Old Forge, 10-0, in five innings in Lackawanna Division 3.

West Scranton scored four runs in the first, six in the second, and three in the third, then ended the game on the Mercy Rule by scoring twice before an out was recorded in the bottom of the fourth.

Butka was 2-for-2 with a walk, and a hit by pitch. She scored three times.

Gianna Russo, another with two hits, scored three times and drove in the game-ending run.

Runco was 2-for-2 and also scored three times.

Krista Cortazar went 3-for-3 with a double and two RBI.

The game was one of three shutouts in Lackawanna Division 3 openers.

Makenna Balay also had three hits, including a double, and drove in two runs in the Hazleton Area win.

Berwick’s Gianna Berlin went 3-for-3 with a homer and three RBI.

Sophomore Gianna Adams struck out 16 in a one-hitter as Pittston Area shut out Wyoming Valley West, 9-0, in another WVC Division 1 game.

Sage Weidlich went 3-for-4 with two RBI to led the 15-hit attack.

Kallie Booth had a double, triple and two runs scored.

Stalica drove in five runs and Heard drove in four.

Garrett Pietryka singled in the game-winning run with two out in the top of the seventh inning and Matt Show followed with a two-run double to complete an Abington Heights rally that produced an 11-8 victory over Delaware Valley in a Lackawanna League 1-2 baseball crossover.

Show finished 4-for-5 with a stolen base, a run and three RBI.

Delaware Valley took leads of 5-0 after one inning and 7-1 after three.

Abington Heights closed the gap to a run with five runs in the top of the fifth, but still did not lead until the seventh inning.

Conner Griffin had a single, double and two RBI.

Griffin led off the seventh with his double and scored the tying run on a Jacob Fink sacrifice fly.

Charlie Hamm did not allow an earned run in 3 2/3 innings of relief to pick up the win.

The Warriors took an 8-7 lead into the final inning.

C.J. Ross had two hits while Corey May and Derek Metzger drove in two runs each for Delaware Valley.

Crestwood broke away from a halftime tie to defeat visiting Dallas, 12-6, in a Wyoming Valley Conference night game.

Delaware Valley routed Holy Redeemer, 18-3, by building leads of 11-0 after one quarter and 16-0 at halftime.

Peyton LoRocco, who had an assist, and Brady Quinn added four goals each.

Wyoming Area and Crestwood used the same formula to post 3-2 victories in the WVC.

Both teams lost at the first two singles spots, but won No. 3 singles and swept doubles.

Wyoming Area’s Nick Cirelli-Eli Harding won the second set at No. 2 doubles in a tiebreaker.

Crestwood’s second doubles win was much different, a 6-0, 6-0 victory by Braiden Fallbright-Mike Modrovsky.

Wyoming Seminary lost just 3 games in 10 sets during a 5-0 victory over Hazleton Area.