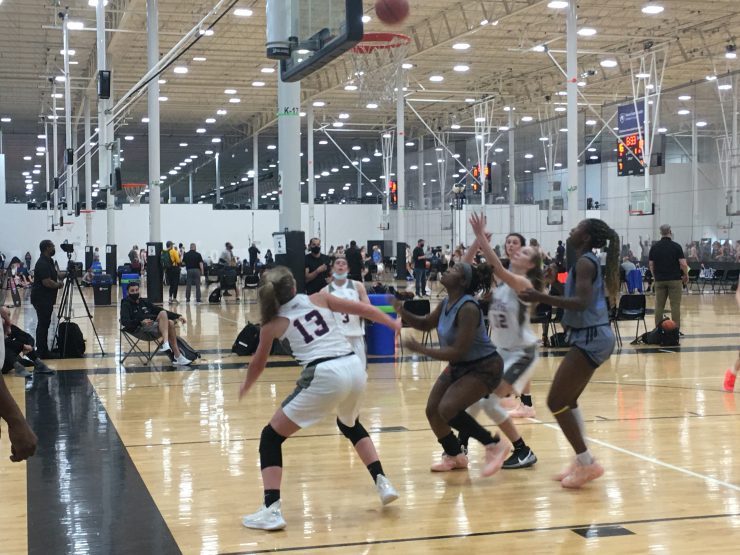 MANHEIM – The offense had stretches when it was apparent that Friday was Opening Day.

The 2020 Hoop Group Showcase League champion Clark NEPA Elite 17U girls team, however, flexed its muscles in other areas while opening the 2021 AAU season with a pair of victories in the Select Events Basketball’s Live! at the Nook.

The Clark team used rebounding in the opener and defense in the second game to pave the way to a 2-0 start in the 2022 Division Pool C.

With the Clark team going 2-0, the five NEPA Elite teams combined to go 5-4 in the first day of the three-day event. All five teams are scheduled for five pool play games before the weekend is over. The program went 3-0 on the 17U level with the NEPA Elite Rini 17U team winning big in its only game.

A recap of the first day:

Playing on her 17th birthday, Kylie Lavelle led the team in scoring in the opener and rebounds for the day.

Lavelle, a junior from Riverside who is already verbally committed to a National Collegiate Athletic Association Division I scholarship from Drexel, scored 13 points and shared the team lead of 7 rebounds during a 64-43 victory over Bria Holmes Elite.

Ciera Toomey scored 16 points and Lavelle had team-highs of 10 rebounds and 3 steals in a 42-33 victory over City Rocks from New York.

“Two very physical games today,” said Lavelle, who made all three of her 3-point attempts in the opener. “I feel like rebounding was the most important part of the games today and getting us out in transition.”

NEPA Elite overcame a 1-for-20 shooting effort from 3-point range in the second game and struggled at times against full-court pressure, but it showed off plenty of options in the first game.

Smelas, from Jim Thorpe, made all five shots in her debut with the team.

Despite being the shortest player on the floor, Romanowski shared the rebound lead with Lavelle by grabbing seven.

NEPA Elite finished the game with 19 offensive rebounds, including four each by Lavelle and Romanowski.

NEPA trailed at times before reaching the first half with a 25-24 lead.

Lavelle hit two 3-pointers and Toomey one in the first 3:43 of the second half as NEPA Elite sprinted to a 38-27 lead.

Toomey, the team’s only sophomore, made her final five shots while scoring 10 of her 16 points in the second half of the win over City Rocks.

NEPA Elite held City Rocks to two points over the final 12:15 of the first half to turn a 7-4 deficit into a 21-9 halftime lead.

Murray, who showed off her passing skills while finishing with seven assists, found Toomey, her Dunmore teammate, for the first two baskets of the second half, completing a 21-2 run to a 16-point lead.

“Getting used to playing with all the girls, I think our passing is going to be really important to build up team chemistry,” Murray said. “Some of us haven’t played with each other last year, so we all kind of want to get the feel for each other.”

City Rocks used its press to get as close as six before NEPA Elite secured the win.

“The press gave us a problem,” said Carrie Toomey, who is serving as head coach of the team for the first weekend in Kevin Clark’s absence.

Lavelle had seven points and two blocked shots to go along with her rebounds and steals.

Murray, who has committed to join Lavelle at Drexel, added five points and two steals to her seven assists.

Smelas and Anna Scoblick each had two steals in the first half when the defense produced nine. NEPA Elite wound up with 14 steals, 9 blocked shots and 26 defensive rebounds.

“The one thing I do think we really need to work on is moving away from the ball,” coach Toomey said. “I feel like we were standing around a little bit. We ran some things that forced them to have to do that and we got some easy baskets out of it.

“ … What we need to get better at is reading the defense and knowing what our other player will do because they’re all kind of getting to know each other.”

Belardi is from Scranton Prep, Romanowski from Western Wayne, Johnson from Wyoming Valley West and Scoblick from Abington Heights.

Defense paved the way for the Rini team to win its only game of the day, 52-16, over CJ Hawks-Lightning-Stanziano in the 2022 Division Pool N.

Of the 72 games played in the 2022 Division, the 16 points allowed by NEPA Elite was the second-fewest.

Nadia Evanosky from Dallas had six of the team’s 18 steals.

Mia Blume went 4-for-5 while scoring a team-high 12 points. Kathy Shepherd was 3-for-4 on 3-pointers while adding nine points.

Chloe Lyle grabbed 7 rebounds and Kallie Booth had 3 assists to lead the team in those categories.

Rowan Murray and Avery McNulty each had three steals.

Lyle and Murray are from Honesdale, Blume from Dunmore, Booth from Pittston Area and McNulty from Scranton Prep.

Sophia Talutto from Dunmore scored 12 points to lead the team to a 44-29 win over United NJ Platinum in its opener.

NEPA Elite got off to a slow start against Lady Raiders, getting five shots blocked while going 1-for-13.

Emily Romanowski made two free throws, Talutto cut through the lane for a basket and Kennedy Bittenbender made a 3-pointer in a seven-point streak to get within, 14-11, with 4:05 left in the half, but the Lady Raiders pulled away from there.

Bittenbender had a team-high eight points.

Romanowski is from Western Wayne and Bittenbender is from Scranton.

Viglone’s 3-pointer with about four seconds left forced overtime, but NEPA Elite managed just one point in the extra session and lost, 39-38, to Blackhawk Academy 2024.

Viglone is from Dallas and Marsola is from Wyoming Valley West.

MORE TO COME: Return to https://nepasportsnation.com/nepa-elite/ throughout the weekend for more coverage of NEPA Elite teams in events in Manheim (girls) and Pittsburgh (boys).