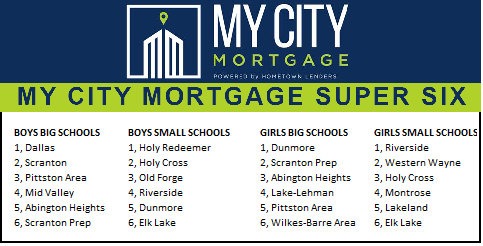 The Holy Redeemer boys and Dunmore girls finished up the season where they started and where they were for all 12 updates in between.

The Royals and Lady Bucks remained in No. 1 sports in the final My City Mortgage Super Six Power Rankings of District 2 teams that were released Sunday afternoon on our partner website, NEPABasketball.com.

The Dallas boys and Riverside girls joined them as the other top-ranked teams.

Dallas wound up first in Big Schools and Holy Redeemer first in Small Schools as two of the boys teams that made it to the Pennsylvania Interscholastic Athletic Association state semifinals before being eliminated this weekend.

Old Forge, ranked third among Small Schools, was the other team to make the semifinals.

Dunmore, in Big Schools, and Riverside, in Small Schools, were the two girls teams still playing this week before having their seasons end in the state quarterfinals.

The only changes in the final rankings, from those last posted at the completion of the District 2 finals, come in Big School boys.

Scranton Prep, which continued a strong finish by reaching the second round of the state tournament in Class 4A, rejoined the rankings in sixth. The Cavaliers tied for second in Lackawanna League Division 1, finished third in District 2 Class 4A, opened the state tournament with a road win, then were tied with state finalist Neumann-Goretti in the fourth quarter before falling, 57-51.

Abington Heights moved up from sixth to fifth while North Pocono dropped out of the rankings after losing its second straight, in the opening round of the state Class 5A tournament.

The top four in Big School boys remained the same.

Holy Redeemer held its top Small School boys ranking with an unbeaten WVC Division 2 season and a District 2 Class 3A title before winning three state games to reach the semifinal for the first time in school history.

The Dunmore girls lost just once in Pennsylvania, 40-39, to Jim Thorpe in the state quarterfinals to hold the top ranking. The Lady Bucks won Lackawanna Division 3 and District 2 Class 4A titles.

Small School No. 1 Riverside won twice in the state tournament, giving the District 2 Class 3A champions their first state quarterfinal appearance since 1991.

District 2 Class 2A champion Holy Cross lost, 40-39, to Mount Carmel in the first round of state play.

Montrose was the Lackawanna Division 4 champion.