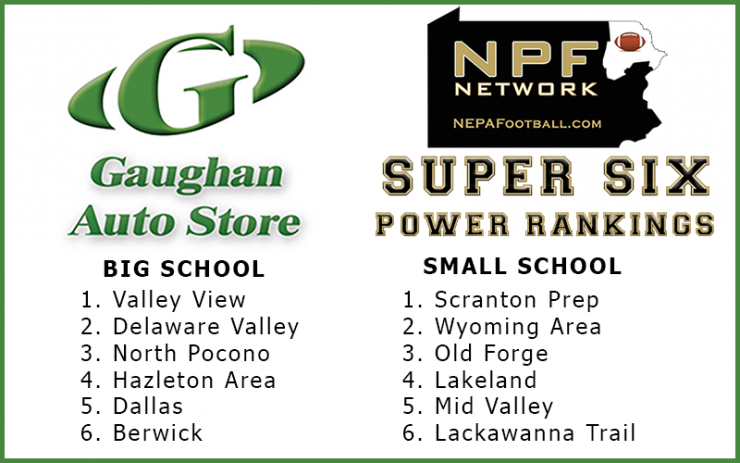 The first week of the postseason was a perfect one for the teams that make up the Gaughan Auto Store Super Six Football Power Rankings.

With routine matchups all around and none of the ranked teams facing each other, Super Six teams went 10-0 with two byes last week.

There will be no repeat in the second round of the playoffs.

Of the 12 teams in the weekly rankings of Lackawanna Football Conference and Wyoming Valley Conference teams on NEPAFootball.com, 10 of them square off with each other in five matchups of ranked teams.

All six Big School teams are paired against each other.

No. 1 Valley View hosts No. 6 Berwick and No. 3 North Pocono travels to No. 5 Dallas in District 2 Class 4A semifinals.

Second-ranked Delaware Valley is home against No. 4 Hazleton Area for the District 2 Class 6A championship.

There is also a 2-vs.-4 meeting in Small Schools with Wyoming Area hosting Lakeland in a District 2 Class 3A semifinal.

Top-ranked Scranton Prep returns from a week off to host No. 5 Mid Valley in another 3A semifinal.

No. 3 Old Forge, which also had a week off, plays Belmont Charter from Philadelphia in a District 1-2-12 Class A Subregional championship game.

Last week’s 10 games against unranked opponents resulted in the ranked teams advancing with wins by a combined margin of 367-112. Mid Valley had to rally past Western Wayne, 28-27, but each of the others won by at least 21 points.