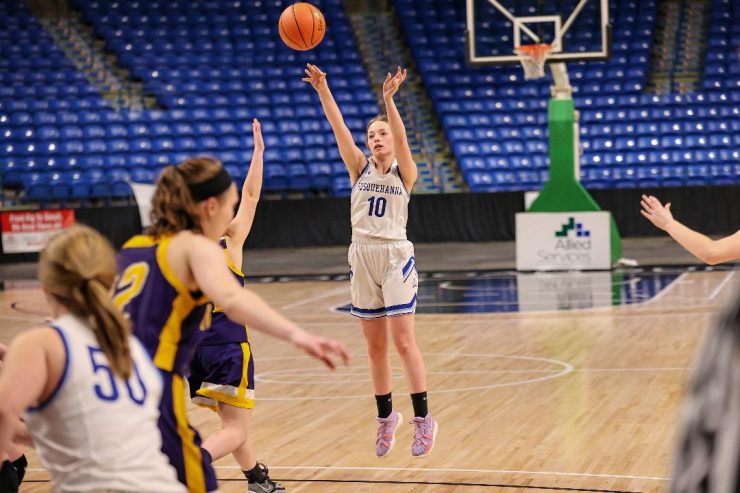 Three adds have been posted to the coverage from Thursday at Mohegan Sun Arena at Casey Plaza where the Holy Redeemer boys, Dunmore girls and Susquehanna girls won titles.

A new blog will be started to cover the action on Friday.

WILKES-BARRE TWP. — Holy Redeemer made nine 3-pointers while holding Riverside without any until the last 5:08 of a 52-28, Mercy Rule romp through the District 2 Class 3A boys championship game.

Justice Shoats led the way with 16 points and 5 assists.

Daryl Wright and Zach Perta each went 3-for-5 on 3-pointers while adding 11 points.

Return to this page for more coverage of Thursday’s tripleheader action.

WILKES-BARRE TWP. — Daryl Wright hit three of his first four 3-point attempts to help Holy Redeemer to a 21-11 halftime lead over Riverside in the District 2 Class 3A boys final.

Wright was the only player to make a 3-pointer in the first half.

Justice Shoats has seven points and two steals for the Royals.

WILKES-BARRE TWP. — The Photo Gallery, by Tim Drewes, from Class 4A girls game between Dunmore and Scranton Prep has been posted at: https://nepasportsnation.com/piaa-district-2-class-4a-girls-photo-gallery/.

WILKES-BARRE TWP. — Ciera Toomey was unable to play in the second half of Dunmore’s 43-42 victory over Scranton Prep, but she said she has been told that early indications are the injury to her right knee “is not an ACL.”

Further evaluation will be needed, but Toomey is hopeful the injury is not serious enough to keep her out of the state playoffs.

“When I stepped with my knee I just felt something wrong, but when I threw it up, the shot went in, which made it a tiny bit better,” Toomey said the three-point play that she started and Adriana Pacewicz finished coming in off the bench.

WILKES-BARRE TWP. — Tim Drewes’ Photo Gallery from the Class A girls game is posted at https://nepasportsnation.com/district-2-class-a-girls-photo-gallery/.

Dunmore played the entire second half without first-team, all-stater Ciera Toomey, who suffered a right knee injury in the first half.

Return to the blog for more on this and other games.

WILKES-BARRE TWP. — Ciera Toomey returned to the floor with her right knee taped and warmed up with her team, but did not start the second half.

WILKES-BARRE TWP. – The District 2 Class 4A girls championship game took a dramatic turn with 1:28 left in the half when Ciera Toomey, Dunmore’s nationally ranked prospect, suffered an apparent right knee injury while scoring the go-ahead basket.

Toomey started a three-point play, then Moriah Murray hit a 3-pointer with a second left for the last six points of the half and a 22-16 lead over Scranton Prep.

Toomey, rated by ESPN.com as the country’s third-best women’s basketball prospect in the high school Class of 2023, had 10 points, 5 rebounds and 2 blocked shots.

WILKES-BARRE TWP. — Scranton Prep putting together an upset bid against top-seed Dunmore in Class 4A girls.

NEPABasketball.com’s panel predicted the outcome of the 11 title games. Chris Kucharski and Doug Walsh each correctly predicted Susquehanna’s 14-point win over Forest City in the opener. The consensus had the game as Susquehanna favored by 12.

See all the predictions at: https://nepabasketball.com/2021-22/Predictions/ChampionshipPanel

Meghan Kiernan had 12 points and 12 rebounds for the Lady Sabers.

Dunmore and Scranton Prep in Class 4A girls up next.

READER NOTE: We have moved the blog here from our partner website, NEPABasketball.com because of technical difficulties.

Susquehanna took a 15-8 lead over Forest City at halftime of the Class A girls game to open the three-day, 11-game schedule.

Forest City scored the first four points, then went 11:35 without scoring again as defending champion Susquehanna scored the next 11 points.

WILKES-BARRE TWP. – We’re all set at courtside, where we’ll spend most of the next three days, bringing coverage of the 11 District 2 basketball championship games from the Mohegan Sun Arena at Casey Plaza.

There are three games on today’s schedule.

Top-seed and defending champion Susquehanna (9-12) gets it started against second-seeded Forest City (3-20) in the Class A girls final. That game is coming up in minutes with a 4:00 p.m. scheduled tip.

The first boys game of the championship series is at 8 in Class 3A when the past two champions square off. Holy Redeemer (20-4) is the top seed. Riverside (15-7) is the defending champion.

We’re just getting started. Check back for reports throughout the next three days.