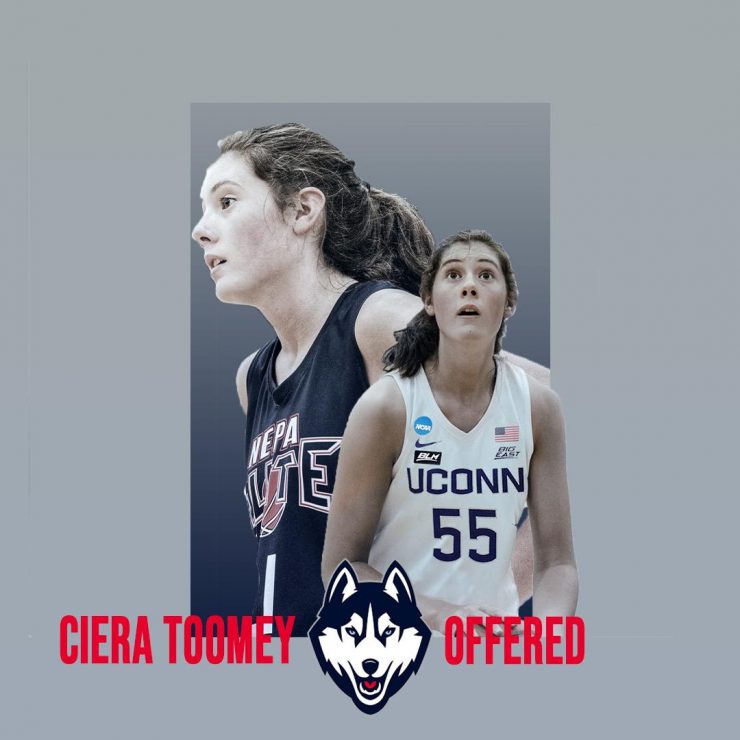 Ciera Toomey has always been impressed with Geno Auriemma’s University of Connecticut teams.

Now, the feeling is obviously mutual.

Auriemma offered Toomey a full basketball scholarship to join the most successful program in women’s college basketball during a FaceTime call Tuesday.

Toomey, the 6-foot-3 NEPA Elite Clark 17U forward, announced the offer on her Twitter account. She discussed the development prior to taking the floor for a summer league game at Riverfront Sports with her high school teammates from Dunmore where she is a rising junior.

“My Mom (Carrie) has always put basketball on TV for us,” Ciera said. “As my sister (Victoria) and I got older and were watching, I realized the team that was always winning was UConn.”

The Huskies have won a record 11 national titles under Auriemma, all since 1995. They also have, by far, the best winning percentage in the 2000s and the most graduates playing in the WNBA.

“I kind of grew up just watching their style of basketball and the great players that came through their program,” Toomey said.

After watching Toomey play in person in the final NEPA Elite Clark team tournament entry of the summer season and talking to her twice on the phone, Auriemma offered the first-team Class 4A high school all-stater the chance to join that program.

“If you know women’s basketball, you know UConn.

“To watch them and all of a sudden talk with their head coach and be offered from them, it’s such a cool feeling.”

The offer is the 23rd for Toomey – 21 scholarships and two chances to play for non-scholarship Ivy League schools.

Toomey has not yet scheduled any official recruiting visits, but has planned an unofficial visit to Big Ten champion Maryland Aug. 4.

Her initial reaction Tuesday was that the Storrs, Conn. campus will be added to the places she will need to get a look at as the next steps in the recruiting process unfold.

“I definitely think I’ll try to make a visit up there to see the facilities and see the school,” she said.

Toomey was the leading scorer, rebounder and shot blocker as well as the most accurate shooter when NEPA Elite, the AAU club out of Riverfront Sports in Scranton, repeated its Hoop Group Showcase League title. She also led the team in scoring last season despite being the youngest player on the team both seasons.

Carrie (Bowen) Toomey, like her daughters, was a multi-year, all-star on championship teams at Dunmore. She went on to make the Franklin & Marshall Hall of Fame and rank second in the school in career scoring; third in assists, steals and blocked shots; and fourth in rebounding at the time of her graduation. After playing professional in the English National League, she has remained active in the game as a coach, including with the NEPA Elite Clark team.

UConn is coming off a season in which it went 18-0 in the Big East regular season; added three more wins, all by at least 34 points, to win the Big East Tournament title; went 28-2 overall; and reached the Final Four where it lost to Arizona, 69-59, in the national semifinals.

Auriemma came to Connecticut for the 1985-86 season to take over a program that had just one winning season. In his 36 seasons, he is 1,119-144 with 6 perfect seasons, the 11 national titles, 21 Final Fours and 53 conference regular season or tournament championships.

ESPN-W’s rankings list Toomey as the 14th-best recruit in the Class of 2023. ESPN’s recruiting coverage also listed her as one of 15 Uncommitted Players To Watch this summer in women’s basketball recruiting.