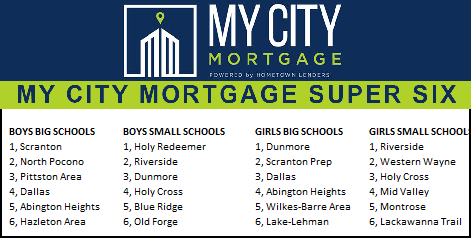 North Pocono used two wins over ranked Small Schools to climb among Big School boys teams in the My City Mortgage Super Six Power Rankings of District 2 teams, which were joined this week by Blue Ridge and Hazleton Area.

All four No. 1 teams held their ground, but there was plenty of movement in the boys half of the rankings.

Pittston Area, Dunmore and Holy Cross also moved up on the boys side while Abington Heights was the only girls team to climb in the rankings. The latest rankings were released by our partner website, NEPABasketball.com, Sunday morning as teams headed into a week of primarily tournament action.

Records listed here include wins by Abington Heights and Riverside and a loss by Lackawanna Trail in the Taylor Lions girls tournament, the only event to begin Sunday night.

As was the case through most of the last season, the Big School boys rankings underwent the biggest shake-up.

Scranton (3-0) did not play during the week and remained in the No. 1 spot.

The next three teams all have one loss and all three suffered that loss by six points or less while away from home without a key player.

North Pocono (5-1) moved up from fifth to second after winning two straight games that matched defending Lackawanna League division champions against each other. The Trojans handed No. 2 Small School Riverside its first loss, 58-51, and helping to knock Elk Lake out of the rankings with a 53-34 victory.

Pittston Area, the team that earlier handed North Pocono its only loss, moved from fourth to third. The Patriots hammered rival Wyoming Area, 57-32, in their only game to improve to 4-1.

Dallas dropped two spots to fourth after losing its only game, 75-69, at Abington Heights.

Abington Heights, however, lost its other game, 45-44, to Wyoming Valley West and slipped one spot to fifth.

Mid Valley, the former No. 6, lost its only game, 58-51, to West Scranton and dropped out of the rankings.

Riverside (5-1) held second among Small School boys despite the loss to North Pocono. The Vikings defeated Montrose, 58-29, in their other game.

Dunmore used a 2-1 week to get to 4-2 and climb one position into third. The Bucks have suffered their two losses against Big Schools with a combined 9-2 record.

Blue Ridge recovered from its loss to Holy Cross to defeat Old Forge, 62-61, in overtime. The Raiders (3-2) join the rankings in fifth.

Elk Lake fell out of the rankings when it lost twice. In addition to North Pocono, the Warriors fell to Wyalusing Valley, a team that rankings newcomer Blue Ridge defeated earlier this season.

Dunmore, Scranton Prep and Dallas combined to win their four games, each by double-figures margins, to remain 1-2-3 in the Big School girls rankings.

Lake-Lehman, which did not play, remains sixth.

Riverside ripped North Pocono, 59-18, and Montrose, 55-28, to remain as the top Small School girls team. It added a 56-9 victory over West Scranton Sunday after the rankings were announced.

Mid Valley won twice to improve to 5-0 with an average of just 17 points allowed per game.

The other four teams each lost once to a ranked opponent, either a Big School or the Small School team.