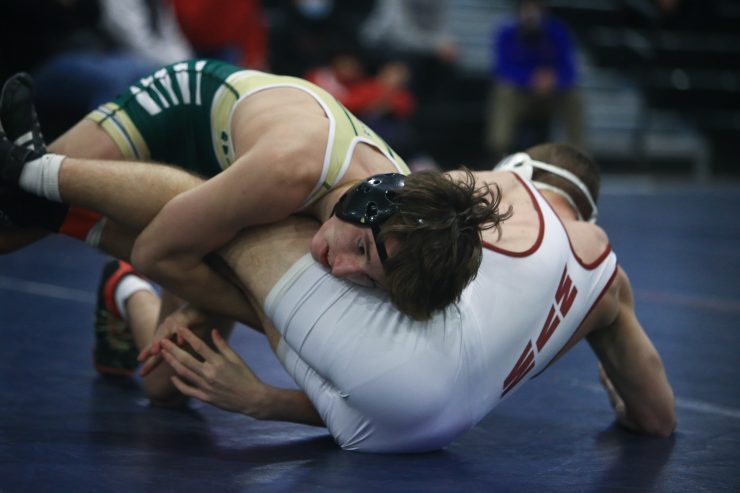 PLAINS – Wyoming Area advanced five wrestlers to the finals and captured three titles, including one by Outstanding Wrestler Jaden Pepe in the final bout of the day, Saturday while capturing the team championship of the Wyoming Valley Conference Tournament.

Pepe built a 12-4 lead midway through the second period, then pinned Ian Ratchford from Wyoming Valley West in 3:15 of their 126-pound final. He reached the final by defeating Jorven Rodriguez from Hazleton Area, 18-8, in the semifinals after receiving a quarterfinal bye.

The unbeaten, defending state champion was not alone.

Freshman Anthony Evanitsky and Cooper Price also produced titles for the Warriors back-to-back at 145 and 152 pounds early in the final round.

Connor Wrobleski, at 189, and Nate Obrzut, at 285, joined them in the finals to help Wyoming Area outscore Hazleton Area, 190½-183, in what had early in the day developed into a two-team race for the title in the 11-team event.

“They go hard every day.”

With help from four wrestlers who reached the consolation finals and a total of 10 in the top five in their weight classes, Wyoming Area won the tournament for the first time.

Since the WVC Tournament was created in 2010, the Warriors had never finished first in it, or any other tournament.

Wyoming Area was second in 2015, but ninth or worse in each of its other 10 appearances in the tournament, which was not held last year because of COVID.

Pepe, Price, Evanitsky and Wrobleski all have at least 20 wins with either zero or one loss while Obrzut, another freshman, is 15-8.

It all adds up to Pepe, who has had plenty of individual state tournament experience, hopeful of the making it to the team dual meet tournament as well.

The other titles were the result of dominant efforts in the final.

Evanitsky won by technical fall, finishing his final in less than two periods after racking up a 17-2 lead.

“I was friends with him before,” Pepe said of Evanitsky. “I knew he was going to blend right in.

“I knew this was coming.”

Price finished his bout in 51 seconds to protect his perfect record.

Wrobleski, a three-time District 2 Class 2A champion, took an unbeaten record into the final where he lost 2-0 to returning state Class 3A medalist Bryce Molinaro, a two-time district champion from Hazleton Area.

Molinaro broke the scoreless tie with a quick escape in the second period and added a penalty point while riding out Wrobleski for the final two minutes of the bout.

“I knew he was a tough opponent,” Molinaro said. “I knew what I had to do to win that match and I stuck to my game plan and it worked.”

The Molinaro-Wrobleski bout was one of the two close finals.

Price had one of three first-period pins in the final.

Julian Everitt from Pittston Area started the finals with the shortest bout, a 34-second pin at 132.

Berwick’s Bruce Hartman pinned Obrzut late in the period at 285.

Hazleton Area, Wyoming Valley West and Pittston Area each had a second champion and each of them won a decision by shutout.

Simon Zamudio won for Hazleton Area at 113, Zander Remakus posted a major decision for Wyoming Valley West at 120 and Jimmy Spindler won for Pittston Area at 160.

Hanover Area’s Zach Murphy came up one point short of a technical fall with a major decision in the 138-pound final.

Wyoming Area’s team title was the result of having the most champions and most finalists.

Hazleton Area and Crestwood followed in the team standings and tied for the most consolation finalists with five. Hazleton Area had the most third-place finishers with four, allowing it to match Wyoming Area with seven on the three-person medal stand.

The tournament included 11 of the conference’s 12 teams. Tunkhannock pulled out late in the week because of a COVID situation.

Higher seeds dominated the early rounds with all 13 number-one seeds making the semifinals and all but one reaching the final.

Fourth-seeded Devin Youngcourt from Hazleton Area made the 145-pound final by pinning top-seeded Aiden Jaskulski from Nanticoke in 1:50.

In the bottom half of the brackets, 10 of 13 second seeds advanced to finals with Hazleton Area’s Zamudio and Crestwood’s Bibla going on to win titles.

Bibla was down, 10-9, when he pinned Aaron Crossley of Wyoming Area two seconds before the second-period buzzer of their 215-pound semifinal.

Zamudio advanced with a first-period pin while Berwick’s Kyle Winter also won by pin in the 120-pound semifinals.

The sixth-seed victories were a pin by Lake-Lehman’s Chad Honeywell (285) and decisions by Wyoming Area’s Jonathan Stone (132) and Pittston Area’s Dominic Innamorati (145).