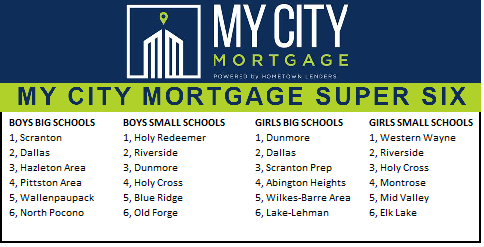 Western Wayne took over No. 1 in Small School girls, representing the first change at the top in this season’s My City Mortgage Super Six Basketball Power Rankings of District 2 teams.

The latest rankings were released Sunday night on NEPABasketball.com, our partner website.

Scranton’s boys and Dunmore’s girls hold down the No. 1 Big School spots, which are for teams in Classes 6A, 5A and 4A.

Western Wayne is 7-2 after winning three times during the week.

Riverside is 6-2 after losing its only game.

The results of the last week also moved Western Wayne ahead of Riverside in the District 2 Power Ratings race used to determine the top seed in the district playoffs.

The Western Wayne-Riverside girls change is not the only difference in this week’s rankings.

Dallas, Hazleton Area, Dunmore and Blue Ridge gained in the boys rankings while Montrose moved up in the girls rankings.

The Wallenpaupack boys join the rankings for the first time this season while the Lake-Lehman and Elk Lake girls return to the rankings.

As is often the case, the biggest change is in the deep pool of Big School boys teams.

Dallas moved up two spots, returning to second, where it began the season. The Mountaineers defeated Pittston Area, 56-52, and Wyoming Valley West, 76-45.

Hazleton Area remained unbeaten within the district when it opened its Wyoming Valley Conference Division 1 season with a 56-29 rout of Tunkhannock. The Cougars made the biggest jump, going from sixth to third.

Pittston Area is fourth, losing one spot. The Patriots recovered from their home-court loss to Dallas to defeat Crestwood, 42-28.

Wallenpaupack joins the rankings in the fifth spot. Another team that has suffered both its losses to teams outside District 2, the Buckhorns made their claim by defeating former No. 2 North Pocono, 40-36. They also handled Honesdale, 51-29.

North Pocono dips from second to sixth after a 2-1 week.

Abington Heights also went 2-1 and falls from fifth to outside the rankings after a 60-51 loss at Berks Catholic.

The Royals won twice to remain unbeaten, getting their second win against District 4 Class 6A opponent Williamsport, 51-50, Saturday night on a Justice Shoats 3-pointer at the buzzer.

The loss by the Vikings did impact the rest of the rankings.

Dunmore used its 48-32, home-court win over Riverside to highlight a 2-0 week and move up two spots to third.

Holy Cross lost its only game and fell to fourth.

Dunmore and Abington Heights won big in their only games and Wilkes-Barre Area went 2-0.

Lake-Lehman won three times, including going to Holy Redeemer for a 50-37 win, to take the sixth spot from unbeaten and idle Pittston Area.

Western Wayne and Riverside are followed in Small School girls by Holy Cross, which defeated former No. 4 Lakeland, 58-44, in its only game.

Mid Valley won its only game and held fifth.

Elk Lake went 3-0 for the week, including a 47-45 victory at Class 6A Scranton, to rejoin the Super Six in sixth.

Lakeland fell out of the rankings.