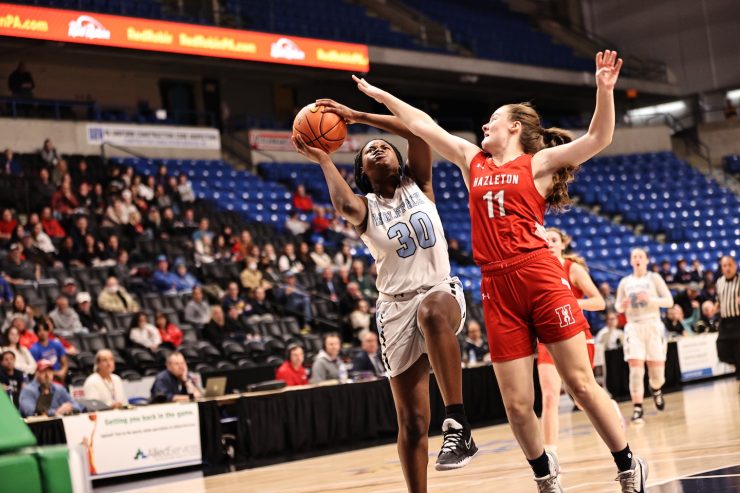 WILKES-BARRE – Gloria Adjayi made her first 4 shots and scored 10 points in the game’s first 12:08.

That was nothing compared to what Adjayi and her teammates did on the defensive end of the floor.

With Adjayi making six steals and blocking five shots, Wilkes-Barre shut down Hazleton Area for more than three quarters of a 45-24 rout and a repeat of its District 2-4 Class 6A Subregional girls championship at the Mohegan Sun Arena at Casey Plaza.

“We had to watch their back-door cuts and our guards getting up too high,” Adjayi said. “But, the thing that really helped us today was our communication.

As a result, no one from Hazleton Area was scoring.

The Wolfpack limited the Lady Cougars to 10 points until the game was in the Mercy Rule early in the fourth quarter.

Wilkes-Barre Area shut out Hazleton Area for 11:52, including the entire second quarter, while building a 29-6 lead while forcing the Lady Cougars into a 2-for-34 start from the floor.

“We stressed that all week long and did everything we asked of them.”

Adjayi controlled the game on both ends of the floor. She had 12 of her 14 points before only taking two shots in the second half. Along with her defensive numbers, she grabbed four of her seven rebounds on the offensive end and dished out four assists.

“The fire in her eyes was there that I don’t always see,” Mushock-Namey said of Adjayi, a four-year starter, all-star and career 1,000-point scorer who has spent much of her senior season making sure she kept teammates involved. “She likes to be the all-around player, but today you could tell she wanted to dominate.

“She did what she had to do and I don’t think there was anybody out there who was going to stop her.”

Danayjha Moore went 4-for-5 from the floor while adding 10 points and also had 4 assists.

Shelby Ardo-Boyko grabbed a team-high eight rebounds and made four steals while Eternity Aiken came off the bench to score seven points and block two shots.

Wilkes-Barre Area held Hazleton Area without a field goal for the first 5:22 while taking leads of 5-0 and 9-1.

Wilkes-Barre Area then scored 11 more in a row – the last 9 of the third and Ardo-Boyko’s basket off an Adjayi feed – to arrive at the Mercy Rule at 40-10 just 20 seconds into the fourth quarter.