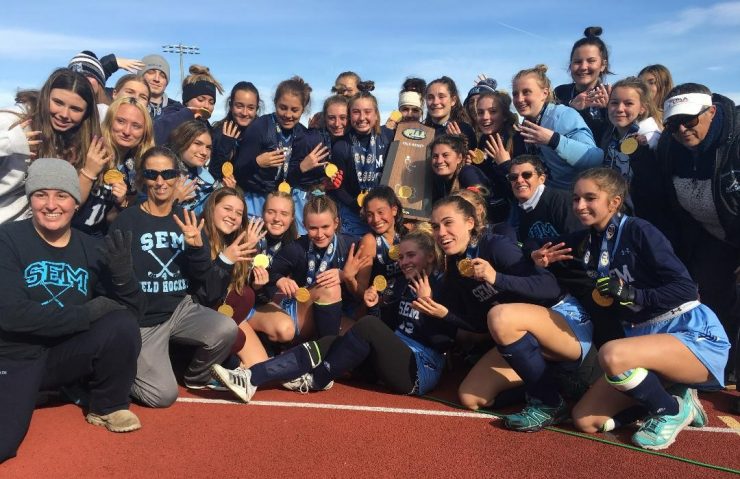 Emma Watchilla had a hat trick, Isabella Pisano scored twice and Ella Barbacci did a little bit of everything Saturday morning as the Blue Knights blitzed Oley Valley, 6-0, in the state Class A championship game at the Zephyr Sports Complex.

Watchilla scored twice in the last three minutes of the half for a 3-0 lead, then added the last goal.

Pisano scored the first and, therefore, game-winning goal in the state final for the second straight year, then added another.

Barbacci had a goal, two assists and two defensive saves.

The contributions did not end there.

Anna Mozeleski had three assists and sophomore Laine Cabell had a six-save shutout in goal.

“Pretty amazing,” Wyoming Seminary coach Karen Klassner said, making her way through all the players who deserved praise. “Laine, for a sophomore, she played great in goal. I just have to give credit to everybody.

“The kids were just on today. They knew they had to be.”

And, they were, separately and collectively.

It was the most decisive performance in 95 championship games in the 48-year history of PIAA field hockey playoffs.

Wyoming Seminary broke a record that its 2010 team shared. Penn Manor, over Hershey in Class 3A in 2008, and Wyoming Seminary, over Lehighton in Class 2A two years later, each won by 5-0 margins.

The Blue Knights got the scoring started on their second penalty corner and second shot of the game.

Mozeleski took Olshemski’s insert well above the circle, directly out in front of the cage. Mozleski drove the ball back in and Pisano deflected it up into the cage.

“We do it a lot when we get to states, because the (flyers) coming out on corners are usually so fast that it gives us a little bit of extra time on our corners to do our plays,” Klassner said.

Oley Valley had nine penalty corners, five of which resulted in repeat attempts for an additional infraction against Wyoming Seminary. The Lynx got 8 of their 11 shots off of corners, but could not score.

Although Wyoming Seminary sometimes sent the ball out past the dotted line, five yards past the circle, in a deliberate approach to switch from penalty corner to regular shooting rules, its seven penalty corners, one way or another, led to six shots and three goals.

“We work a lot on our corners,” Klassner said. “We feel that is our bread and butter.”

Barbacci set up Watchilla twice for goals with 2:59 left and then as time was expiring in the second quarter.

Watchilla tipped Barbacci’s drive, which came from outside the circle, for her first goal.

As time was running out, Watchilla took a lead pass from Barbacci, who was approaching the circle, and swept the ball into the goal.

“We know that defense, once you get in the circle, they want to step to the ball and pressure you as fast as they can,” Watchilla said. “We practice a lot, sending it in from the outside and cutting in front of the defenders.”

The Blue Knights made it three goals in 6:04 for a 4-0 lead on Pisano’s third-quarter goal off a pass on which Mozeleski found her in front.

Wyoming Seminary had a 13-11 shot lead over Oley Valley and scored on five of its last seven shots.