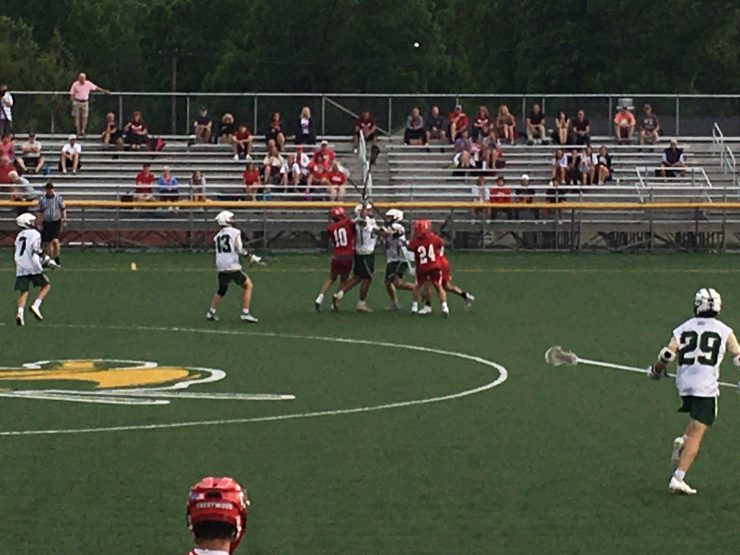 ACC downs Crestwood in 2A semi

EMMAUS – While Crestwood was busy dominating District 2 boys lacrosse and closing the gap on longer-established programs from the southern-most parts of the state, a new obstacle emerged.

Allentown Central Catholic became the first District 11 team to reach the state semifinals, then took another step Tuesday when St. Joseph’s University commit Jack McGorry scored 10 goals and assisted on 2 more to lead the Vikings to a 16-6 victory over the Comets in a Class 2A game.

Crestwood, the only District 2 team to make it to a Pennsylvania Interscholastic Athletic Association state semifinal in either boys or girls lacrosse, accomplished that in 2019 and made it two in a row with this season’s appearance.

Maintaining that level was not a given considering all teams missed the spring of 2020 because of the pandemic.

“We didn’t know what we had,” Crestwood coach Brian Zabroski said. “When you have a two-year gap from your last season, it’s a complete turnover of players.”

The Comets face a similar challenge with 13 seniors graduating, but Zabroski wants his program continuing to aim higher, rather than just protecting the turf it has already gained as repeat Wyoming Valley Conference and district champion.

“It’s always to go to the next step,” Zabroski said. “These guys now know what the semifinal looks like twice. It’s going to take a lot of work to get there, but you’re always looking to get to that championship level.

“I feel like it slipped away today, but when you get to the Final Four, you expect there to be great lacrosse teams. If there wasn’t, then why are we doing this?”

“What you see is a team like Allentown has very skilled players from end-to-end and their goalie is phenomenal, too,” coach Zabroski said. “Through their midfield substitutions, they really put a full team out there and there aren’t many gaps.

“For our team, the challenge is to make sure that we fill those vacancies that are going to be leaving us with guys who are committed to improving their individual skills in the offseason. The stick skills of that team were very good. It goes back to individual skills.”

McGorry was the most skilled player on the field, something he showed by scoring twice in the first two minutes and by breaking the game wide open at the end of the third quarter.

“We did everything we could to try to contain him,” coach Zabroski said. “We made some switches, but he certainly got the better of us early.”

Tyler Schifko, who scored his 100th career goal in the process, matched McGorry with four goals and an assist for an 8-2 halftime lead.

McGorry, who assisted a goal with 2:36 left in the third quarter, scored three times in the final 1:25 of the third and again 1:55 into the fourth.

Allentown Central Catholic opened the lead to 16-3, reaching the Mercy Rule of a running clock for a 12-goal lead with six seconds left in the third.

Crestwood gained a measure of pride by working the game back out of running clock conditions by scoring the last three goals.

“We had a pretty big deficit, but we wanted to win the fourth quarter to end the game, season and career on a good note,” Trey Zabroski said. “ … I’m really proud of my team for staying in there to the end and not just giving up.”

Trey Zabroski, who had an assist, and Noah Schultz scored two goals each for Crestwood. Chandler O’Farrell and Brendan Dennis scored the other goals.

Allentown Central Catholic had a 32-17 lead in shots and converted two of its five man advantages. The shot advantage was 29-9 through three quarters.

“Half of me is disappointed because we didn’t get to the next one,” coach Zabroski said. “The other half of me is looking at the big picture. There’s only four teams in Double-A playing right now and we’re one of them and there are (209) lacrosse teams in the state, so as much as I’m disappointed, I’m really proud of what this team has done.”

Allentown Central Catholic advances to play Mars, which knocked out defending state champion Bishop Shanahan, in Saturday’s state final. A win by the Vikings would make it three times that Crestwood’s state playoff run ended against the eventual state champion.