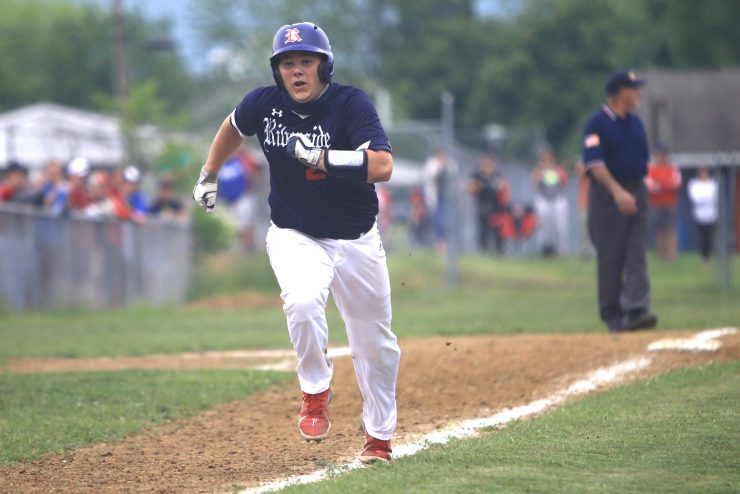 PHOTO: Riverside’s Charles Azarsky, who earlier drove in four runs, heads for home with the run that ended the game on the 10-run rule. (Zachary Allen Photo)

TAYLOR – Charles Azarsky went deep into center field to run down one flyball, then sent another beyond the reach of two Old Forge outfielders, all in the third inning Wednesday.

By the time he was done, Azarsky had permanently turned the momentum back in Riverside’s favor, allowing the unbeaten Vikings to roll to a 12-2, six-inning victory in the District 2 Class 2A baseball championship game.

“Our bottom of the lineup is really what started our big inning in the third,” Riverside coach Sean Hughes said. “And, Charlie Azarsky, our number-nine hitter is unbelievable. He’s our unsung hero.

“You think a nine hitter can’t hit, but he’ll do anything to get on base. He’s been hit by (five) pitches this season. He knows his role, get (leadoff hitter) Jason (Janesko) another at-bat.”

Old Forge tied the game, 2-2, by scoring a run on two hits in both second and third innings.

The hit Azarsky prevented by running down Old Forge’s hardest-hit ball of the day, Josh Spinder’s shot to the vast reaches of center field at David Noakes Park, prevented the Blue Devils from taking the lead.

“I saw it up in the air and I just tracked it down,” Azarsky said. “I feel like I can track down any ball that comes my way.”

After Sean Donovan got the first two outs of the third inning, making it 7 out of 8 he retired at that point, 11 of the next 12 Vikings reached base. Six straight got on with two out in the third, then the first five reached in the fourth.

Riverside (21-0) scored eight runs in that stretch, four in the third and four in the fourth, with Azarsky driving in four.

Azarsky came up with the bases loaded in both innings. His double to left-center drove in three runs in the third and his walk produced another in the fourth.

“Get the ball in play or at least get a walk,” Azarsky said. “Get people in to score is all I needed to do.

“I strive to be in that position.”

Azarsky has provided a spark from the ninth spot in the order lately, going 9-for-16 (.563) in the last six games, and he is hitting .391 on the season, but the bases-clearing double was just his second extra-base hit of the season.

“It doesn’t matter where you hit, it’s how you perform,” Azarsky said, “and we all perform really well.”

Azarsky’s shot gave Riverside a 6-2 lead and the Vikings cruised from there.

“We came into the dugout and our thing was, ‘let’s get some hits and win the inning’,” Azarsky said. “We’ve always got to win the inning.

R.J. Santarsiero did not allow another hit. Zach Day got the last out on the combined four-hitter after Santarsiero struck out seven in his first pitching start against Riverside’s biggest rival.

“We lucked out that they had not seen R.J. yet,” Hughes said. “That wasn’t planned, but it was just the way it worked out with the way our rotation was going.”

There was plenty of offensive support for the freshman pitching ace, who improved to 8-0 with an 0.43 earned run average.

“He battles whether he has his stuff or doesn’t have his stuff,” Hughes said. “ … He’s a competitor.”

Azarsky reached base all four times with two hits and two walks.

Rickert drove in the decisive run, ending the game on the 10-run rule with one out in the bottom of the sixth after Azarsky and Janesko singled and Santarsiero sacrificed them over.

Nico Killino and Joe Granko had RBI singles for Old Forge, which made the final as a seventh seed by putting together two road wins. The Blue Devils finished 9-12.

Donovan drew a walk and then singled to improve to 9-for-9 for the district tournament before Santarsiero struck him out in Donovan’s last at-bat.

In the last 14 District 2 tournaments, Old Forge has made 11 finals and won 8 titles.

Riverside has a different playoff history.

Monday’s Pennsylvania Interscholastic Athletic Association first-round game will be the Vikings’ first since then. They will play District 4 champion Sayre (21-1) at Bowman Field in Williamsport at 4 p.m.