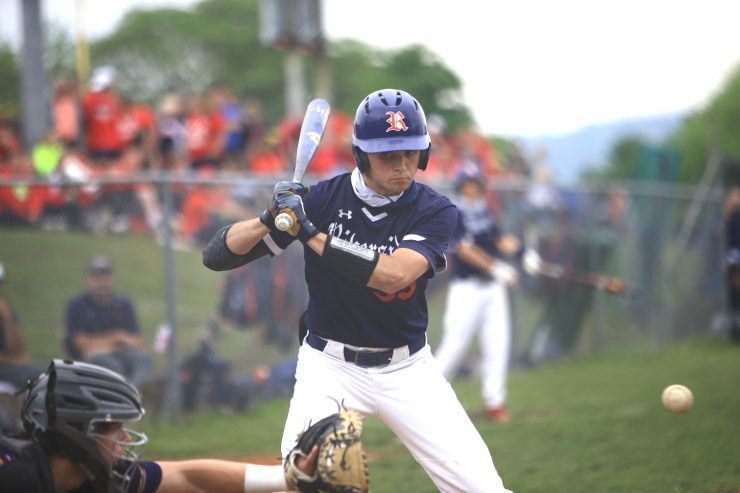 Riverside scored early and held on late Wednesday afternoon to preserve sole possession of its Lackawanna League Division 3 baseball lead with a 4-2 victory over rival and host Old Forge.

The game was a rematch of last year’s District 2 Class 2A baseball final that Riverside also won.

The Vikings scored their four runs in the top of the first inning, then, after six scoreless innings, turned back a rally in which the Blue Devils scored twice in the bottom of the seventh.

Trevor Balcerzak hit a three-run homer in the first inning.

Jimmy Decker relieved and made it through the seventh inning when Old Forge scored two unearned runs.

Following a walk and error to start the bottom of the seventh, T.J. DiMattia singled to load the bases for Old Forge with none out.

Josh Spindler grounded out, but broke the shutout, then Joseph Granko drove in the second run with a sacrifice fly.

DiMattia gave Old Forge a shot at the comeback with six scoreless innings of relief. He struck out four while giving up two hits and five walks.

Chad Taddonio had three hits for Riverside. Jason Janesko started the game with a double and scored the first run.

Old Forge had a chance to force a tie for first place, but instead Riverside solidified its lead.

The Vikings, the No. 1 Small School in the Riverfront Sports Super Six Baseball Power Rankings of District 2 teams, improved to 5-0 in the division and 8-1 overall to also lead the ratings race for the Class 2A top seed. Fourth-ranked Old Forge fell to 3-2 and 5-3.

Tommy Rohan struck out 14 in a four-hitter for Holy Cross, which scored all its runs in the first two innings of a 5-1 victory over Western Wayne.

Lakeland scored four times in each of the first two innings on the way to a 14-5 win over Carbondale.

Dylan Labukas hit a three-run, third-inning homer to erase an early three-run deficit and sent Scranton on its way to a 9-5, Lackawanna Division 1 victory at Valley View.

Jeremiah Ortiz had a double, single and two RBI.

Matt Saita, who also drove in a run, and Jake Leonori also had two hits.

Delaware Valley pulled out a 10-9 victory over visiting Honesdale in a Lackawanna Division 2 game that featured 10 seventh-inning runs.

Honesdale scored six times in the top of the inning for a 9-6 lead.

Corey May’s two-out, two-run double in the bottom of the inning lifted Delaware Valley to the victory.

Christian Galimi was 3-for-3 with three runs scored for the Warriors.

Bryce Dressler, Max Mickel and Trent Gombita each had three hits for Honesdale.

Dressler had two doubles and three RBI. Mickel was 3-for-3.

Jack Mathis went 4-for-4 with a grand slam in the eight-run seventh inning to break open Wyoming Area’s 12-1 WVC Division 2 romp over Nanticoke.

Hazleton Area held its Division 1 lead while Wyoming Area moved into a tie with Lake-Lehman for the Division 2 lead.

Williamsport shut out Wyoming Seminary, 9-0, in a non-league game.