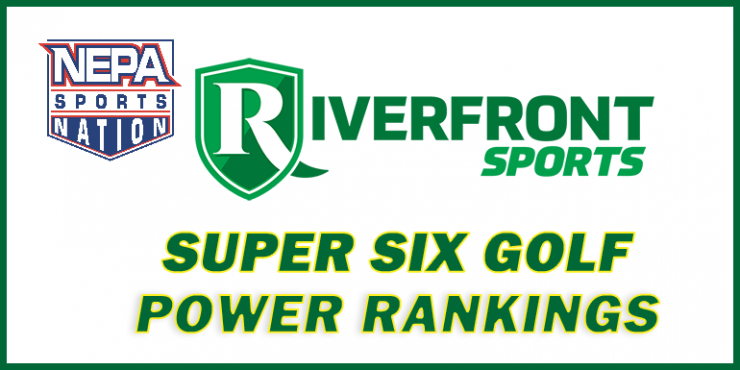 Lake-Lehman and Abington Heights, the two teams that finished second in last season’s final rankings, open the season as the No. 1 teams in the Riverfront Sports Super Six Golf Power Rankings of District 2 teams.

Dallas and Scranton Prep closed out last season as the top teams in the rankings determined by NEPASportsNation.com. Those rankings were sponsored last season by the Scranton Golf Center. This season’s rankings, sponsored by Riverfront Sports, were released Thursday morning, prior to the season openers later in the day.

Lake-Lehman returns District 2 Class 2A and Tom Tryba Memorial Tournament champion Michael Lugiano and two other players who were among the four Wyoming Valley Conference golfers to shoot in the 60s at last year’s Tryba Tournament.

Brothers Cael and Eli Ropietski are also back after being a big part of Lake-Lehman’s unbeaten regular season. Cael Ropietski led all WVC Class 2A players at the conference tournament and went on to play in the state tournament, but his brother was ineligible for state and district postseason competition because of a Pennsylvania Interscholastic Athletic Association ruling regarding his transfer from Holy Redeemer.

All players are fully eligible this season for Lake-Lehman, which suffered its only loss while playing without Eli Ropietski in the District 2 Class 2A championship match to then-defending state champion Scranton Prep.

While Lake-Lehman builds around three players already established among the top in all of District 2, most of the rest of the district’s contending teams are facing adjustments from significant graduation losses, leaving open a possibility of early-season movement in the rankings.

Abington Heights is followed in the Big School rankings for Class 3A teams by Crestwood, Hazleton Area, Dallas, North Pocono and Wallenpaupack.

Lake-Lehman and Scranton Prep are followed in the Small Schools by Riverside, Montrose, Lackawanna Trail and Wyoming Seminary.

Abington Heights finished second in Lackawanna League Division 1 last season and lost a close match in the league’s Class 3A final to North Pocono on its home course.

The WVC’s top three teams are next, but in a different order than how they finished last season.

Dallas avenged its loss to Hazleton Area in the playoffs. The Mountaineers finished the season as WVC Division 1 champion, District 2 Class 3A champion and in sixth place in the state among Class 3A teams.

Wallenpaupack was a last-place team in Lackawanna Division 1 last season, but returns its top players, Kevin Wortman and Grady Hearn, from a squad that was frequently competitive with those above it in the standings.

Defending District 2 Class 2A champion Scranton Prep brings an 83-match Lackawanna League unbeaten streak into the season and will be playing against only small schools in the league schedule following divisional realignment according to enrollment.

Fourth-ranked Montrose opens the season on a 15-match league winning streak while fifth-ranked Lackawanna Trail comes in with a 21-match unbeaten streak.

Wyoming Seminary, the third-place team in WVC Division 3 a year ago, is led by the return of state medalist Nick Werner.