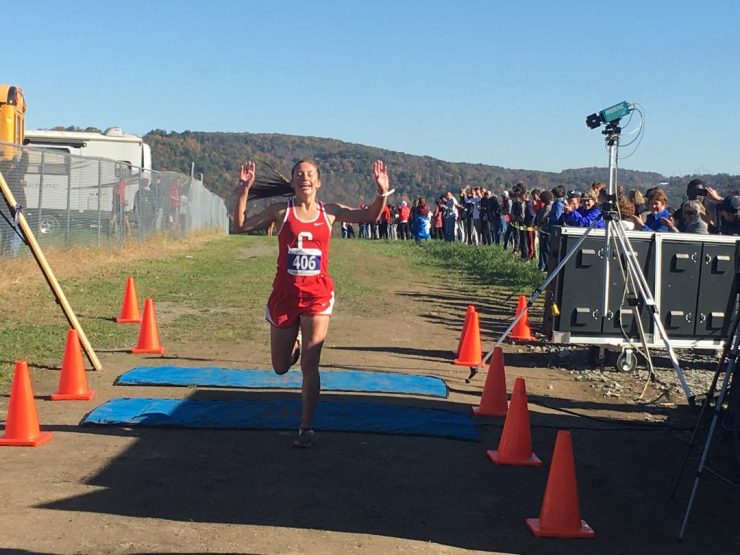 MESHOPPEN – Molly DeMarzo won her third district title and two younger teammates followed her to the finish line as Crestwood used a 1-2-3 finish to end a six-year Abington Heights streak as District 2 champion Thursday morning in the Class 3A girls race at the Wyoming County Fairgrounds.

After holding back for a little more than the first half of the race, DeMarzo cruised past early leader Bella Noreika from Scranton as the two-mile mark approached.

Noreika led the list of five individual qualifiers that will join the Crestwood team in the Class 3A girls race at the Pennsylvania Interscholastic Athletic Association Championships Nov. 6 on the Hershey Parkview Course.

Kaya Meier and Margaret Holderith from Delaware Valley both qualified by taking fifth and eighth.

Hazleton Area’s Jillian Wolk made it by finishing sixth, along with Wallenpaupack’s Morgan Anderson, who was seventh.

DeMarzo let Noreika set the pace in a battle of former district champions. Noreika won in Class 3A as a freshman in 2019 before taking second, one spot in front of DeMarzo, last season. DeMarzo’s first two titles came as a freshman and sophomore and 2018 and 2019 when Crestwood was a Class 2A team.

“Bella took it out and ran a great race, but we just ran our race,” said DeMarzo, who ran with her two teammates before surging into the lead on the way to finishing the 3.1-mile course in 19:31.7.

Kozich said Crestwood’s three leaders did not panic when they saw others in front of them early and Noreika in front longer.

“We knew that it was going to start off really fast,” Kozich said, “and we were going to go moreso even and race smart.

“That worked, so we were really happy. That’s what we’ve been doing all year.”

Novelli said it was soon after her varsity debut that she knew she was part of a special team.

“Even in the summer in training, you could just tell this team was going to work,” Novelli said.

Ellie Kozich and Emily Leicht finished 13th and 16th to finish off the five-runner team score and clinch the district title without any suspense.

The lead runners easily offset Abington Heights being able to pack four runners in between 10th and 15th place.