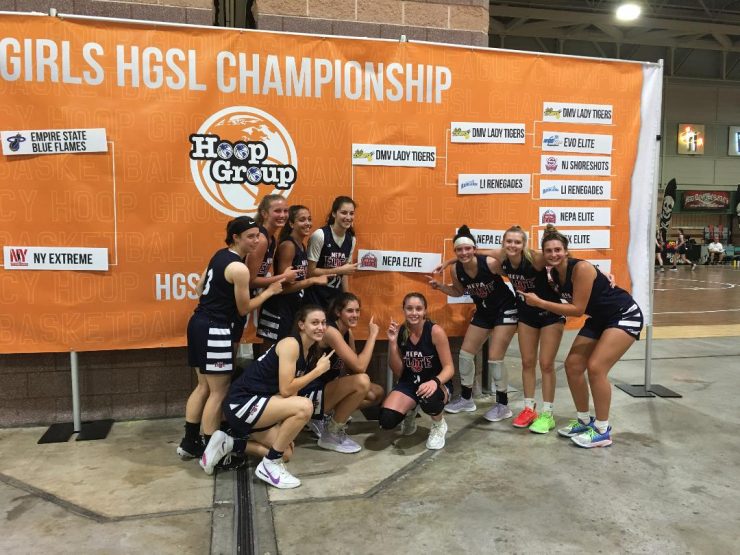 ATLANTIC CITY – The NEPA Elite Clark 17U girls ran away early in the first game and late in the next Sunday, making the first half of their Hoop Group Showcase League title defense look routine with a pair of 17U Platinum Division romps.

NEPA Elite spread the offense around in a 53-25 opening round win over Nex Elite HS Russell-HGSL, then got double-figures scoring performances from Kylie Lavelle, Moriah Murray and Ciera Toomey in a 53-30 victory over New Jersey United.

The defending champions outscored Nex Elite, 34-10, in the first half and New Jersey United, 29-9, in the second half.

“Coming in after Texas, after losing that (PBR Super 64 National) Championship game, we want to get this championship,” Murray said. “We all kind of need to score and do our part.

“That first game, I was feeling it, but then later when I missed a shot, the rest of the team was there to pick me back up.”

Murray, playing limited minutes after sitting out Saturday’s showcase game preliminary to the tournament, needed just 1:35 to hit her first two 3-pointers and combine with one by Maria Belardi in the team’s 3-for-3 start for a quick 9-0 lead.

Murray followed that up with another 3-pointer for a 14-2 lead, making her 3-for-4 with two steals, a rebound and an assist in the first five minutes and making a heavy workout unnecessary.

A Kaeli Romanowski steal, drive and tough finish, followed by a Toomey three-point play made it 19-2.

The NEPA Elite defense made the game’s first 8½ minutes miserable on Nex Elite, which was 0-for-9 on 3-pointers, 1-for-11 overall and had committed 11 turnovers by that point.

Lavelle and Kaci Kranson scored six points each and Leila Hurley added five as NEPA Elite scored the last 13 points of the first half and the first six of the second for a 19-point run to a 40-10 lead with 13:40 left.

On the last possession of the game for any of the starters, Toomey made a steal, went behind her back to maneuver past a defender and pulled up to hit a foul-line jumper for a 44-14 lead with 10:38 left.

NEPA Elite finished with a 17-3 advantage in points off turnovers, the last of which came on Toomey’s basket.

Toomey shared the scoring lead of nine points with Murray and the rebounding lead of five with Kranson and Trinity Johnson.

All 10 players scored, nine of them contributed to a 32-20 lead on the boards, eight had at least one assist and seven made steals as part of the 20 Nex Elite turnovers.

Lavelle went 6-for-8, finished with team-highs of 12 points and 8 rebounds and helped lead NEPA Elite through a dangerous stretch late in the first half against New Jersey United when Toomey went to the bench with three fouls while Murray was already there resting.

“Once they came out, I knew I had to take over more,” Lavelle said. “So, I tried to do that. Then, we kind of made a big run and got up by about 20, so I thought we just all did better from there.”

Murray, who had a team-high four assists and hit three more 3-pointers, and Toomey added 11 points each.

Anna Scoblick’s drive with 1:55 left in the half ended a six-point streak that had pulled New Jersey United within a point.

New Jersey got that close again in the final minute of the half and had a shot at the lead.

Romanowski came up with a defensive rebound with six seconds left and NEPA Elite needed only half of it to score when she pushed the ball up the floor for Lavelle’s drive and 24-21 halftime lead.

“I just took a little more control,” Lavelle said. “I feel like I rebounded more and drove to the basket a little more than I normally do.”

The three top scorers all got involved in the run with Lavelle scoring six points, Toomey adding five and Murray joining Belardi and Romanowski in adding 3-pointers.

Murray and Toomey are also high school teammates at Dunmore. Lavelle is from Riverside, Belardi from Scranton Prep, Romanowski from Western Wayne, Kranson from Holy Cross, Hurley from Jim Thorpe, Johnson from Wyoming Valley West and Scoblick from Abington Heights.

NEPA Elite is two wins away from possibly claiming the first two championships since Hoop Group added the Showcase League as a girls offering. Results throughout the season were used to determine seeds and NEPA Elite (21-6) landed the third seed for the 20-team field.

Rini 17U: Program has a semifinalist in both 17U tournaments. https://nepasportsnation.com/purdy-leads-rini-team-into-semis/.

Roundup: Recapping the day for Butler 15U and Sheehan 16U teams. https://nepasportsnation.com/roundup-butler-team-adds-win/.