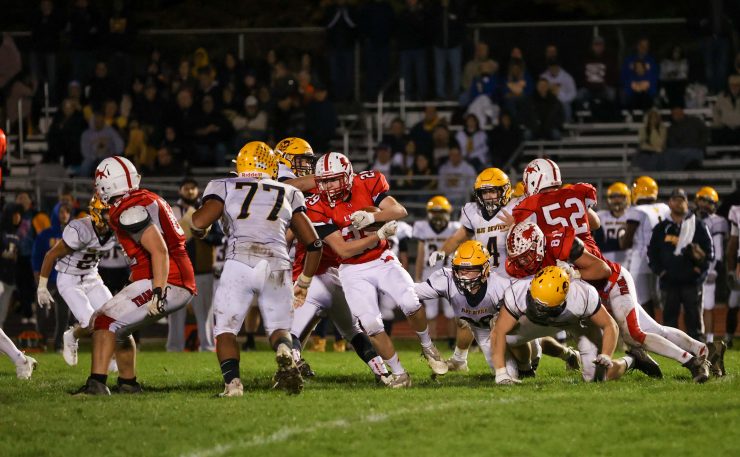 Old Forge, Scranton Prep and Valley View fell in last weekend’s Pennsylvania Interscholastic Athletic Association state quarterfinals, but all three earned the respect along the way that allowed them to remain in the top 10 in their classifications, according to state football rankings determined by PennLive.com.

They are among six teams recognized among the best in the state with the season over for District 2 teams.

Wyoming Area, which had its season end a week earlier, joined them in the top 10 while three other District 2 teams received honorable mention.

After falling to Canton, 20-14, in overtime in a game between the two top-ranked teams in the state in Class A, Old Forge dropped from first to third. The Blue Devils remain in front of two of the four semifinalists.

Scranton Prep dropped from third to fifth in Class 3A after losing, 35-14, to No. 2 Wyomissing.

The Cavaliers are the highest-ranked eliminated team in Class 3A, positioned behind the four semifinalists.

District 2 is well-represented in Class 3A.

Wyoming Area, which fell to Scranton Prep in the district championship game, is 10th.

Lakeland is one of five honorable mention teams.

Valley View dropped from sixth to seventh in Class 4A after a 35-25 loss to Bishop Shanahan, which shot up from eighth to fourth.

North Pocono, which lost to Valley View in the district final, is one of six honorable mention teams around the state in Class 4A.