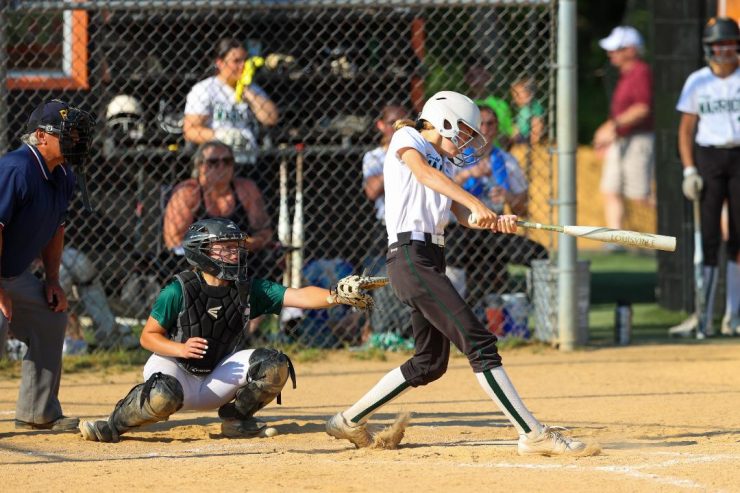 South Williamsport strung together six straight hits in the bottom of the sixth inning Monday at Elm Park in Williamsport to knock Elk Lake out of the Pennsylvania Interscholastic Athletic Association Class 2A softball tournament with an 8-7 victory.

District 2 champion Elk Lake had moved in front, 4-3, in the top of the sixth inning only to have the Lady Mounties regain the lead.

Elk Lake then scored three runs and put the tying and winning runs on base in the top of the seventh before its own rally fell short.

Winning pitcher Alizabeth Schuler, one of three South Williamsport batters to go 2-for-3, drove in three runs. Schuler had a sacrifice fly for a 3-2 lead in the fifth, then a two-run single to cap the five-run outburst in the sixth.

Gianna Goodman, who had an inside-the-park home run, and Lily Reidy each went 2-for-3 with two runs scored.

Claire Alexander was 2-for-4 with two runs and two RBI.

Alexander fouled off a pair of two-strike pitches with the bases loaded and one out in the sixth before her single drove in two runs to turn a 4-3 deficit into a 5-4 lead.

Hannah Howell and Layla Weaver started the Elk Lake seventh with a single and a walk.

Schuler recovered to get a game-ending strikeout.

South Williamsport scored runs in the first two innings for a 2-0 lead that it carried into the fifth.

Traver and Megan Johns started the fifth with singles and Cheyenne Horn followed with a game-tying, two-run triple.

After South Williamsport regained the lead, Elk Lake moved in front for the only time in the game in the top of the sixth.

The first three Lady Warriors reached in the sixth.

Marissa Horn led off with a single, then, after a walk, scored on an error.

Megan Johns put Elk Lake ahead with a sacrifice fly that scored Lord.