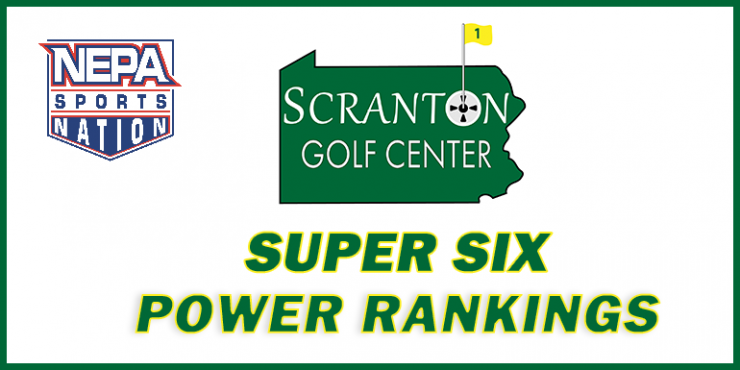 Once-beaten Dallas and unbeaten Scranton Prep combined both division and district team titles to finish as the No. 1 teams in the final Scranton Golf Center Super Six Power Rankings of District 2 teams.

All seven division champions – four in the Lackawanna League and three in the Wyoming Valley Conference – were in the rankings, which also included the Lackawanna’s two Class 3A finalists.

Only one adjustment was made from the previous rankings, moving Riverside back ahead of Montrose and into the fourth spot in the Small Schools. Montrose advanced one round further in the Lackawanna League playoffs, but Riverside did well against a tougher draw, producing the only road win of the quarterfinals and giving eventual champion Scranton Prep a more competitive match in a league semifinal.

Dallas is the Big School No. 1 after winning WVC Division 1, avenging its only regular-season loss in the WVC Class 3A title match and winning the District 2 title.

Scranton Prep is the Small School No. 1 after winning Lackawanna Division 1 and both the Lackawanna and District 2 Class 2A playoff titles.

Both teams advanced to the District 2-4 Subregional Thursday afternoon at Eagles Mere Country Club where berths in the Pennsylvania Interscholastic Athletic Association state tournament are being determined. Scranton Prep is the defending state champion.

The Big Schools finished the same as they were in the next-to-last rankings.

Abington Heights is second, followed by North Pocono, Hazleton Area in a tight grouping of top four teams. Crestwood and Pittston Area are fifth and sixth.

Abington Heights finished second in Lackawanna Division 1, behind Scranton Prep, and ahead of third-place North Pocono by sweeping the Trojans in divisional play.

North Pocono came back to beat Abington Heights, 5-4, while playing at home in the league’s Class 3A final to determine the district finalist.

The Trojans, again playing at Elmhurst Country Club, then came within a stroke of Dallas in the District 2 championship match.

Hazleton Area went unbeaten in the WVC regular season while winning Division 2 before falling to Dallas by four strokes in the WVC’s Class 3A title match.

Small school teams were a force during the regular season and produced the better scores while playing the same course on the same day in the District 2 team championships.

Scranton Prep, the only Class 2A team in Lackawanna Division 1, never lost a match, but had slipped behind Lake-Lehman in the rankings for part of the regular season. The only time the Cavaliers were beaten all season was in tournament play when they finished second behind North Pocono at the Bob Simons Classic.

Lake-Lehman, which suffered its only loss on a back-nine comeback by Scranton Prep in the District 2 Class 2A championship match, wound up second.

Hanover Area, which only lost to Lake-Lehman in WVC play, twice in Division 3 and once in the conference’s Class 2A title match, is third.

The remaining spots are held, in order, by Lackawanna division champions Riverside, Montrose and Lackawanna Trail.

Montrose won Division 4 and had both non-league and league semifinal victories over Division 3 champion Lackawanna Trail.