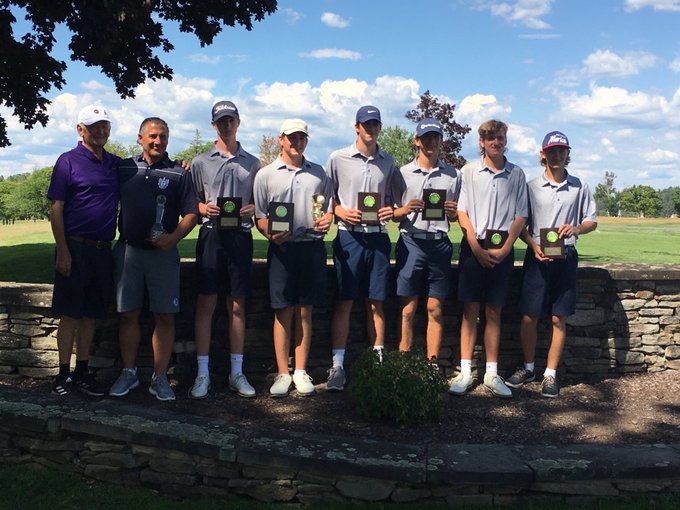 Just as they had in Monday’s Bob Simons Classic at Elkview Country Club, Robert Munley, Cade Kelleher and Luke Morgan each shot in the 70s to lead Abington Heights to the victory.

Munley tied for second individually with a 76 while Morgan and Munley each shot 78 for a three-player score of 232 and a nine-stroke victory over District 2 rival Hazleton Area.

Connor Abel’s 84 would have been good enough to keep the Comets on top, if it had been needed.

Robbie Lucas, playing for the Abington Heights “B” team in the event, was fourth with a 77.

Hazleton Area was led by Connor Matteo, who shot a 78 to finish as part of the fifth-place tie with two Comets and other players.

Aaron Fulkroad from Millersburg shot 3-over-par, 73 to win by one shot over Munley and Damen Milewski from Lourdes Regional.

Altoona was third with 250, Selinsgrove fourth with 255 and Athens fifth with 256.

Ella Oswald shot a 101, leading the Hazleton Area girls to second place with a 338, behind a 302 by Athens.

Cailyn Schell from Jersey Shore shot a 76 to win the girls individual title by 15 shots.

The Comets are the only unbeaten in the division after handling the Warriors, who began the day tied for second place in the standings.

Mark Korea and Andrew Nocito led the Patriots (3-1) by each shooting 6-over, 42 at Wilkes-Barre Golf Club.

Josh Brown and Landon Kandrovi each shot 6-over-par, 42 in the win.

Aidan Montross added a 46 and Ethan Tench a 47.

Dallas was led by Rhys Bonvie and Ryan Vallach with 44s. Kaden Coyne shot a 45 and Brad Kogler a 47.

Lackawanna Trail, Scranton Prep and Holy Cross all won to join Montrose at 3-0 on top of the Lackawanna League Class 2A Division.

Gavin June and Lorenzo Domiano each won the first five holes of their singles matches to lock up their points early as Lackawanna Trail defeated Carbondale, 8-1.

Sabrina Rogalla won her singles point, 5 and 3, while combining with Domiano to do the same in better-ball.

The Trojans were fifth and Buckhorns sixth in the preseason Riverfront Sports Super Six Golf Power Rankings of District 2 teams.

North Pocono improved to 2-0 with the win.