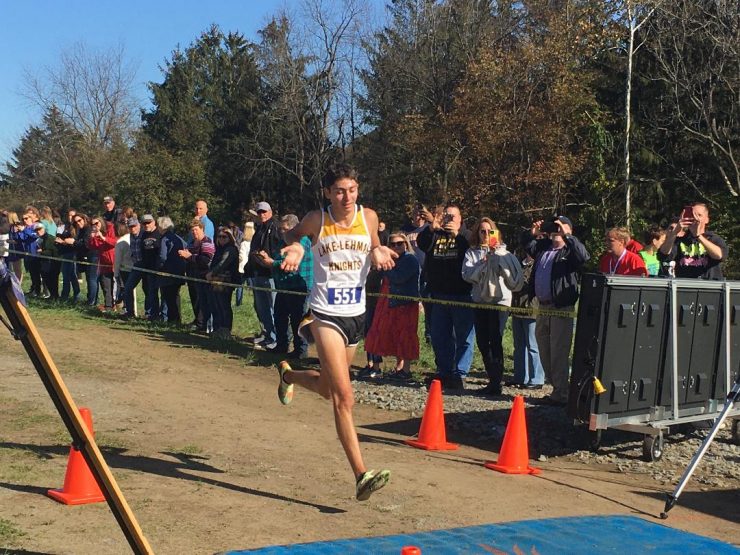 All three came away with more than their individual accomplishments to celebrate.

Holy Redeemer put it all together to win the district championship in a season when it finished third in the Wyoming Valley Conference, beating the two teams it finished behind in those standings.

The Black Knights joined the Royals in knocking off the Crestwood team that had won the WVC Coaches Ed Narkiewicz Championship Meet a week earlier.

When Smith saw that Brady had fought off some late challengers for the third position, he knew it was a boost to the team.

“We came around that final uphill and I looked and I saw Tommy behind me in third place,” Smith said. “I gave him a little grin.”

Brady noticed Smith’s reaction and joined him in watching to see how soon their teammates would follow. Aiden McDonald, Donato Strish and Spencer Smith delivered.

“Crestwood had beat us twice before,” Brady said. “I knew it wasn’t out of the realm of possibility that we could win, but everything needed to come together today and it definitely did.”

Strish missed a medal by one place, but provided one of the keys with his 21st-place finish. Late in the season, coach Dylan Gearinger feared health issues might keep Strish out of the lineup.

“Take him out of the mix and we lose,” Gearinger said.

Instead, the Royals were in position to finish off the team title when Smith completed the team score by coming in 29th.

“When we saw Spencer, our five, come in and I knew at that point we won the race,” Brady said.

There was much more uncertainty about which team had landed the second team berth.

Lake-Lehman and Crestwood had shared first place in the WVC in the regular season at 15-1 and again they were close.

Too close to know for certain until the official results came out and showed Lake-Lehman had the 87-88 edge.

“That’s why it’s a cliché and every coach says it, ‘every place is big at an invitational,” Lake-Lehman coach John Sobocinski said. “Every place, and I literally said that to my entire team throughout the duration of the race, encouraging these guys along.”

Hockenbury led the way with his time of 16:59 to win by nearly 24 seconds.

“It’s not to say that we knew he was going to win, but the assumption was if he does his job, he’s going to be district champ,” Sobocinski said. “Really our two, three and four were going to be really big and they’ve been solid all year – Casey Weaver, Michael Serafin and Will McCarroll.

“Will’s been off his game a little bit, but he got it back mid-race and finished 24th.”

McCarroll followed medalists Weaver and Serafin, who were 11th and 16th, but the Black Knights still needed a little more.

With usual fifth runner Brady Newman falling back while trying to run through an injury, Dabsheh moved up. He passed some runners late in the race, picking up the valuable places the Black Knights needed for their eventual one-point edge.

“He passed a couple guys coming up the hill,” Sobocinski said.

There were 10 individual state spots available to the top runners other than those from the two team qualifiers.

Gabe Pacyna from fourth-place Mid Valley led that group with his own fourth-place finish and teammates Vincenzo Iacavazzi (sixth) and Michael Novak (13th) will be joining him in Hershey.

Crestwood’s Weston Medvetz and Jack Scanlan made it by placing fifth and ninth.

Dallas also had two runners make it with Bryce Phillips in 10th and Aiden Cotter 12th.

The other qualifiers were Valley View’s Ethan Williams, Lakeland’s Scott Bevilacqua and Honesdale’s Luke Murray in seventh, eighth and 14th.

Dallas followed Mid Valley in the team standings, taking fifth with 134 points, followed by Scranton Prep and Honesdale in sixth and seventh in the 13-team race.

For full team scores from Class 2A boys, times of all the medalists and results of other races, go to: https://nepasportsnation.com/district-2-cross-country-results/.