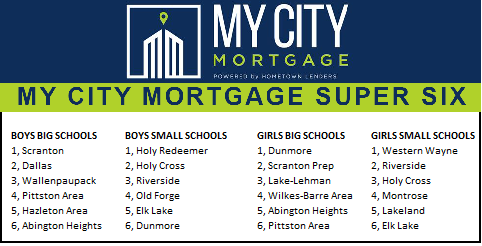 The Western Wayne girls became the first division champion of the 2021-22 basketball season in District 2 and used that accomplishment, along with an impressive effort in a loss to a highly regarded larger school, to regain the Small School No. 1 spot in this week’s My City Mortgage Super Six Power Rankings of District 2 teams.

An eventful week in which the last unbeaten and six of the eight No. 1 and 2 teams fell, while a team also clinched at least a first-place tie, led to significant change in the rankings. The rankings were released on our partner website, NEPABasketball.com, early Sunday afternoon before the one boys and one girls game on the Sunday schedule.

The Dallas, Wallenpaupack, Pittston Area, Riverside and Old Forge boys teams, as well as the Lake-Lehman and Lakeland girls teams, also moved up this week. The Elk Lake boys and Pittston Area girls rejoined the rankings.

The Scranton boys, Holy Redeemer boys and Dunmore girls all held their No. 1 spots, as has been the case all season.

Western Wayne moved up from second to first, one week after dropping out of the first spot.

Montrose won its only game to remain in fourth.

Lakeland went 1-1 to climb one place into fifth.

Elk Lake dropped from fifth to sixth after being upset by Blue Ridge, 42-34, in its only game.

The Dunmore girls were the only No. 1 team to go through the week without a loss. The Lady Bucks remained first among Big Schools with a 61-33 victory over Riverside to solidify their Lackawanna Division 3 lead.

Lake-Lehman jumped from fifth to third, winning twice by a total of 71 points to extend its winning streak to six games.

Wilkes-Barre Area and Abington Heights each lost its only game to tumble one position into fourth and fifth.

Abington Heights wound up playing Sunday afternoon and beating West Scranton. That win is reflected in the records listed below.

With the only loss coming to Big School No. 1 Scranton, 56-46, the Royals were able to hold first among Small School boys.

The Royals lost to another powerhouse Sunday, falling to Allentown Central Catholic in a game that is also included in the records listed on this site.

Holy Cross won three more times to stretch its winning streak to nine and hold on to second.

Riverside went 2-0 and Old Forge was 3-0 to move up one place each into third and fourth.

Elk Lake rejoined the rankings in fifth after regaining the Lackawanna Division 4 lead with a 73-59 victory that avenged an earlier loss to Blue Ridge. The Warriors also defeated another contender, Mountain View, 59-44.

Dunmore lost to Riverside and Holy Cross by 19 and 17 points to slip from third to sixth.

Blue Ridge, the former No. 6, lost to Elk Lake and fell from the rankings.

Scranton suffered its first loss, falling on the road to Wallenpaupack, but came back with three straight wins to hold on to No. 1 in Big School boys.

Dallas, Wallenpaupack and Pittston Area combined to go 8-0 and all moved up, taking over second, third and fourth.

Wallenpaupack and Pittston Area knocked off division leaders, Scranton and Hazleton Area, and each won another game.

Hazleton Area fell from second to fifth when it went 1-2, losing to Dallas and Pittston Area for its first two losses within District 2.

Abington Heights won its only game and remained sixth.