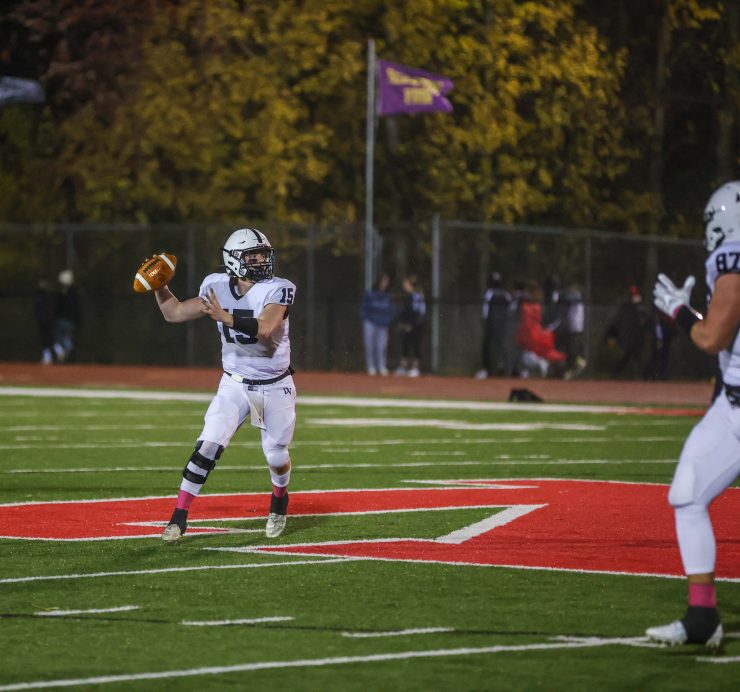 MILFORD – The Delaware Valley Warriors did not quit working when their season got off to an 0-3 start.

They certainly were not about to stop seeking a solution when Hazleton Area built the momentum to threaten to take away the District 2 Class 6A football championship.

Backed up into the Red Zone with their lead in jeopardy, the Warriors attacked.

Tim Kizis rushed off the right edge, forcing a throw under duress and Ryder Machado jumped on the underthrow, picking it off and racing 94 yards for the clinching touchdown in a 35-20 victory over Hazleton Area Friday night.

The win was the ninth straight for the Warriors and gave them six straight Class 6A titles.

“I’m just really proud of these guys,” Delaware Valley coach Keith Olsommer said. “When you start 0-3, a lot of teams quit on you. They kept playing and playing.

“We started to get a little better and better. This tonight is an indication of the character and some of the things these guys were able to hold together.”

The Warriors held together one last time against their most frequent challenger for District 2 Class 6A supremacy.

Delaware Valley entered the fourth quarter with a 15-point lead, but Hazleton Area scored one touchdown and drove from its 6 all the way to the Warriors 7 in pursuit of the tying score.

“They had the momentum,” Olsommer said. “We weren’t doing much to slow them down.”

A five-yard penalty pushed Hazleton Area back to the 12.

Kizis and Machado took it from there. Kizis, with lineman Joey Pisano charging close behind, chased quarterback Tyler Wolfe back.

“He’s a helluva quarterback and he wasn’t able to follow through on the throw and it wound up coming up short,” Olsommer said.

Once Machado stepped in front of the pass in stride while other players were moving in the opposite direction, the play and the threat were essentially over.

The 94-yard sprint that followed was a mixture of formality and celebration.

“I knew I was gone,” Machado said.

Nate Melnick provided the only block Machado might have needed early in the return. The rest of it was a parade in front of the Delaware Valley bench and home bleachers, surrounded in blue with even a few teammates out in front to escort him into the end zone with 4:12 left.

Just to make sure, Harlem Cook added one more interception a minute later.

Hazleton Area’s Wolfe completed 18 passes for 227 yards and 2 touchdowns, but the Delaware Valley defense countered with 4 interceptions – 2 each by Cook and the Machados, Ryder and his brother Landon.

“I love my brother,” Ryder Machado said. “This is so amazing.

“We’re going to be talking about this for years.”

Delaware Valley had many other contributors to the latest championship effort.

Joe Sciascia and Paulie Weinrich earned the tough yards and two touchdowns each on the ground. Sciascia surpassed 1,000 rushing yards for the season with 91 on 21 carries. Weinrich had just 18 yards on 5 carries, but his 4-yard touchdown with 18 seconds left in the third quarter was an impressive display of both power and willpower.

Justin Kalitsnik caught a team-high 4 passes for 34 yards while joining Cook and Machado in leading the defense.

The two interceptions were just part of the story for Cook. His blocked extra point was the only difference between the two teams for stretches of 3:55 and 8:39 and was the reason Hazleton Area was still going to have to go for a two-pointer if it completed the late scoring drive.

Machado added three tackles, including one for a loss, two assists and two broken-up passes to his pick six.

Kalitsnik was the team’s top tackler with six tackles and four assists.

Gabe Tidbridge and Weinrich chipped in with four tackles each. Tidridge also had four assists while Weinrich assisted on two tackles and broke up a pass.

Matthew Buchman caught 7 passes for 72 yards for Hazleton Area while carrying 15 times for 66 yards and a score. He also joined Mitchell Masten in making five tackles each on defense.

The Cougars finished 8-4. Their own slow start featured 2 straight losses before winning 8 of the last 10.

Both losses came in spirited battles with the Warriors.

“There’s a reason we have played them as many times as we have, twice a year and usually in Week 12,” Olsommer said of Delaware Valley’s district or subregional championship opponent in four of the past five years. “And, they continue to close the gap on us.”

The final margin was greater than in the regular-season meeting, but then again, the title game rematch was a different style game.

Delaware Valley won, 14-9, at Hazleton Area midway through the season.

That point total was surpassed in the first half Friday night.

Cook’s first interception set up Delaware Valley for its second possession starting at the Hazleton Area 34.

The Cougars made it difficult but the Warriors scored by converting a third-and-nine and a fourth-and-five before Sciascia went off left tackle for the 2-yard touchdown on third-and-one for a 7-0 lead with 5:26 left in the first quarter.

Hazleton Area answered with a 15-play, 64-yard scoring drive in which it converted three third downs and a fourth down.

Shamany caught his first touchdown pass on fourth-and-goal, but Cook blocked the extra point to keep Delaware Valley ahead 7-6 with 10:07 left in the first half.

Those were the first two of four straight scoring possessions.

Ross hit Cook down the right sideline for 21 yards on third-and-nine. Weinrich converted a third-and-short, Ross found Aiden Black for 23 yards on the next play and Weinrich followed by scoring from the 1 midway through the second quarter.

Hazleton Area went 69 yards in 7 plays as the defenses continued to find it difficult to get off the field. Wolfe went deep down the middle to Buchman on third-and-17 and the running back wound up making the catch on his knees, pulling in a deflected pass for 24 yards. Two plays later, Buchman broke a tackle and headed for the left corner for a 29-yard touchdown run.

The defenses fought back over the last 2:48 of the half with Hazleton Area’s Christopher Sachs and Delaware Valley’s Landon Machado trading interceptions.

Delaware Valley changed the pace of the game to begin the second half, going primarily no-huddle and producing scoring drives of 76 yards on 10 plays and 64 yards on 6 plays.

“One of the things we said at halftime was, ‘we need to pick the pace up’,” Olsommer said of an approach the Warriors turn to frequently. “ … C.J. was pretty darn good in the second half for us and we were able to execute a little bit.

“I think sometimes you practice it so much and do it so much that when you don’t do it, the kids don’t play as well. I thought the offensive line, when we started to pick up the pace, played pretty well for us.”

The combination of Ross’ accurate third-quarter passing and Sciascia’s consistent second-half running – he went for 58 yards on 12 carries without ever gaining more than 10 on one carry – seemed to be putting Delaware Valley in control of the game.

Hazleton Area, however, showed its own resilience.

Shamany got open on a streak up the right hashmark and caught Wolfe’s 51-yard touchdown pass with 11:02 remaining.

“We told our guys after that, ‘get one more stop and we’re going to tie this football game’,” Hazleton Area coach Dennis Buchman said.

The Cougars took care of the first half of that equation. They forced a punt, which Kizis sent 46 yards to place them at their 6.

Wolfe then completed four straight passes, all for at least 14 yards to move into the Red Zone and set the stage for the game’s decisive play.

Delaware Valley moves into the state playoffs where it will play State College, a 17-14 winner over Williamsport in Friday’s District 4-6 Class 6A Subregional championship game Friday night, at Hazleton Area’s Harman-Geist Stadium at 7.

Delaware Valley was incorrectly informed Friday night that it would be home, something that would have been true if Williamsport was the opponent.

There was confusion in advance communication from the PIAA to district offices regarding a new rule that allows for the possibility of home games in a team’s entry into the state tournament. Home games are not allowed in cases where teams from the eastern and western half of the states play each other unless those districts are contiguous.