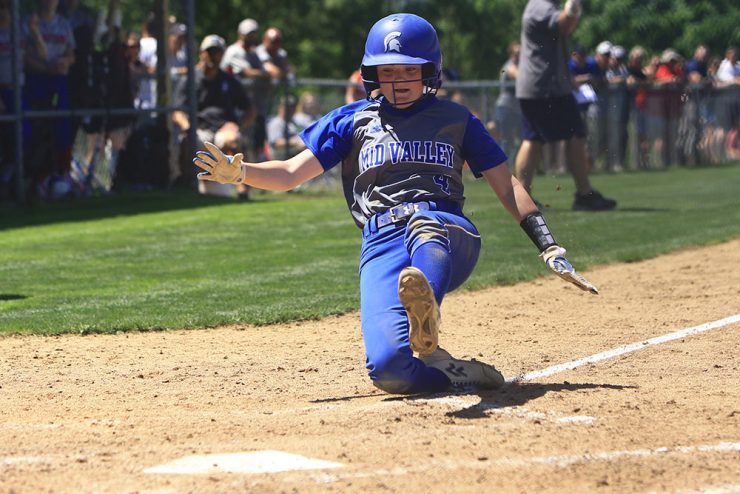 Mid Valley holds on, repeats in 3A

DUNMORE – Mid Valley threatened as much as it scored in the three-inning Wednesday portion of the weather-interrupted District 2 Class 3A softball championship game.

When play resumed Thursday, the Spartanettes scored in each of three at-bats, producing just enough offense to hold off an inspired rally by Lake-Lehman to win their third straight title, 7-6, at Marywood University.

Mid Valley dominated the fourth inning – getting three straight strikeouts from Maranda Runco, who also came out sharper Thursday than she was Wednesday, and scoring three times in the bottom of the inning for a 5-3 lead.

Mid Valley built a 7-3 lead, then watched Jillian Ulozas create a scare with the bases loaded in the top of the seventh.

Ulozas, who hit a seventh-inning home run to lift third-seeded Lake-Lehman over second seed and Wyoming Valley Conference Division 2 champion Holy Redeemer in the semifinals, came inches from a grand slam. Her shot to the top of the fence in right field resulted in a three-run triple, putting the tying run 60 feet from home with one out in the top of the seventh.

Runco responded with a strikeout and groundout to end the game.

When the game resumed with the Spartanettes trailing, 3-2, Davis provided the RBI single to force a tie. A throwing error on the play left Mid Valley with two runners in scoring position and Chiara Zavislak followed with the go-ahead, two-run single.

Mid Valley added one run each in the fifth and sixth innings.

Just as they had in the second inning Wednesday, Kaylee Terranella and Emma Kobylanski ripped back-to-back doubles with two out in the fifth to make it 6-3.

Davis led off with a triple and, after Runco was intentionally walked for the fourth time in the game with one out, Courtney Rebar responded with a run-scoring single.

Hailey Kline, Krista Scoblick and Kirsten Finarelli all had singles to load the bases for Ulozas with one out in the seventh.

Mid Valley is the top-ranked Small School team in the Riverfront Sports Super Six Power Rankings of District 2 teams. Lake-Lehman is No. 4 in those rankings, which are for Class 3A, 2A and A teams combined.

Quarterfinal and semifinal roundup in Class 3A: https://nepasportsnation.com/softball-mid-valley-seeking-third-straight-title-in-class-3a/.