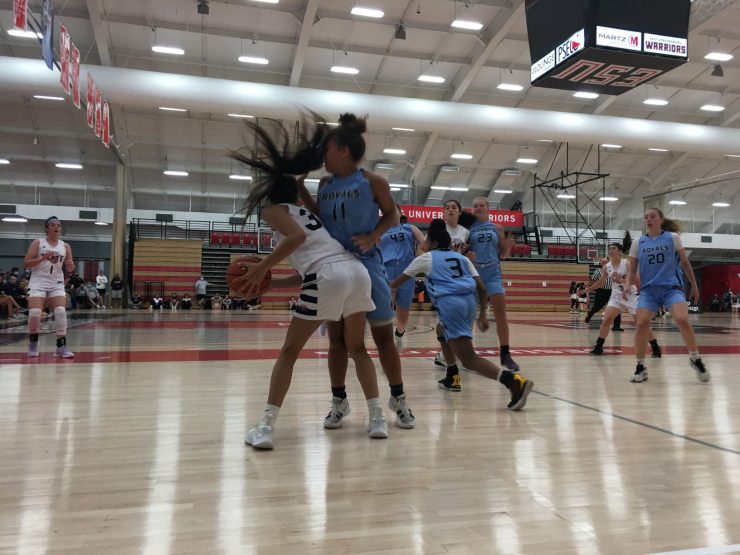 PHOTO: Anna Scoblick gets ready to send a pass out to Moriah Murray (1) for a 3-pointer. (Tom Robinson Photo)

EAST STROUDSBURG – The NEPA Elite Clark 17U girls team used a fast start and strong finish to open the Pennsylvania Showcase at East Stroudsburg University with a 54-36 victory over the Syracuse Royals 2022 in a meeting of Hoop Group Showcase League teams.

Kylie Lavelle led the way during the fast start and Olivia Smelas guided the team down the stretch.

The Royals’ only lead was at 2-0 before NEPA Elite scored the next 14 points.

Lavelle, who finished with 19 points, 6 rebounds and 3 blocked shots, scored the last 8 points of the early streak. Five of the points – a 3-pointer and a two-on-one finish off a feed from Anna Scoblick – came after Lavelle blocked shots.

“I feel like we were really motivated in the beginning,” said Lavelle, a Riverside Class of 2022 player who is verbally committed to play National Collegiate Athletic Association Division I basketball at Drexel University. “It’s our first tournament in a while, so we were just trying to come out strong. We want to bring home the trophy.”

Smelas had 10 points, 9 rebounds and 3 assists with 6 points, 8 rebounds (5 offensive) and 2 assists coming after she came in off the bench with 8:13 remaining.

NEPA Elite doubled the final margin after Smelas returned to the game.

“I feel like our rebounds give a big push for us to get going,” said Smelas, a Jim Thorpe 2022 who is in her first year in the NEPA Elite program. “ … I had to bring some aggression in there.”

Lavelle was 7-for-8, hitting all three of her 3-point attempts, Smelas was 5-for-8 and Moriah Murray was 3-for-5 while adding eight points and three assists.

The Clark team is playing in Pool A of the 17U Legacy Division, which moves into bracket play Saturday night.

“With all of the teams in our bracket, we should have a challenge for the rest of the weekend,” Lavelle said.

Murray is from Dunmore, Romanowski from Western Wayne, Belardi from Scranton Prep and Scoblick from Abington Heights.

The Clark team victory was part of a 5-2 start by NEPA Elite teams.

The NEPA Elite Rini 17U team dominated its opener; the Butler 15U team pulled out two close wins; and the Scoblick 15U team won its first game before a second-half comeback came up short in the event’s last game of the night.

Dougherty and Purdy are from Lake-Lehman, Blume is from Dunmore and Murray is from Honesdale.

The Butler 15U team, playing back-to-back in the event’s first two time slots, started with a 31-29 victory over Junior Clutch and then had an even tighter battle.

Elizabeth Viglone forced overtime by making the second of two free throws for a 40-40 tie.

Isabella Rebar’s 3-pointer gave NEPA Elite a two-point lead in the first overtime, but Shoreshots recovered to tie it again at 47-47.

The only points of the second overtime were a Viglone free throw, followed by a Lily Soller layup off a feed from Gabby Marsola.

Viglone had 4 of her team-high 11 points during the overtime periods.

Ella Cooper hit two 3-pointers in regulation and scored a basket in the first overtime to score eight points.

Viglone is from Dallas, Rebar and Cooper from Valley View, Soller from Pocono Mountain East, Marsola from Wyoming Valley West and Summa from Dunmore.

Emily McDonald led the way in the win with 10 points. Mackenzie Perluke added eight and Ella Wilson had six.

The Magic led NEPA Elite, 25-13, at halftime of the nightcap, but NEPA Elite scored the first 12 points of the second half to tie the game. Sophia Talutto and Wilson each had four of their eight points during that streak.

McDonald is from Abington Heights, Perluke from Wyoming Valley West, Wilson from Lake-Lehman and Talutto from Dunmore.