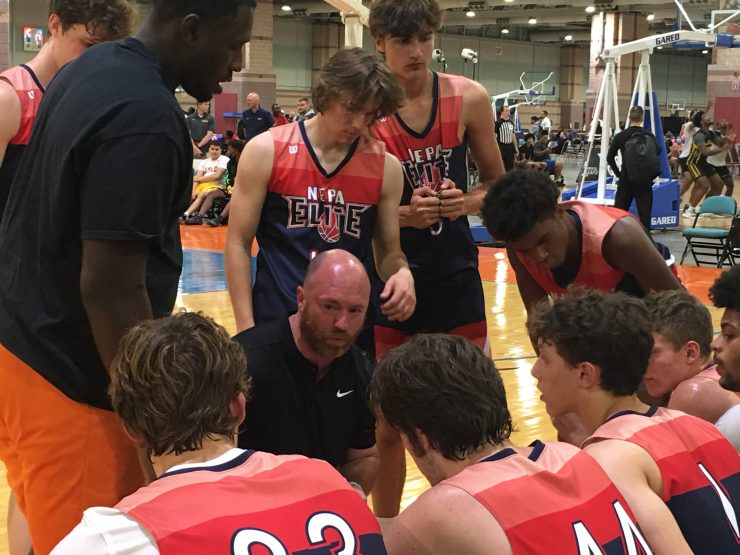 ATLANTIC CITY, N.J. – Brian Coyle looked at his team’s impressive shooting numbers and, instead of thinking of accurate shooting, saw them as confirmation of a day of effective passing.

The NEPA Elite Coyle 17U boys moved the ball effectively on offense and, as a result, moved themselves to the top of the 17U Platinum Division Pool J standings at the Hoop Group’s Atlantic City Jam Fest.

“Our ball movement is great,” Coyle said. “I think when we work to find a high-percentage shot, we’re extremely hard to guard.

“It’s about being unselfish. It’s hard to do that with AAU guys because they’ve always been the man on their high school team.”

Complicating matters was playing in front of major college coaches in a “live” period for the first time in more than a year because of multiple recruiting rules adjustments for the pandemic.

Instead of trying to put on personal shows, however, the Coyle squad found the teamwork necessary to produce wins of 52-46 over Team Mega and 63-51 over PTT-HGSL.

NEPA Elite, which has two games scheduled Friday to conclude the tournament before heading to Spooky Nook in Lancaster County for the Hoop Group Championships, was the only team in the four-team pool to get through the day 2-0.

“Especially during this time in July, where it’s the first time scholarship schools have been allowed out in two years, I’m just really happy with the way we’re playing right now,” Coyle said.

NEPA Elite bounced back from a loss in the final second of a Wednesday night Hoop Group Showcase League game that did not count toward the Jam Fest pool standings.

“I think our defensive effort is making up a lot of ground, too, the way we’re scrambling around and deflecting passes,” Coyle said after his team scored 23 of the game’s first 25 points against PTT.

Sure, the team shot well, going 5-for-8 from behind the arc in the 23-2 start, but it was able to take the right shots because of the passes that came first.

“What I’m always trying to preach is ‘pass the ball’ and ‘passing is a skill’,” Coyle said. “Every pass should come in your shot pocket and with good timing. I want to work the offense until we have a high-percentage shot, whether it’s a layup or a wide-open, 3-point shot.”

Whenever possible, Coyle wants those to replace “contested” shots as often as possible.

“To me, we can get something better, especially early in the offense,” Coyle said.

The points came three at a time early against PTT, which put together multiple mini surges the rest of the way, but never got closer than the final margin of a dozen.

The 23 points were the result of the five 3-pointers and a pair of three-point plays inside by Ethan Meuser.

The only time NEPA Elite scored just two points during that stretch was when Austin Finarelli made a steal and was fouled intentionally as he broke away, leading to two foul shots, which he made, and possession.

Ben Chilson and Finarelli each had two of the 3-pointers and Matthew Prociak had one.

Justice Shoats assisted two of the 3-pointers, one of them after he made a steal, and Meuser set up another by kicking the ball out after the defense collapsed.

Coyle credited Jason Shields with providing an early spark with his defensive energy.

Chilson was 5-for-9, including 3-for-5 on 3-pointers, while leading the team with 13 points and sharing the lead with 6 rebounds.

Finarelli made all three of his 3-point attempts and finished with 11 points and 2 steals.

Meuser had 10 points on 4-for-7 shooting to go along with 6 rebounds, 3 assists and 3 blocked shots.

Shields and Shoats joined in the scoring in the second half when they were a combined 6-for-9 while each scoring all seven of his points.

In the opener, Shoats was more of a scorer, leading NEPA Elite with 21 points.

Matt Prociak and Ethan Meuser each added 11 points while J.J. Walsh had 7.

Shoats and Prociak are high school teammates at Holy Redeemer.

Finarelli is from Dallas, Chilson from Tunkhannock, Shields from Scranton and Walsh from Pittston Area.

Meuser, a recent Wyoming Seminary graduate, is headed to the Hill School in Pottstown for a year of prep school.

A recap of the other NEPA Elite boys teams from Thursday, with their record for the day:

The Wignot 17U team began its tournament Thursday afternoon and lost a pair of games, including the latest game of the night for the club’s teams.

NEPA Elite lost to Pure Basketball, 65-40, in a 17U Expressway Division first-round game before falling into the Sweet 16 Losers’ Bracket where it lost to Maine XL Thunder-Silva, 74-53.

The team got off a decent start against Pure Basketball and led 18-17 late in the first half.

Pure Basketball moved in front 30-25 at halftime, then scored the first 12 points of the second half to break the game open.

Trevor Hardy from East Stroudsburg Notre Dame had 10 of his team-high 14 points in the first half for NEPA Elite.

The Van Zelst 16U team lost twice to wrap up the event winless in three games, all in 16U Platinum bracket play.

Thursday’s games were in a bracket for teams that lost in Wednesday’s championship bracket openers.

Pharos Elite had four of its seven 3-pointers while taking a 34-22 halftime lead.

James Pettinato had 11 of his 18 points in the second half and Danny Nemitz had 10 of his 14 to try to bring NEPA Elite back.

Gabe Gonzales joined them in double figures with 13 points. Hayden Hosie chipped in with eight.

Gonzales scored 11 of his 13 points in the first half against PTT to help NEPA Elite to a 24-23 halftime lead.

Eli Yusavage, who finished with 10 points, and Nemitz each hit two 3-pointers. Nemitz had eight points.

Gonzales and Hosie are both from Holy Cross. Pettinato is from Scranton Prep, Nemitz from Mid Valley and Yusavage from Valley View.

The Miller 16U team opened its tournament in the morning with a 53-34 victory over Grindhouse Hoops in the 16U Parkway Division Pool B.

A 47-39 loss to PSB Philly in the later game of the three-team pool sent NEPA Elite into a Friday 1 p.m. game against Mount Vernon Elite.

Sebastian Fermin had 14 points to lead a balanced scoring effort in the win.

The Joyce 15U team had won its 15U Platinum Championship bracket first-round game Wednesday, but the team dropped two straight Thursday.

KYDA knocked NEPA Elite out of the championship bracket, 71-39, in the morning, then TNBA Ohio-HGSL handed the team a 72-48 defeat in a consolation bracket for second-round losers.

Gabe Tanner had nine points in the championship bracket loss. Will Marion hit two of the team’s five 3-pointers and finished with eight points.

Tanner is from Mid Valley. Marion is from Abington Heights.